At the Fourth International Forum on the PPP (to be held in Tegucigalpa, Honduras in July; see http://www.4foromesoamericano.com/principal.htm ) they will propose Oct. 12, 2003–Indigenous People’s Day–as a continental day of action on the PPP.
Sept. 9-13, 2003, members will join the international mobilization in Cancún, Quintana Roo, Mexico at the Fifth Ministerial Meeting of the World Trade Organization. (See http://www.focusweb.org/ )
In November 2003, Gathering participants will join the protest of the ministerial meetings of the Free Trade Area of the Americas, in Puebla, Mexico.
Youth organizations present at the Gathering will form the Enlace de Resistencia Juvenil (Youth Resistance Network), a national network of youth organizations confronting the Plan Puebla Panama, and hold their first meeting on Aug. 9, 2003 in Oaxaca City, Mexico.

Wendy Call is a freelance writer who divides her time between Massachusetts and Oaxaca. She is working on a book entitled No Word for Welcome: Mexican Villages Face the Future , about indigenous communities in Oaxaca and globalization. She can be reached at < wendycall@world.oberlin.edu >.

Public Relations Firm to the Rescue of Plan Puebla-Panama 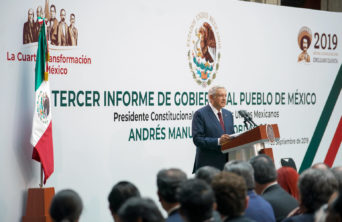