Twenty years ago, on September 19th 1985, an 8.0 earthquake struck Mexico City. Over 20,000 people died that day, or in the aftershock the following day. A nation mourned, surrounded by a devastation unimagined in the complacency of urban daily life. But as in the 2005 hurricane that hit New Orleans, the wreckage revealed that the fault lay not so much in the natural disaster as in disasters of the human variety.

Among the earthquake victims were hundreds of seamstresses who worked in the sweatshops of a downtown zone called San Antonio Abad. The death toll that mounted in the weeks after the earthquake was boosted by shop owners who used heavy equipment to remove sewing machines and industrial goods while leaving women workers hopelessly trapped in the ruins.

There is only one gain that natural disaster and the human disasters of free trade, unemployment, and sexism cannot take back–the change within. “Before we were completely submissive,” says Marisol. “If they told us to go back in to work in a falling down building, we went. But now none of us will do what is unjust. As people, our way of thinking has changed.”

The drive to privatize water distribution and resources is gaining steam in Latin America. Although transnational water companies have suffered setbacks in places like Puerto Rico, Bolivia, and Uruguay, they continue with plans to appropriate the region’s hydrological resources–rivers, aquifers, wells, and aqueduct systems.

In April, over 400 participants from Mexico and countries throughout the hemisphere met in Mexico City at the First People’s Workshop in Defense of Water. The workshop brought together small farmers, indigenous peoples, labor union representatives, members of urban movements, researchers, students, and civil society groups to compare notes and share their experiences with privatized water services and attempts to transfer water management to transnational companies. Participants also discussed possible pathways toward consolidating and furthering the defense of the liquid as a human right for everyone, managed in a sustainable, democratic, and responsible manner.

Maude Barlow, Canadian activist and co-author of “Blue Gold,” participated in the Workshop and in an interview with Radio Mundo Real she sent a message to Latin American governments: “I understand that the states of Latin America are going through difficulties in financing the public system of water supply and I know that they have also a huge debt with the First World. But they are making a big mistake by allowing these corporations to enter their communities and administer the water system just for the profits it generates. This would cause even more poverty, more pollution. The corporations do not take on any risk, but obtain all the benefits. It is local people who bear the risk, and it’s the World Bank that pays for the corporations to be risk-free. It is very important for governments to say ‘no’ to these corporations. In short, they are not there to get water to the people, they are not there out of a concern for the people, or to help the governments. They are there to make money. When they stop making it they will leave.”

Carmelo Ruiz-Marrero is a Puerto Rican independent environmental journalist and environmental analyst for the IRC Americas Program (online at americas.irc-online.org. He is a Research Associate of the Institute for Social Ecology (social-ecology.org) and a Senior Fellow of the Environmental Leadership Program (elpnet.org). He is also founder and director of the Puerto Rico Project on Biosafety (bioseguridad.blogspot.com). His bilingual web page (carmeloruiz.blogspot.com) is devoted to global environment and development issues.

El Alto: A World of Difference
By Raúl Zibechi

Chaos in motion. Street vendors, traders, merchants and stallholders, scouts and agents grind out their incessant songs. Traffic churns along the black, sticky mud that overflows sidewalks and streets. Hundreds of trucks prepare to dive into the hole that is La Paz, and a few others tackle the feat of returning up the interminable slope: it’s La Ceja of El Alto–the political and commercial center of this Aymara city. A bacchanal of colors and sounds. As you stand here, adjusting your senses to the 13,500 foot altitude and icy cold air blowing off the snowy Cordillera Real mountain range, the racket begins to take shape. The whirling noises become a murmur, and the din becomes music. El Alto is chaos, only if viewed from the outside. That is, if viewed from a Western, foreign, or colonial perspective.

The October 2003 insurrection that overthrew President Gonzalo Sánchez de Lozada and tripped up the neoliberal project in Bolivia revealed the existence of an alternative Aymara society that finds its clearest contemporary expression in the city of El Alto. This society has its own political and social institutions, its own economy, and a culture that is clearly distinct from the mestizo-white “official” society built on state institutions and the market economy.

One of the most remarkable, and at the same time hopeful, facts is that all this grassroots activity has been carried out without the existence of centralized, unified structures. Perhaps the fact that the Aymara have never had a State has something to do with it. Nevertheless, the lack of a centralized apparatus has not detracted from the effectiveness of the movements. In fact, the key to this overwhelming grassroots mobilization is, without doubt, the basic self-organization that fills every pore of the society and has made many forms of representation superfluous. For the first time the nucleus of the indigenous movement is located in a large city where strong urban communities have emerged. This foretells profound and sweeping changes in the Bolivian social movement that could very well radiate out toward other populations in other parts of the continent.

Raúl Zibechi is a member of the Editorial Council of the weekly Brecha de Montevideo, a professor and investigator of social movements at the Multiversidad Franciscana de América Latina, and an advisor to various social groups. He is a monthly contributor to the IRC Americas Program (online at http://americas.irc-online.org.)

This cleansing violates the fundamental human rights guaranteed by the charters and other instruments of the OAS and the UN. It also violates the electoral standards that are applied in other countries, and that were applied to elections run by Haiti’s constitutional governments. The persecution and disenfranchisement of political opponents is being conducted openly, notoriously, and under the eyes of the international community. The persecution is not the result of a government unable to assure adequate security, but of a deliberate and multifaceted campaign against opponents by Haiti’s Interim Government. This government’s primary benefactor is the American taxpayer.

Brian Concannon Jr. is the Director of the Institute for Justice & Democracy in Haiti, and is an analyst for the International Relations Center’s Americas Program (http://americas.irc-online.org). This text is based on his presentation before the Congressional Black Caucus Foundation Legislative Forum Panel on September 22, 2005.

Letters from our Readers:

Dear Mr. Barry,
I just finished reading "Immigration Advocates Face Challenges" (http://americas.irc-online.org/am/387). I find it amusing that you cannot bring yourself to use the proper word in this article, that word, sir, is illegal.

As a conservative I have not spoken to anyone who is against immigration per se, however, I and many conservatives favor the elimination of illegal Immigration. I feel you have posited a dishonest argument by your refusal to phrase the argument with the proper terminology. I. along with most conservatives recognize the important role legal immigration has played in making the United States a truly unique country and would hate to see that curtailed.

And yes I think we can remove the illegal aliens freeing jobs for Americans of all colors and stripes. I find it extraordinary that you would go to bat for those who have broken laws to come here over those who have done it in the proper and legal way. If this isn’t unethical I don’t know what that word means.

What to do about Hugo? By Tom Barry (online at http://americas.irc-online.org/am/415)

You really hit the point. We latinos are surprised to see how trade has been put; it’s as if I, an amateur tennis player go to play with Serena Williams who will surely defeat me–only there’s a lot of jobs at stake. But when it’s, let’s say Sammy Sosa against, let’s say Bush, then it’s time to call for protection. This kind of treatment has to end, we all have blood in our veins, and Chavez is the only one who stands for our pride. 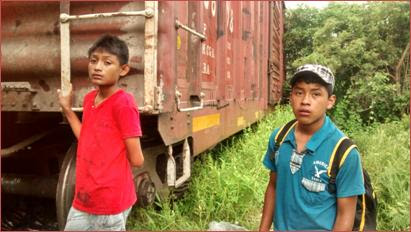