Why has the price of the tortilla risen in Mexico? There are three reasons. First and foremost, it is due to hoarding and speculation by the agro-industrial monopolies. Second, the rising cost of gasoline, diesel, and electricity has affected production, transport, and processing costs. And third, the international price of corn increased due to its use in ethanol production. Only by looking at all three of these factors together, can we understand the recent spike in the cost of Mexico’s staple food.

Mexico is the fourth largest corn producer in the world. Last year, it harvested 22 million tons of primarily, though not exclusively, white corn. That number, however, is dwarfed by U.S. production, which harvested 280 million tons of mostly yellow corn in 2005. The United States controls more than 70% of the world market.

Most corn-producing countries utilize corn primarily as livestock feed. But Mexico, along with most of Latin America, produces corn to feed its people. We are a culture born of corn.

For decades, the National Company of Popular Subsistence (Conasupo, for its Spanish initials), played a fundamental role in regulating the country’s markets by storing, importing, and distributing the grain. With NAFTA, however, this came to an end.

Between 1994 and 1998, Conasupo served only as a kind of "last resort" buyer. In 1998, Ernesto Zedillo gave permission to the major marketers (Maseca, linked to ADM; Minsa, associated with Arancia Corn Products International; and Cargill, tied to Continental) to take control of the national market. Thus, what had been a fairly functional state monopoly in spite of its corrupt practices was transformed into a private monopoly seeking rapid gains.

Dismantling Conasupo was a critical step in privatizing the corn-tortilla market. Other steps taken by the government to that end were liberalization of the price of corn in 1999 and the dissolution of Fidelist, a corn-based subsistence program that fed 1.2 million families in marginalized urban areas.

Additional changes took place in the method of corn processing. For many years, tortillas were produced through a process of nixtamalization, in which small mills and tortilla factories played a critical role. The Salinas de Gortari administration (1988-1994) instigated changes that led to the gradual displacement of the traditional method by processed corn flour as the primary tortilla ingredient.

This change in the production process unleashed a fierce battle between the interested economic powers, which at the time came to be known as the tortilla war. By the end of the dispute, mill and tortilla factory owners had lost considerable ground. By 2003, 49% of tortilla production was in the hands of large industrial producers, and the Maseca Group alone controlled 70% of this sector of the market. Over the past five years, an alliance between the large corn processors and retail chains has shifted the market even more into the hands of the large processing companies.

The major Mexican corn processors control both storage of domestic supply and are the major importers. By controlling inventory, they can manipulate supply and demand to raise or lower prices at their convenience. They acquired a significant part of the 10 million tons produced in the spring-summer harvest in Sinaloa, Mexico’s largest corn producing state. They paid 1,350 pesos (US$123) a ton and accumulated a stockpile of an estimated one million tons of corn or more.

Sitting on this stockpile, the transnational processing companies have begun to play the game of speculation, artificially raising the price by cutting off supply. That same ton of grain they bought in Sinaloa for $123 is now being sold in Mexico City for $320—$197 more than what they paid for it.

While the price of corn in the world market has increased in recent months due to its use in ethanol production, the increase does not explain the price hike in Mexico. Corn trades on the Chicago Board of Trade for approximately $144 per ton, in other words, less than half the price in Mexico City.

The cost of diesel, gasoline, and electricity necessary for the transport and processing of the grain rose during the last few months of the Fox administration, thus affecting the price of the tortilla. But those materials constitute only 30% of the cost of production.

Together the increased cost of inputs and the hike in the international corn price still do not justify the huge jump in prices to consumers. The real problem is speculation by the companies that hold large stockpiles.

Speculative practices have thrived under the free market model that went into effect with NAFTA. That model dismantled state-run development agencies and businesses and led to extremes in privatization. The market is clearly inefficient, borderline monopolistic, and speculative. It is a market where the government—thanks to policies promoted by people with close corporate ties like Luis Tellez and Santiago Levy—has cut off its own arms and is now unable to impose order.

When the national price of corn flour hits the roof, Cargill the Mexican processor and wholesaler comes out the big winner. When more corn has to be imported from the United States, Cargill the U.S. exporter profits. When Cargill the producer exports to other countries, it receives subsidies from the Mexican government. When it bids on the use of port grain terminals, it comes away the winner.

Cargill, founded 140 years ago, is the second largest private company in the world. It employs 149,000 people in 72 countries. Fortune magazine ranks it among the top 20 most important companies in the world. It deals mostly in grains—buying, processing, and distribution—and other agricultural and livestock products.

In its own corporate brochure, it describes itself: " We are the flour in your bread, the wheat in your noodles, the salt on your fries. We are the corn in your tortillas, the chocolate in your dessert, the sweetener in your soft drink. We are the oil in your salad dressing and the beef, pork, or chicken you eat for dinner. We are the cotton in your clothing, the backing on your carpet, and the fertilizer in your field."

The transnational company began its project in Mexico in the 1920s in forestry operations in the northeast until it was expropriated by the post-revolution Mexican government. Two decades later it was back, this time in agriculture. NAFTA and the disappearance of Conasupo left huge gaps in the domestic market, which the giant company rushed in to fill. Since then, its presence in Mexican agro-industry has been unstoppable.

Under NAFTA, corn imports from the United States can be subject to a yearly established quota and duties applied when they exceed the limit. The Mexican government, however, unilaterally eliminated this protection, allowing imports to flood the market duty-free. Between 1994 and 2001 alone, imports in excess of the quota equaled nearly13 million tons. Agro-industrial transnationals like Cargill and ADM sold most of that corn, benefiting enormously. They also benefited from hidden subsidies inherent in export loans awarded by Washington.

Cargill has received a lion’s share of government funds to programs for cleaning, storing, transporting, and shipping to ensure delivery of Sinaloa’s corn to remote areas and to regulate supply over time. When, as in 2006, Cargill exports thousands of tons of corn to other countries, the Mexican government subsidizes the venture.

In 2002, the Federal Competition Commission authorized Cargill to use a specialized port in Guaymas, Sonora, along with Grupo Contri, whose principal business is silos for the harvest, storage, conservation, and marketing of many types of grains, especially wheat, corn, and sorghum. Cargill also controls the port of Veracruz, the largest entry point for grain imports.

Cargill’s operations in Mexico suffered a slight setback in 2001 when Congress approved a tax on fructose. At the time, the transnational was importing nearly 385,000 tons of the corn-based sweetener a year. The tax was contested in international commercial tribunals. The Mexican government lost.

There is reason to believe that Cargill was one of the primary contributors to the tortilla cost increase. The company bought and stored 600,000 tons of corn in Sinaloa at 1,650 pesos ($160) a ton, which sold months later at a rate of 3,500 pesos ($320). Now, with the Mexican government’s decision to lift import quotas to lower the price, Cargill has it made. According to Lorenzo Mejia, president of the National Industrial Union of Mills and Tortilla Factories, "The mills cannot import and will have to seek the services of Cargill."

The company has denied such accusations. In a press release it stated, "Cargill, shares the concern over recent corn price increases with consumers, corn flour and tortilla producers, as well as the livestock industry." It blamed the price increase on the free market, claiming that purchases by the country’s pig farmers have put pressure on the price.

The Fracture of a Model

The increase in the price of the tortilla has brought to light the powerlessness of the Mexican government against private monopolies. Those who control the marketing and production of corn can spark an inflationary spiral and emerge unscathed. The executive power, it seems, has no weapons to fight this battle.

The federal government’s response to the increase has been pathetic. First it offered a voluntary pact to hold tortilla prices at 8.5 pesos. Then it closed a few tortilla factories, making a media show of its actions and claiming to wage a frontal attack on abuse by the responsible factories. It accuses them of not displaying the selling price publicly and tampering with the scales. What’s clear, even though a few isolated vendors have taken advantage of the situation, is that they’re not the ones to blame.

The administration announced that it will allow tariff-free white corn imports. Ironically, those who will obtain the grain are, in part, those responsible for the price increase—the inventory holders. The imports will only serve to harm farmers and campesinos within the country by glutting the market with low-quality corn and contaminating native corn varieties with genetically modified varieties and aflatoxins.

T he Calderón administration has suppressed information on the identity of the speculators, although the national farm support program, ASERCA, has made a detailed report on them. Under the current storage and marketing structure where the government subsidizes commercialization, it must keep track of warehouse inventories.

The tortilla crisis came at a particularly bad time for President Calderón. His government already lacks legitimacy, especially in the eyes of the poor. At the same time, the country now risks suffering an inflationary spiral.

The tortilla crisis illustrates the vulnerability of Mexicans’ access to food. Since NAFTA went into effect in January of 1994, the price of the tortilla has risen 738%. As a result, per capita consumption has decreased. In addition, its quality has diminished.

The supply of Mexico’s food depends much more now on the United States. In some places, native corn land species have been contaminated with imported transgenic varieties. Partly as a result of out-migration, a substantial part of Mexico’s maize production has been transferred from small farms to irrigated zones, which are more ecologically appropriate for other crops. Faced with precipitous price falls for other crops, corn has become one of the few relatively profitable crops.

Today we are experiencing a new tortilla war, which, unlike the previous one of the 90s between companies, is being fought by the large agro-industrial corporations against the poor. It is a war in which Calderón has taken sides with the monopolies that played a fundamental role in giving him the presidency. 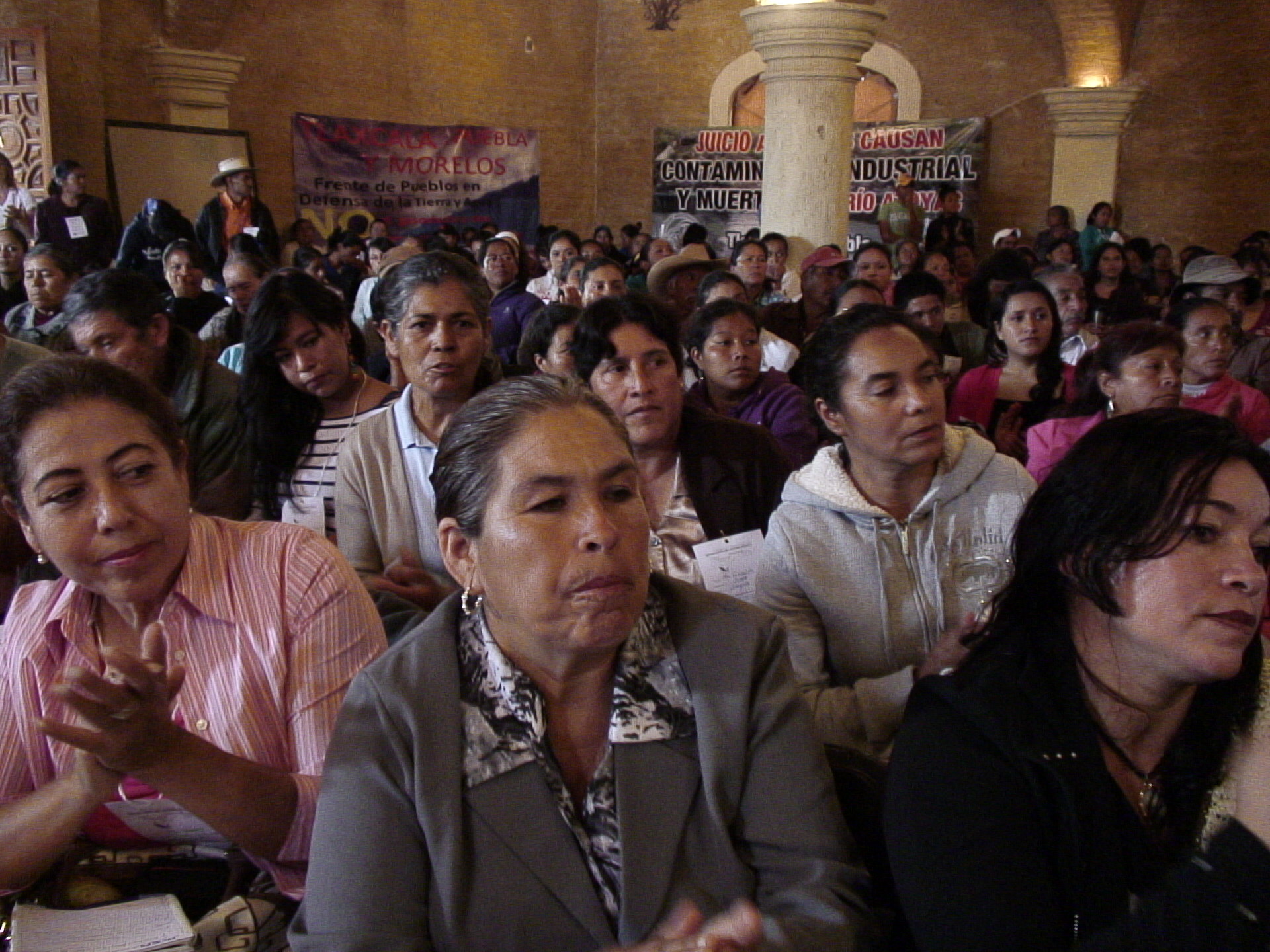