From the Mexican vantage point, foreign direct investment was at the center of the 1994 North American
Free Trade Agreement (NAFTA). Mexico hoped that liberalization would bring an influx of U.S. investment
which, in turn, would fuel its emergence as the continent’s manufacturing platform. In addition to
industrial transformation, foreign direct investment (FDI) was expected to bring environmental benefits
through the growth of cleaner industry sectors, transfer of technology, and better management practices.
It didn’t turn out that way.

At the top of Mexico’s wish list was FDI in the information technology (IT) industry. Beyond benefits
common to all FDI, such as jobs and foreign exchange, the IT industry offered the prospect of industry
upgrading through the capture of cutting edge technology, new skills, including business and environmental
management from multinational corporations (MNCs), and integration into the world’s fastest-growing
industry. This process would move local firms and workers up the global IT value chain, from low-wage
assembly and sub-assembly to knowledge-intensive complex manufacturing and design. A vibrant IT hub
could also be the foundation for broad-based, sustained growth in local employment. Moreover, the IT
industry was considered a "clean and green" alternative compared to traditional smokestack
industries.

From Hub to Enclave

With its geographic proximity to the huge American IT market, Mexico was well-positioned to evolve
into an IT manufacturing hub for North America and the entire Western Hemisphere. Under import substitution
industry policies from the 1940s to the 1960s, Mexican firms had developed substantial local IT manufacturing
and design capacities. In the early 1990s, about 50 Guadalajara firms were producing computers and
components sold on both domestic and global markets.

Fuelled by U.S. foreign investment, Guadalajara’s small but promising IT industry boomed after the
signing of NAFTA. Between 1994 and 2000, FDI in the electronics sector grew by five times and the value
of exports quadrupled. An influx of "flagship" multinationals expanded or newly located in
Guadalajara, including Hewlett Packard, IBM, Intel, Lucent Technologies, and NEC. They were soon followed
by U.S. contract manufacturing companies, including Flextronics, Solectron, Jabil Circuit, and SCI-Sanmina.
By 1998, Guadalajara—newly dubbed "Silicon Valley South"—exported nearly $8 billion of IT
products.

It was a short-lived triumph. During the industry shake-out of 2001-2003, the flagship MNCs shut down
all but sales and service operations of computers and peripherals in Guadalajara, relocating to China
or elsewhere in East Asia. Exports dropped by 60%, FDI fell by 123%, and 20,000 jobs were lost. The
contract manufacturers remained, surviving on more diversified product orders.

While global industry shake-outs are difficult for any country to withstand, Mexico was
especially vulnerable: there was little to keep the MNCs in Guadalajara. Rather than a hub, the industry
evolved as an enclave, with few linkages between foreign IT companies and local firms or markets. Instead
of evolving into a supply base for the MNCs, most local firms went out of business.

Since 2003, MNCs in Guadalajara have recouped to some extent through industrial upgrading from "hard" to "soft" tooling that entails greater worker skill. However, the IT sector in Guadalajara continues to operate in a virtually complete foreign enclave that has few connections to the domestic economy.

The global IT industry presents significant environmental challenges for sustainable industrial development.
Given its "clean and green" image, the IT sector is typically a low priority for regulation
or monitoring in developing countries. Occupational health standards in particular tend to be sketchy
or non-existent. However, there are significant occupational and community health and environmental
problems associated with IT manufacturing and assembly. Most important is the wide variety of highly
toxic chemicals—solvents, acids, alcohol—used in the manufacture of IT products.

In Mexico, the IT industry was largely left to self-regulate. The most important regulation—the
requirement to not store toxic waste on site—was not well enforced. Available evidence suggests that
MNC affiliates may have been less than diligent in the 1990s in managing toxic waste. Although all
of the flagship companies interviewed by the authors said that their hazardous wastes were sent back
to the United States by certified waste handlers—as required by Mexican regulation—none filed notices with Mexican authorities.

The enclave character of IT growth meant that FDI failed to generate much in the way
of environmental benefits since diffusion of clean technology and best practice is accomplished largely
through MNC supply chains. Moreover, Mexico made regulation of the IT sector a low priority, leaving
firms largely to self-regulate.

Why did FDI fail to promote a dynamic IT hub? In the new book The Enclave Economy:
Foreign Investment and Sustainable Development in Mexico’s Silicon Valley based on extensive
field investigations and quantitative analyses, we find that the absence of linkages stemmed from
the intersection of two factors: 1) a shift in the global strategy of IT multinationals towards outsourcing
to large contract manufacturing firms; and 2) the Mexican government’s passive approach to FDI.

In the early 1990s, IT multinationals embraced a new strategy of outsourcing their manufacturing functions,
reconfiguring the industry into a three-tiered "global production network." At the top are
the global "flagships"—companies like HP, Dell, IBM—who have brand name and global marketing and design capacities and who earn the highest profits. Next are the contract manufacturers (CMs) who
assemble components into a variety of electronic products under contract to global flagships. On the
third rung are components suppliers—from large companies to mom-and-pop outfits—who sell inputs mainly to the CMs and operate on razor-thin margins.

Rather than a "regional" strategy—outsourcing to companies located in the countries where
the flagships already had a presence—the flagships embraced a "global" strategy, turning
to California-based firms like Flextronics, Solectron, Jabil Circuit, and SCI-Sanmina. Relatively small
at the outset, these contract manufacturers (CMs) soon swelled to become large multinationals in their
own right, largely by developing a highly efficient, very low-margin global supply base.

Under the new strategy, the flagships bypassed Mexican IT manufacturers and invited "their" CM
assemblers to co-locate in Guadalajara, driving local IT firms out of business. By 2004, more than
37 of the domestic firms that were vibrant through the 1990s were wiped out of business. Both the flagships
and the CMs also bypassed other potential downstream supplier firms: over 95% of all the products and
services used by both flagships and CMs were imported.

Following the passage of NAFTA, the Mexican government adopted a passive stance toward FDI. Industry
promotion policies were dismantled and there was little government support for technical and management
training, research and development, or domestic investment by small and medium size firms.

But relying on market forces alone—what we call a "maquila mindset"—to upgrade industry
has major pitfalls. First, the IT industry is highly concentrated both geographically and in terms
of industry structure. Asia and the United States account for the bulk of manufacturing, creating barriers
to entry for newcomers.

Second, intense cost pressures inside the industry undermine the sustainability of low-wage assembly
work. CMs tend to rapidly shift assembly operations to lower-cost locations when global conditions
change. While wages are low in Mexico relative to the United States, they are much lower in China.

Countries that have successfully built up knowledge assets that allowed them to move up the value
chain—Taiwan, Korea, China, Brazil—have done so with the help of aggressive, pro-active industry policies to overcome market failures: worker and management training; support for scientific research and education; access to credit for domestic firms. They have also promoted and leveraged access to their domestic
markets, while Mexico focused only on promoting exports.

The Guadalajara IT experience offers five policy lessons about how governments may increase the benefits
of FDI for sustainable industrial development. First, taking advantage of the benefits of FDI requires
governments to explicitly set development goals and to integrate FDI into their achievement.

Second, policies also need to increase the capacities of domestic firms to fully integrate and move
up the value chain. Mexico’s experience shows clearly that treating FDI as an end in itself rather
than as part of an overarching development strategy is more likely to generate enclaves than broad-based
growth.

Third, relying on low wages alone to attract FDI leaves developing countries vulnerable to pull-out
by MNCs. Developing a local supply base and markets enhancing the likelihood that MNCs will stay through
crisis times and make additional investments.

Fourth, garnering environmental benefits requires pro-active environmental policy. The expectation
of MNC "best practice" was not borne out in Mexico. As a result, Mexican-based firms do not
meet the new, high environmental standards of the European Union and will be locked out of that market.

Fifth, the benefits of FDI in IT manufacturing are limited for developing countries. Significant barriers
to entry, even at the level of third-tier suppliers, suggest that it will be very difficult for developing
countries to gain a foothold in the global IT industry in the absence of strong government policy and
simultaneous changes in MNC strategic interests. Even with pro-active industry policies, it may not
be possible for late industrializing countries to move much beyond assembly and semi-skilled manufacturing. 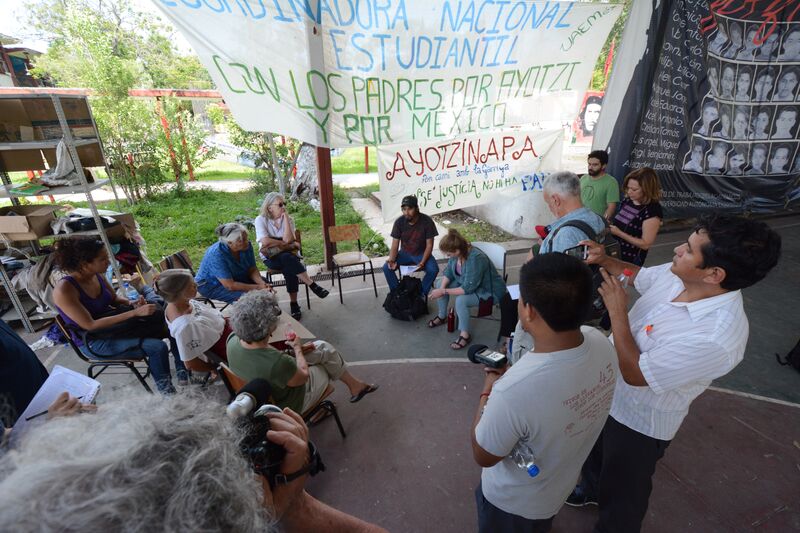