The US-based Institute for Agriculture and Trade Policy (IATP) is organizing a major "Lessons
from NAFTA: Building a New Fair Trade Agenda" conference in Minneapolis, Minnesota this coming
October 22-23.

The Americas Policy Program is a co-sponsor of this conference and on October 23 program director
Laura Carlsen will be speaking on a panel on NAFTA and immigration with Amy Shannon and Oscar Chacón,
of our partner organization Enlaces America, and others who work in immigration issues in the U.S.
Laura will also speak at a plenary session on the Security and Prosperty Agreement at 2:00.

To register or find out about the conference, please go to http://events.iatp.org/index.php?q=node/4.

Fujmori’s Trial: An Opportunity for Peru
By Raúl Zibechi

The Chilean Supreme Court’s extradition to Peru of ex-president and dictator Alberto Fujimori could
contribute to the consolidation of Peru’s fragile democracy and may even reduce the culture of fear.

Multinationals and the "Maquila Mindset" in Mexico’s Silicon Valley
By Lyuba Zarsky and Kevin P. Gallagher

Foreign investment has been widely presented as a panacea for developing countries, a way to create
good jobs, reduce poverty, and kick-start sustainable modern industries. The Enclave Economy calls
this prescription into question. The authors show that Mexico’s post-NAFTA success in attracting foreign
direct investment to its information technology sector, particularly in the Guadalajara region, did
not translate into the promised social, economic, and environmental benefits. Foreign investment created
an "enclave economy" the benefits of which were confined to an international sector not connected
to the wider Mexican economy. Charting the rise and fall of Mexico’s "Silicon Valley," the
authors explore issues that resonate through much of Latin America and the developing world.

Lyuba Zarsky is a professor at the Monterrey Institute for International Studies, and Kevin Gallagher is a professor at Boston University. Both authors are senior researchers at the Global Development and Environment Institute of Tufts University and analysts for the Americas Policy Program at www.americaspolicy.org. This brief outlines the arguments in their new book The Enclave Economy: Foreign Investment and Sustainable Development in Mexico’s Silicon Valley (MIT Press).

Interview with Immanuel Wallerstein: The Inevitable Decline of the American Empire
By Raúl Zibechi

In the course of his visit to the Southern Cone of South America, the American sociologist Immanuel Wallerstein spoke on one of his favorite subjects: the end of the United States’ hegemony—which, he believes, will be definitive within the next decade. But he also let it be known that in the course of the next two or three decades we will be living in a post-capitalist world that could either be much better, or worse, than the present one.

The interview focused on the emergence of a multi-polar world and the present situation that Latin America finds itself in.

To the people of Costa Rica:

I have a daughter there and am concerned about the welfare of your country. Under no circumstances
should you have dealings with the Bush regime. They are criminals who’ve taken over this country and
ruined it as they will yours. Take serious heed, here. These thugs don’t represent Americans. Eighty-nine
percent of us hate their guts. Resist by any means necessary their intrusions into your beautiful country.

In response to Plan Mexico and the Billion-Dollar Drug Deal:

A more sensible approach would be to simply de-criminalize these "drugs," thus putting these "criminals" out
of business, and saving us billions in "enforcement" costs. Regulation would certainly be
much cheaper and have a greater chance of success. More draconian "enforcement" efforts just
deliver greater profits into the coffers of the current "criminals." 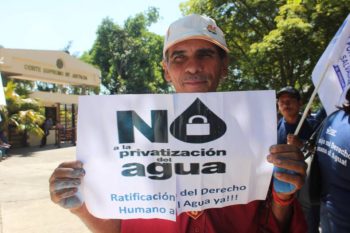