Without fanfare and with the apathy emblematic of the campaign, what everyone expected came to
be. The first lady, senator, and presidential candidate for the currently ruling Front for Victory
Party (FPV), Cristina Fernández de Kirchner, won a comfortable victory in the first round.
Thus, with 44.92% of the vote, on Dec. 10 she becomes the first woman in Argentine history to accede
to the presidency by popular vote.

Her first speech as president-elect was brief and revealed the shift toward a conciliatory tone and
consensus building. "I want to bring all Argentines together, without rancor, without hatred;
hatred is harmful, hatred only destroys."

Beside her was her husband and current president Nestor Kirchner, whose future is the subject of much
national intrigue. On the platform was also the next vice president, Julio Cobos, former governor of
the Province of Mendoza. Cobos once belonged to the now fractured Radical Civic Union (UCR), and joined kirchnerismo (referred
to with the letter "K" for short) through the new ruling coalition: Concertación
Plural.

A large part of Fernández de Kirchner’s success was due to her ample victory in the crucial
province of Buenos Aires. With more than 10 million voters, the province represents 37% of the country’s
electorate. There, the current vice president, Daniel Scioli, was anointed governor with more than
48% of the vote, a higher margin than that obtained by the first lady not only at the national level
but in the same province. This demonstrates the personal influence that the former powerboat racer
wields in negotiations with the national executive and poses several questions regarding his political
future. Scioli has emerged as a star of the Generation K of 20 to 40-year-olds, and there is
speculation that he could become the leader of the most orthodox and traditional current of Peronism.
Despite having political origins in the neoliberal decade of the 90s under then-President Carlos Menem
(1989-1999), these days Scioli has managed to skillfully build an image of a down-to-earth and humble
politician, which he ratified with his call to the opposition to "help him govern."

The FPV won in every province except the City of Buenos Aires (better known as the Federal Capital),
Córdoba, and San Luis. Fernández de Kirchner made a particularly good showing in the
Buenos Aires suburbs, the northwest, the northeast, Mendoza, and Patagonia. But not only that, candidates
running on various types of kirchnerist political platforms swept all eight of the provincial governorship
races. This new hegemony is a mix of Generation K radicals, former followers of Menem, and
pure Ks. Against all odds, it has spread to Gualeguaychú—the center of an ongoing conflict
over the pulp mills in Uruguay—Colón, Concordia, and Santa Cruz, recently the site of strong
demonstrations against the federal government mainly by teachers.

The executive will also have control of the Congress; 49 seats were up for elections and 75 new ones
were added. Not only will the new administration have its own quorum in the Chamber of Deputies (129
are needed and the future government will have 137), but by joining with small allied blocks, it could
make up to 60% of the body. In the Senate, the current government will account for almost two-thirds
of the chamber. Thus, the FPV has left the opposition fragmented and without bargaining power.

Regardless, this overwhelming victory was accompanied by losses in large urban centers, which laid
bare the enormous social-cultural divide in the Argentine vote. With the exception of San Miguel de
Tucumán and Mendoza, Fernández de Kirchner lost the country’s major cities including
Rosario, Córdoba, Mar del Plata, La Plata, Bahía Blanca, and the aforementioned Federal
Capital. This phenomenon, labeled by some as political territoriality, is explained by the gap separating
the middle class in large housing developments, whose demands focus on politics, especially greater
transparency, security, and strong institutions; from the small population centers and poorer sectors,
whose attention is on economic growth and job creation.

At the national level, Elisa Carrió of the newly formed Civic Coalition (CC) placed second—confirming
the surge of women in politics. Accompanied by the Socialist (PS) Ruben Giustiniani, the "formula" coalition
performed well in the large urban centers such as Rosario and the Federal Capital, where the ruling
party was not able to gain a strong foothold. In the governor’s race for the Province of Buenos Aires,
where it was expected that rightwing businessman Francisco de Narvaez would come in second—due to his
investment of millions, his emphasis on insecurity, and support from the Buenos Aires mayor-elect Mauricio
Macri—the CC also made a good showing. Margarita Stolbizer, a radical politician like Carrió,
edged out the entrepreneur, garnering 16.58% of the votes to de Narvaez’s 14.9%.

From here on out, the goal of Carrió will be to translate the 25% of the votes she obtained
into arguments for consolidating her leadership of the opposition. "We are already undisputedly
the second largest political force," she stated while acknowledging the triumph of the ruling
coalition. The CC is the most powerful minority force in the new legislature since in alignment with
the PS it forms a block of 35 seats. While this figure shows that it still lags well behind the FPV,
it also points to the significant growth of this force.

Former economy minister Roberto Lavagna made a lackluster electoral debut, taking third place with
16.88% of the vote. Also a veteran of Peronist politics, Lavagna ran as candidate for the UCR. He acknowledged
his defeat and accepted with resignation from his bunker that there is "no worse battle than that
which is not fought." After reviewing what had been his proposal for the government, he ended
with a lament, "Argentines deserve more." His consolation prize was an unexpected claiming
of 35.22% of the votes in Córdoba, one of the country’s major provinces.

For his part, Alberto Rodriguez Saá, the governor of San Luis and candidate for old-style Peron
politics, came in fourth with 7.7% of the national vote. In his orthodox speech, Rodríguez Saá sought
to collect the scattered remnants of the Partido Justicialista, founded by General Juan Domingo
Perón, that had been fractured with the arrival of the Kirchners and their pluralist coalition.

In fifth place, with 1.6%, came the leftwing filmmaker Fernando "Pino" Solanas, who was
satisfied with "having rallied the troops" and looking toward 2009 and 2011, and for having
beaten the rightwing governor of Neuquén, Jorge Sobisch, in the nationwide ranking.

Overall, elections day proceeded normally. However, the lack of ballots and the lack of poll officials
(85.9% of people summoned as elections officials rejected notifications) generated annoyance, discussions,
considerable delays, and a few unfounded allegations of fraud.

Outlook for the Future

The transition brings up a number of questions, both because it passes the baton from one spouse to
the other and because it takes place in a general climate that ratifies continuity. Nonetheless, Fernández
de Kirchner faces the challenge of responding to a demand for change that she made her campaign slogan.
Now she must clarify what she means by change.

In the social sphere, the challenge consists of translating the 8% sustained growth in the economy
into distributive policies. Even though the next president noted that the fight against poverty and
unemployment would be her priority, it is unclear how much of the current economic model, ultimately
the main pillar of the government in office, will be put in jeopardy to fulfill this goal.

The new president’s proposals for solving the need for more equitable distribution and controlling
inflation (the central issue being discussed today in the country), focus on a wage pact between the
state, employers, and trade unions that allows for a single raise in wages for the whole year and a
gradual increase in prices, combined with the unorthodox recipe of not cooling demand but generating
supply through investments.

This would be accompanied by a possible expansion of loans to the private sector, an increase in taxes
on the agricultural sector—a measure that caused protests which are now diminishing as international
soybean, corn, and wheat prices rise—and, it is rumored, an exchange rate ranging between 3.30-3.35
pesos to improve competitiveness and returns.

Otherwise, there are no signs of change in the government’s reluctance to recover businesses that
were privatized during the 90s, or to curb the transnationalization of key sectors such as oil and
gas, media, food, financial services, mining, and steel.

It also is not yet clear how the energy crisis will be solved, which according to the government was
caused mainly by the cold winter, or how to address the problem of monocultures, and the tragic paradox
that a country that produces food for 300 million people cannot meet the needs of its population of
barely 40 million.

As for partisan politics, it’s anyone’s bet what the emerging political system will look like, having
been shaken to its core by the "crisis of representation" of 2001. Also a mystery is the
form of reorganization planned for the Front for Victory and Peronism in general, a task that seems
to have been assigned to the current president.

Statements so far indicate the government’s desire to transform the classical Peronist/anti-Peronist
divide into a party system with leanings from center-left to center- right, while retaining traces
of the old partisan identities. For this election, however, the fact that Macri did not run allowed
the votes to be characterized, beyond the fragmentation and dispersal of the traditional parties, by
the first dichotomy. This factor benefited both Carrió and the Concertación,
which by their own admission are not focused on right and left categories.

In the event that this reconfiguration takes shape, questions will hinge on the form and content of
the regrouping proposed by the administration. So far, the only indication of what that will look like
is the coalition formed for the elections. It also remains to be seen which of the two major opposition
candidates, Macri or Carrió, gains the upper hand. Macri has been strengthened by the significant
victory of winning the leadership of the capital city government. But the national elections revealed
his political meanness and the costs of those methods, shown in the diminishing number of legislators
loyal to him. Carrió is hoping that Macri will be contained in the Buenos Aires district, but
her own leadership is limited to being a media figure within a political framework whose durability
is a question mark.

Looking to the World

In international affairs, Fernández de Kirchner has shown more willingness to engage in pro-active
foreign policy and expressed her dream that "Argentina make a mark in the world." Apparently
she has explicit intentions to seek outside investment, which could have as a first step rapprochement
with the International Monetary Fund and the Paris Club. To that end and going beyond comparisons,
the Argentine president may be counting on a change in the White House if Democrat Hillary Clinton
takes office, and thus an end to the cold relations between Nestor Kirchner and George Bush.

Fernández de Kirchner further stated that she will maintain the policy of consolidating Argentina’s
position in Latin America. It remains to be seen what the chances are for reconciling with neighboring
Uruguay given the conflict over the Botnia pulp mill on the banks of the river that links the two countries.
However, the new president has pointed to the need to expand Mercosur and build in greater complementary
relations between its members. 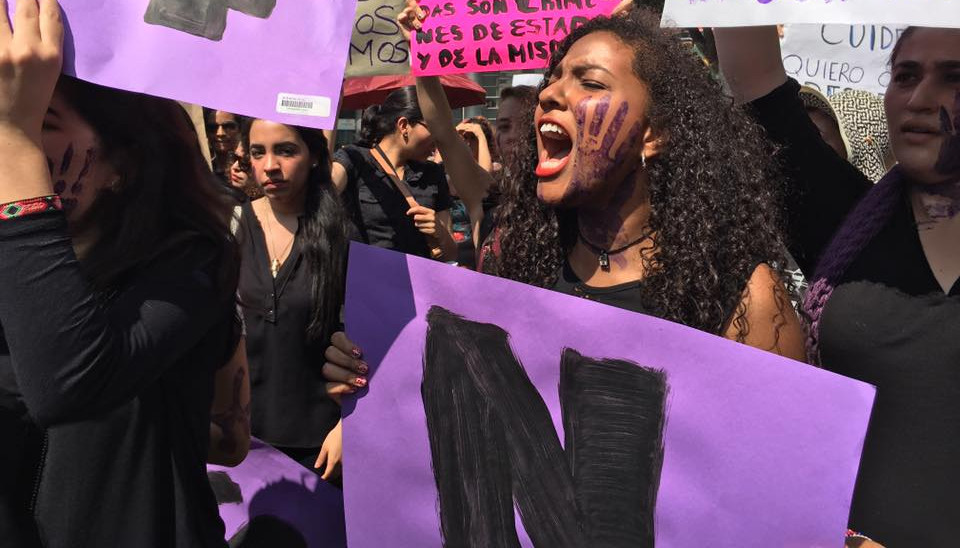 How is gender-based violence in Latin America measured?