Life began to get hard for most Americans beginning in the late 1990s due to increased family debt.
During the same period, life got a lot harder for most Mexicans for the same reason. The same financial
institutions created and profited from much of the family debt in both countries.

While it is popular among U.S. presidential candidates these days to blame Mexican corruption for
our huge undocumented immigrant population, corruption in the United States played a far larger role
in compelling millions of Mexicans to cross our southern border with or without legal authorization.
U.S. corruption came in the form of politicians implementing and enforcing foreign policies that yielded
unprecedented profits for their well-heeled campaign contributors in the financial services industry.
They probably didn’t break U.S. law to accomplish this, but they did force Mexico to break its own laws
to implement their program.

Led by Wall Street heavies Bank of America, Goldman Sachs, Citi, Fidelity, Chase, and others, these
finance industry leaders got Congress to permit financial institutions to increase family debt in the
United States by enacting legislation friendly to mega-banks (financial holding companies) while thwarting
consumer-friendly legislation. The same U.S.-based financial services leaders played a leading role in
increasing family debt to unmanageable levels in Mexico in the mid to late 1990s through their influence
of the U.S. Congress.

Creating Hardship in the U.S.A.

In the mid 90s, the U.S. financial services industry concentrated campaign contributions to New York
Congressman Peter King, currently the ranking Republican on the House Homeland Security Committee and
adviser to the Giuliani campaign, and to other new majority Republican leaders on the House and Senate
Banking Committees.1

These committees crafted successful legislation that enabled U.S.-based banking and finance giants,
Bank of America, Citi Corp, Fidelity, Chase and a few others to acquire real estate, insurance, credit
card, brokerage companies, and other banks as well.2 They also passed
legislation that opened the way for banks to triple the charges on their customers’ accounts and to raise
interest rates on credit card balances without fear of legal limits on interest rate increases they could
impose.3

Although Democrats Maxine Waters and Charles Schumer tried to curb banks from surreptitiously abusing
customers through ATM use charges and other account fees, the Republican majority on a banking Congressional
subcommittee killed their efforts. As a result, banks nationwide gained the go ahead to double charge
customers for using each other’s ATMs and to increase fees.5

Profiting From Hardship in Mexico

On Dec. 22, 1994 the Mexican peso was devalued over 40%. This, coupled with an increase in the U.S.
prime rate enacted by the U.S. Federal Reserve, rendered Mexico nearly bankrupt largely due to dollar-denominated
bond debt to Wall Street banks.8

The U.S. government got the International Monetary Fund and Canada to give Mexico money to put together
a bailout package to pay its creditors, most of which were Wall Street banks. The International
Monetary Fund contracted Mexico’s bailout loan to the U.S. Treasury Department.9 Acting in the interest of Wall Street creditors, Peter King got Congress to adopt legislation that imposed monthly oversight
on the bailout implementation by the Banking Committee.10

To get the bailout money, Mexico was required to meet stipulations that violated its own Constitution,
which limited foreign ownership of the banking industry to 5% and forbade home mortgage interest rates
above 7%.11 The bailout package required that foreign banks get
49% of the banking market. Limits on interest rates for all loans were eliminated to pay off Citi, Chase
Manhattan, Bank of America, JP Morgan, and the other foreign bond investors. Another stipulation on the
bailout money required Mexico to put a cap on wages nationwide.12

Although it was a major Mexican bond creditor, JP Morgan became Mexico’s financial adviser.13 An
arrangement like this in the United States would have been seen as a blatantly illegal conflict of interest.

Mexico’s national bank was forced to raise the money to pay off the inflated bond debts to the foreign
bond investors by dramatically increasing interest rates on the full spectrum of loans in Mexico.

The impact of 1995 loan interest rate increases was more than millions of people and thousands of
businesses could handle. Thousands of farms and businesses, both large and small, went bankrupt. In 1995
alone over 12,000 of Mexico’s businesses filed for bankruptcy, and as economic activity came to a standstill
and demand was cut, orders were canceled and plants operated at less than minimum levels. Idle capacity
in many branches of the manufacturing sector increased to 70%.16 It
became impossible for millions of workers to support their families by earning paychecks in their own
country. Unable to earn enough to support their families, millions of workers migrated to the United
States to find family wage work.17

The Wall Street banks profited handsomely. In 1998 for example, after recouping and profiting from
their short-term bond investments through direct and enabled payments from the bailout package, JP Morgan
and Citi owned over $4.1 billion dollars and $1.9 billion dollars respectively worth of loans in Mexico.
A few years later Citi became the owner of 23.2% of the Mexican loan market through its acquisition of
Banamex.18 The banking and finance sector rewarded the Republican
members of the banking committees in Congress with millions of dollars in campaign contributions.19

Juanita and Pablo, A Family Story20

Pablo and Juanita lived in a town in northern Mexico where they grew up and got married. They had
two children. In 1993 they owned a house and two parcels of vacant land that they planned to give to
their children to build their own homes on.

Pablo had a good job and 25 years seniority in a large successful company. Taking a cue from many
friends and family who had enjoyed Juanita’s cooking at social gatherings over the years, Pablo and Juanita
decided to open a restaurant to bring in more income to finance sending their children to college. In
1994 they got a $100,000 peso (US$10,000) loan from a local bank to start Juanita’s restaurant.

The restaurant was very successful. The food was excellent, which along with Juanita’s warm personality,
attracted a large crowd of happy regulars.

Although Pablo and Juanita made all their payments on time, their debt on the loan quadrupled in 1995
because of Mexico’s new increased interest rates. The bank quintupled their monthly payment in 1996.
Life was hard. But with all four members of the family working, they persevered. The final straw came
in 1998 when Pablo’s company downsized and he was forced into retirement. The family was now in danger
of total financial ruin.

Organizations and friends rallied to their aid and raised enough money through donations to save the
house in 2000. But the bank took their land and Juanita’s restaurant.

So Juanita came to the United States where she works as a domestic worker without documents. She works
16 hours a day, six days a week taking care of a wealthy old woman for $250 a week. Juanita knows she
is working at well below minimum wage, but she doesn’t want to assert her right to minimum wage for fear
of losing the job and being incarcerated and then deported.

Profiting From Hardship on Both Sides of the Border

Today one of the owners of the bank where Pablo and Juanita got their loan for the restaurant is Bank
of America, which acquired 24.9% of Serfin, Mexico’s third largest bank.21 Their
son’s student loan is owned by Citi, which acquired Mexico’s largest bank, Banamex.22 The
trend begun by the Mexican bond bailout implemented by the U.S. government at the behest of huge financial
holding companies has led to a Mexico today in which over 80% of the banking market is owned by foreign
banks and there is only one domestically owned nationwide bank.23 Profits
from money wired home from family members who went to the United States to work is shifting to some of
the same financial institutions that caused so many to flee the country in search of decent paying jobs.24

Although credit cards bear the logo of Visa, MasterCard, or one of the other networks, they are actually
issued by banks. The five leading U.S. bank credit card issuers are Bank of America, JP Morgan Chase,
Citigroup, Capital One, and HSBC Bank.25 Four of these mega-banks
collected billions of dollars in loan payments through Mexican banks they acquired between 1995 and 1998.26

JP Morgan Chase, which recently owned the largest chunk of the credit card market in the Untied States,
also now owns the company in Mexico where Pablo worked for 25 years before he was forced to retire.

Some of the same Wall Street heavies who profited from the Mexico bailout package began investing
in three private prison companies a couple of years ago. This past January, the Bush administration gave
contracts to Cornell, the Geo Group, and Corrections Corporation of America to build and run prisons
for immigrants detained by the Immigration and Customs Enforcement (ICE) arm or the Homeland Security
Department.27

The market for private prison companies mushroomed when the Bush administration changed the charge
for being picked up without your own Social Security number from a misdemeanor carrying a maximum of
one year in jail to a Class B felony carrying a minimum of three years in prison.29

While all three financial services industry leaders have profited handsomely on their private prisons
stock in the wake of subsequent immigration raids, incarcerations, and deportations,30 the
human impact has been devastating for many.

At a time in which a Google search for "reporting illegal immigrants" yields 1,760,000 results,
ICE agents from New York’s Long Island to Portland, Oregon have seized Latinos from bus stops, light
rail platforms, and even their homes with no more probable cause than their looks.31

The seized disappear without access to legal counsel and without the opportunity to contact family
and friends. These unfortunate people who happened to be in the vicinity of ICE agents at the wrong time
are incarcerated with dangerous criminals, and, if unable to prove legal status on the spot, are forced
to sign away their legal rights and then deported. In the meantime, spouses, children, school teachers,
and childcare providers are left to search for a parent who has disappeared without a trace.32

As these raids continue, facts and rumors spread a chilling fear through Latino communities across
the country. This is occurring much to the ignorance of the general public.

As can be expected, the major media has turned much of its attention to the people who are or would
be president of the United States. The single largest financial source of the campaigns for five of the
six frontrunners for president in the two major parties is the financial services industry.33

This is a fact that the U.S. major media has missed or ignored, much in the same way it has ignored
the role that the financial services industry is and has been playing in the issues surrounding immigration. 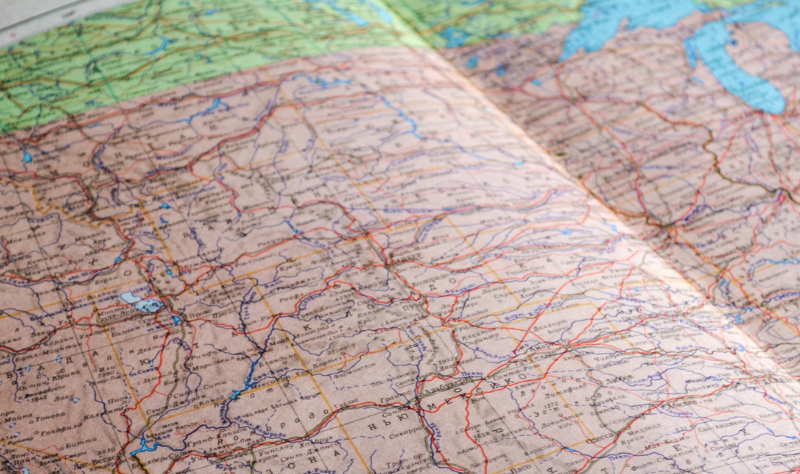 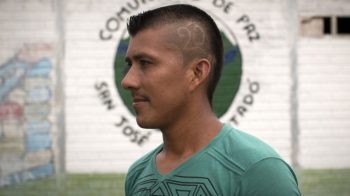