You had to duck to miss the food issues flying through the global cafeteria this week. The problem
this time is not so much the quantity of food produced (if it ever was), but what productive land will
be used for, who will feed us, and who will eat. The economic power of agribusiness has grown so much
in recent years, that government or civil society attempts to assure food supply meet with potentially
destabilizing resistance. Unless these governments hold fast to their right to regulate supply, these
food fights could develop into all-out war.

The energy integration of the region could be a decisive mechanism for a better geopolitical position
in the international arena. To achieve that goal, it is fundamental to construct an adequate infrastructure,
and to have an institutional scheme to regulate the way in which said infrastructure will operate. To
be precise, the design of the technical as well as institutional mechanisms for the development of a
common energy market is still a challenge to fulfilling the region’s prevailing political will.

Ariela Ruiz Caro (arielaruizcaro(a)gmail.com) is a Peruvian economist, formerly an official with
the Andean Community. Currently she is a consultant for CEPAL (Economic Commission for Latin America
and the Caribbean) and for the Presidency of the Commission of Permanent Representatives of MERCOSUR,
and a columnist from the Andean region for the CIP Americas Policy Program at www.americaspolicy.org.

Expansion of Biotechnology in Brazil Brings Violence
By Isabella Kenfield

On March 7 several hundred people occupied a research site of the U.S.-based agricultural biotechnology
giant Monsanto in the state of São Paulo, Brazil, and destroyed the greenhouse and experimental
plots of genetically-modified (GM) corn. Participants in the act, members of the international farmers
organizations La Vía Campesina, stated that the act was to protest the Brazilian government’s
decision in February to legalize Monsanto’s GM Guardian® corn, which was recently banned in
France, Austria, and Hungary due to risks to the environment and human health.

Isabella Kenfield is an analyst with the CIP Americas Program www.americaspolicy.org.
She is currently an associate at the Center for the Study of the Americas (CENSA) in Berkeley, California
and consultant with Food First / Institute for Food & Development Policy in Oakland.

Presidential Candidates on Trade
By the Americas Policy Program

There is little difference between Democratic presidential candidates Hillary Rodham Clinton and Barack
Obama on international trade issues, although neither has provided much detail and both have shown some
ambivalence in their views.

McCain’s central argument is that free trade is the goal, it’s working well,
and we just need to work towards making it “freer.”

The Americas Policy Program is found at www.americaspolicy.org. This information was compiled with help from Johan Kharabi.

Where the Asphalt Ends: Bogota’s Periferies
By Raúl Zibechi

At the southern end of Bogota, Colombia, in the cold, wind-eroded mountains, millions of people displaced
by 60 years of war try to build the world of their dreams despite threats from armed groups and abuse
from landowners.

Learn how one community survives and thrives one hour from the center of Bogota amid the immense suburb
Ciudad Bolivar, at one million strong the most populated of the city’s 20 “localities.”

Raúl Zibechi is an international analyst for Brecha, a weekly journal in
Montevideo, Uruguay, professor and researcher on social movements at the Multiversidad Franciscana de
América Latina, and adviser to social groups. He is a monthly contributor to the Americas
Policy Program (www.americaspolicy.org).

The election climate in Paraguay grows tense with the possible defeat of the Red Party that has been
in power for more than half a century. The U.S. ambassador’s interference in the electoral campaign and
a yellow fever epidemic are keeping tensions high.

I appreciate having your detailed reports. I closely follow Latin American affairs and in particular support the movement toward equality for indigenous peoples of Latin American countries. I support the desire to rid Latin America of U.S.A. intervention and believe these free trade agreements are unsustainable in the context of environmental impact they will have, for example the Plan Puebla Panama, which are driven to serve the interests of the minority rich elite. 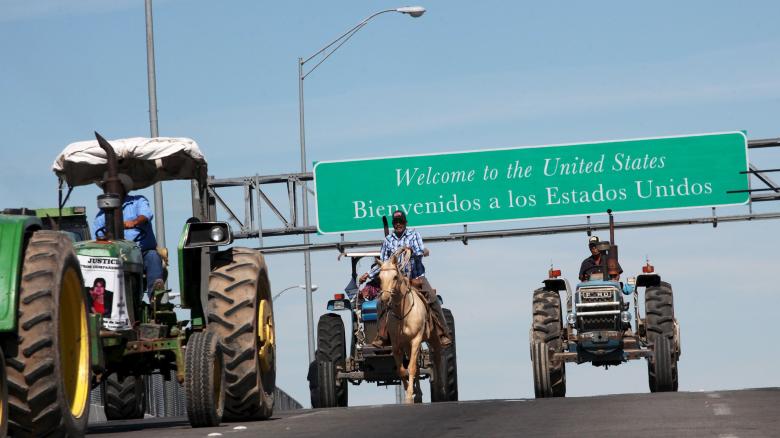 The Occupation of the Bridge of the Americas