Fiction: In the film No Country for Old Men (Cohen Brothers, 2007), evil, as represented by Javier Bardem’s excellently portrayed drug trafficker-paid hitman, moves implacably through the Chihuahua desert’s dusty Texan towns, injuring, killing, destroying, getting what he wants. Good, personified by Tommy Lee Jones’ also excellent tired old Sheriff, is impotent against the triumphant march of evil, which he watches, resigned, on the verge of his retirement.

The reality: Holy Week, 2008. Paloma de Villa, with less than 2,000 inhabitants, set in the Chihuahua desert on the border with Columbus, New Mexico. The police commandant and six officers, between them making up the entire municipal police force, resign. They hand in their notice because of the wave of drug-related killings and kidnappings and they exile themselves on the U.S. side of the border. In just 81 days, from Jan. 1 to March 21, organized crime has beaten all records for killings in the state of Chihuahua: 175 people murdered plus 40 corpses found in a Ciudad Juarez mass grave ups the macabre homicide figure to 215 for the year. In March alone, 107 people have been killed in this border town.

The law is impotent against the advance of evil.

Just under a week later, on March 27, the secretaries of governance and national defense, the attorney general of the Republic, and the state governor announced "Operation Chihuahua," sent to address the terrorized population of Ciudad Juarez. This operative’s purpose is "localizing, combating, and dismantling the networks of drug trafficking, organized crime, and money laundering." They made it known that in a matter of hours, more than 2,000 Mexican Army soldiers and more than 400 federal police officers would be arriving at the border town to collaborate with the state and municipal police in a joint action against organized crime.

Ciudad Juarez was practically in a state of siege: joint police and army convoys with armed vehicles and tanks covered and stationed themselves in different parts of the city; seizures of arms, drugs, and traffickers were announced. However, not one of these important gangsters was detained. The townspeople, exhausted by the daily horror, by the explosion in violent crime, robberies, attacks, kidnappings, and rapes, welcomed the military with gratitude.

However, the military presence soon provided the first casualties—human rights. Not a week had passed since the beginning of the operation when the army detained 18 elements of the state police. They were from the police investigation corps, among them four policewomen, including the one in command of the operation. The detainees were driven to the military camp where they were kept for nearly two days as "resguardos," a judicially non-existent category. Three of the women were stripped in front of the men, blindfolded, and threatened.

The army claimed that the state police had been found with drugs. The detainees’ families claimed that it was planted by the military. The national network Todos los Derechos para Todos (All Rights for Everyone) condemned the acts in a complaint to the North American non-profit Proderecho, which just a few months ago had trained the four policewomen in the new penal justice system. Likewise, there was a complaint from the National Human Rights Commission. Social pressure and a lack of officers led to the 18 state police being freed by Thursday April 4.

Although there had been petitions, most of all from the National Action Party (PAN), for the operation to be extended to the whole state, there were many voices openly opposed to militarization. The main reason was that the presence of the army had brought with it multiple human rights violations: three weeks after the start of the operation, the state’s Human Rights Commission already had 37 complaints of military abuses on file.

One of the "side effects" of the Chihuahua operative has been without doubt the persecution of the leaders of social organizations. On March 14, shortly before the operation started, the leader of the rural organization Aerodinamica Nacional was assassinated in Nuevo Casas Grandes. A commando intercepted Armando Villarreal Martha’s vehicle and shot him with several machine gun loads. Villarreal was a national leader of the agricultural producers’ struggle for just tariffs on electrical energy for agricultural irrigation. He had also criticized the privatization of the national fertilizer production infrastructure.

As the operative began two weeks later, four smallholders from Villa Aldama, members of Agrodinamica Nacional, were apprehended by officers of the Mexican Federal Bureau of Investigation (AFI). They were accused of the crime of "electricity theft" and set free with warnings a day later, after their organization took over the Federal Electricity Commission offices in the state capital.

On Thursday April 3, one week later, it was Cipriana Jurado Herrera’s turn, a social activist and adviser to families affected by the killings of women in the border area. On the way back from taking a mother to identify her daughter’s remains in the Medical Forensic Service, she was detained violently and without a warrant by AFI officers at the border. The accusation against her: "attacking general communication pathways." The reason: a protest on a bridge on Oct. 12 … 2005.

The next day, in Nuevo Casas Grandes, the peasant leader Carlos Chavez Quevedo, co-founder of Agrodinamica Nacional alongside Armando Villareal Martha, was apprehended in the same way and taken to Ciudad Juarez. The accusation is the same, based on the same act. Thanks only to the intense criticism and protest by social organizations, especially women, was Cipriana let free with a warning on Friday the fourth at four in the afternoon and Chavez at 11 at night on the same day. However, according to declarations from the attorney general in Ciudad Juarez, there are outstanding apprehension orders for 40 more Chihuahua social leaders who have participated in roadblocks or the taking of bridges.

The federal government’s intention behind this wave of criminalization of the Chihuahua people’s attempts at social movements and struggles can be read in just one of two ways.

Firstly, it is an attempt at threatening the leaders of three movements that have been at the forefront on a national level: the countryside producers’ movement to get electricity at competitive prices and renegotiate NAFTA’s agricultural terms; the women’s movement against femicides; and the movement of indebted people against the banks and mortgage companies.

Secondly, the Calderon administration’s criminalization of social protest hides the intention of sending a strong warning to the groups that prepare civil resistance actions against law initiatives for any kind of privatization of Petroleos Mexicanos (PEMEX). The regime will tolerate no protest, even if it is peaceful, even if it is lead by women.

Operation Chihuahua, begun by the federal government with the collaboration or submission of the Chihuahua State Government, does not constitute an efficient action for combating organized crime or for instituting the rule of law in that part of northern Mexico. Few analysts believe that the army is waging a serious combat against all the drug cartels and organized crime. On the contrary, some think that the federal forces have come to reinstall the dominion of a certain cartel in Juarez: either it’s about displacing the Carrillo Fuentes Cartel and replacing it with Chapo Guzmán’s or repositioning the leader of Carrillo Fuentes because of a rebellious local manager.

What is known for sure is that the federal and state governments’ resorting to the army is all they can do after at least 15 years of having tolerated and protected the implantation, growth, and criminal diversification of organized crime along the border of the whole state, having allowed its infiltration and the control of entire police details on the federal, state, and municipal levels.

The criminalization of social protest, persecution of social leaders, and simultaneously, the impossibility of combating drug cartels with an honest, professional, and effective police and having to resort to the army, shows in depth the great weakness of the Mexican state, epitomized by some as "too strong with the weak; too weak with the strong."

Idle No More: What do we want and where are we headed? 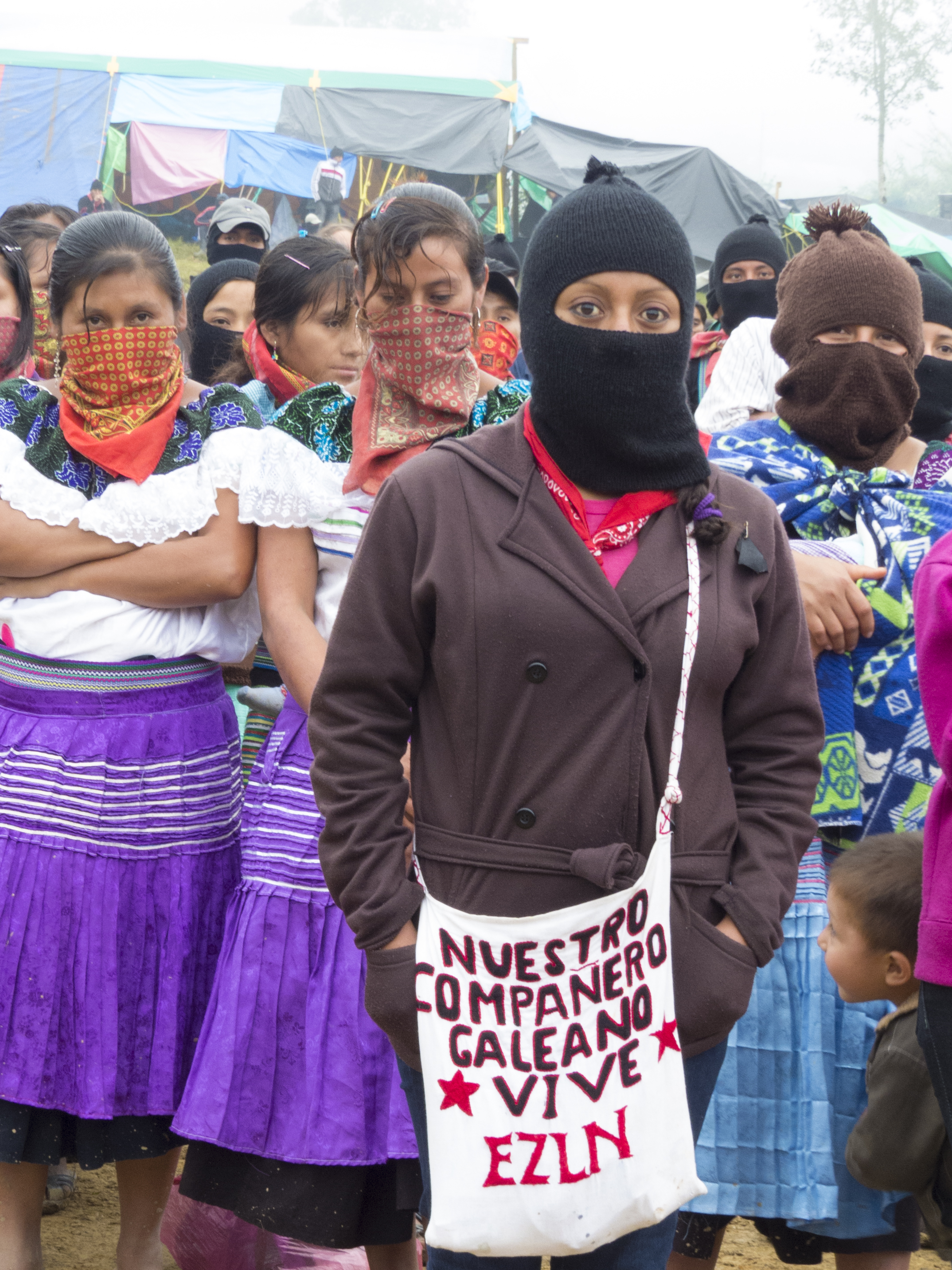