The immigration crackdown is filling county jails across the country with immigrants who have been torn away from their jobs and homes. Tens of thousands of arrested immigrants are bedding down in county jails while they await court dates and eventual deportation.

As the immigration crackdown escalates, county commissions and sheriff departments are increasingly signing contracts with the federal government to house arrested immigrants. For the most part, county governments are eager to receive immigrants into their jails.

The per diem payments they receive from two federal agencies—Immigration and Customs Enforcement (ICE) and U.S. Marshals Service (USMS)—are covering shortfalls in county budgets, funding the hiring of new deputies, and paying for jail expansion projects. Although some localities are complaining of jail overcrowding and a diffusion of law enforcement priorities, more and more local governments are cashing in on the immigration crackdown.

ICE is the agency of the Department of Homeland Security (DHS) responsible for the "detention and removal" of unauthorized immigrants. USMS is the Justice Department agency that transports federal prisoners, including arrested immigrants. Both agencies offer per diem payments—generally much higher than those provided by local law-enforcement organizations—to governments and private companies that house immigrants.

Despite this increase, ICE is still hard pressed to find beds for the increasing number of immigrants that the agency has detained. Responding to the pressure of immigration restrictionists, the Bush administration and Congress are committed to increasing bed space for detained immigrants. The Intelligence Reform Bill of 2004 contained the authorization for expansion to 40,000 beds by 2010, and the president’s 2009 budget includes funding for 1,000 more beds, most of which will likely be contracted out.

However, as ICE increases "interior enforcement," the agency is arresting large numbers of immigrants in areas of the country far removed from its 15 detention centers. The recent ICE raid on the Agriprocessors Inc. meat-processing plant, described by the U.S. attorney in Iowa as the "largest criminal worksite enforcement operation ever in the United States," sent more than 300 immigrants to county jails scattered around Iowa or to the state prison. Most have pled guilty to document fraud and have been sentenced to as many as five months in jail.

The raid on Agriprocessors Inc. illustrates another factor leading to increased immigrant detention in local jails and prisons. Rather than simply detaining and deporting unauthorized immigrants, ICE is now often charging immigrants with crimes. In the Agriprocessors case, arrest warrants were issued for 697 workers for such crimes as "aggravated identity theft," using a fraudulent Social Security number, illegally reentering the country after having been deported, and fraudulently using an alien registration card.

Over the past several years, ICE has encouraged local governments not only to help with detention but also to enforce immigration law. Under ICE’s 287(g) agreements and the cooperation of its newly created Law Enforcement Support Center, ICE is training and deputizing local police as well as providing funds for police officers and deputies. Although the 1996 immigration reform law authorized the program, it wasn’t launched until after 2001. In the last couple of years, the 287(g) agreements have become "one of the hottest ideas for local and state officials to deal with immigration."

The 287(g) program is rapidly gaining new state and local partners, expanding from only eight partners at the start of 2007 to 47 currently, with 90 state and local police forces on a waiting list to sign agreements with ICE. According to ICE, since 2006 more than 50,000 immigrants have been deported or are scheduled for deportation as a result of the 287(g) program. While many local police and sheriff departments, particularly in rural areas, have eagerly joined the immigration crackdown, other police chiefs, backed by local governments, have refused to enforce immigration law, saying that it distracts from their crime prevention responsibilities.

Most immigrants arrested and detained by local police are not criminals but migrant workers who lack the proper papers to live and work in the United States. But ICE describes the new local-federal cooperation as more of a national security program than enforcement of immigration laws.

"Terrorism and criminal activity are most effectively combated through a multi-agency/multi-authority approach," says ICE in its description of its new collaborative agreements with local law enforcement agencies. "State and local law enforcement play a critical role in protecting our homeland because they are often the first responders on the scene when there is an incident or attack against the United States. During the course of daily duties, they will often encounter foreign-born criminals and immigration violators who pose a threat to national security or public safety."

Critics of the increasing involvement of local law enforcement forces in immigration arrests and detention are concerned that this will lead to racial profiling, discourage immigrants from cooperating with local police, divide communities, and distract police and sheriff deputies from more pressing public safety concerns. Pressure from immigration restrictionists, who contend that illegal immigrants represent a real threat to the public safety and welfare, often manage to push these arguments aside in public debate.

In the end, financial considerations weigh heavily for cash-strapped county commissions and sheriff departments. As Sheriff Roger Mulch told Jefferson County (Illinois) commissioners in late February, "ICE, during the last three months, has been hot to do business with us." Each locality negotiates independently with ICE and USMS to set the per diem rates, and as the demand from the feds for local jail beds increases county sheriff departments are negotiating ever-higher rates.

In North Carolina, Sheriff Terry Johnson recently succeeded in persuading the Alamance County Commission to agree to ICE’s request to make the county a hub for immigration enforcement and detention, arguing the financial benefits of immigration detention. He noted that the county will likely earn $5.5-6 million in 2008 from ICE and USMS detention contracts. In February alone, the county took in $400,000 in "bed rentals." To make more room for immigrants, the sheriff recommended that the county purchase inexpensive modular units to install at the jail’s annex.

In Arkansas, Washington County Sheriff Tim Helder explained to the county commission that housing federal prisoners in the county jail has kept the jail’s budget in the black. "When I can get more money to hold someone’s prisoners, and we have the room, why wouldn’t I do that?" Helder said. "To me it just makes sense." Not just money, but more money than what the state or other localities pay for using the jail. ICE and USMS pay $48 a day, while the county only charges local law enforcement agencies a nominal $10 booking fee. "We pay pretty well," said a USMS officer.

Sheriff Helder says that federal prisoners can be placed in the jail alongside any other class of inmate. "What makes it attractive to us is that we can plug them into all these holes we have," he said. Funds from ICE and USMS have allowed the county to cover the budget shortfall in Washington County, Arkansas for the corrections center built in 2005, and will allow the county to expand the jail in the next two years to accommodate the exploding jail population.

In Virginia, ICE says that it favors the Arlington County jail because of its proximity to federal offices and courts. The average stay for the 82 inmates in the jail in April was 52.56 days, with some immigrants racking up 260 days. "It’s [the federal money] just helping to offset our costs that we’re going to have anyway," Maj. Susie Doyel of the county sheriff’s department said. "I think it’s definitely advantageous to the county." The county collects a $91 per diem from the USMS and ICE—much higher than the $8 the county receives from the state for housing local inmates each day.

A prominent critic of current immigrant detention practices, Judy Greene of Justice Strategies, worries that the ICE has created a national market for prison bed contracts. She says that this market "h as penetrated the public sector with notions that expanding capacity of local lockups will generate ‘profit’ for the public purse."

Clearly the federal government has failed to create a sustainable immigration system. But involving local governments and police in immigration law enforcement and detention is not a solution. It just extends this failure to new levels of government. 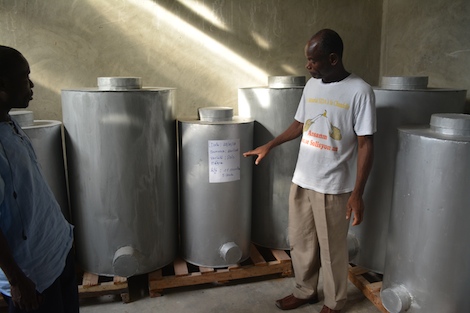