Immigrants are behind one of America’s fastest growing, most profitable industries. That shouldn’t come as a surprise. Immigrants have always been a core factor in U.S. economic development.

Mining, railroads, agribusiness, and, recently, construction have been among the many U.S. industries that historically been driven by an abundant supply of immigrants. But now, when the economy is imploding, most industries are shedding immigrants. The private prison industry, however, is booming, largely because of the ever-increasing supply of immigrants supplied by the federal government.

In the past, when the government detained immigrants—legal or illegal—they were placed in one of a handful of official processing centers where they awaited a hearing or deportation. The Department of Homeland Security still runs seven immigrant detention centers.

Since the early 1980s, sparked by the Reagan administration’s new enthusiasm for privatization and the free market, the Justice Department and now also DHS have been outsourcing most of the immigrant detainees to private firms that own or manage scores of prisons that annually hold hundreds of thousands of immigrants.

At a time when most other industries are reporting slackening consumer demand and plunging revenues, the executives of the major private companies providing prison services attribute their fortunes to the sorry fate of America’s immigrant population. They routinely tell investors that their major "customers"—Federal Bureau of Prisons, U.S. Marshals Service, and Immigration and Customs Enforcement (ICE)—keep "bed occupancy" near capacity.

To understand how well the prison business is faring and how immigrants are key to prison profits, you can listen in on the prison firms’ quarterly conference calls with major Wall Street investment firms. In early November, the country’s prison corporations reported soaring profits.

Corrections Corporation of America (CCA), the country’s oldest and largest prison corporation, boasted that it enjoyed a $33.6 million increase in the third quarter over last year, while earnings rose 15% during the same period. Formerly known as Wackenhut, GEO Group, the nation’s second largest prison company, saw its earnings jump 29% over 2007. Another private prison firm that imprisons immigrants is Cornell Companies, and it reported a 9% increase in net revenues in the third quarter.

Private prisons have been booming over the past eight years. From 2000 to 2005, the number of private prisons increased from 16% of all prisons to 23%. All of the increase in federal prisons has been in prisons owned or operated by private firms.

Immigrants are the fastest growing sector of the federal detainees and prisoners, and there are hundreds of millions of dollars to be made by enterprising businesses and governments. The annual ICE budget for "detention and removal" is $1.2 billion.

In addition, the Justice Department’s Office for the Detention Trustee has hundreds of contracts with local governments and private prison firms that provide beds for immigrants. Both ICE and OFDT have special offices that oversee the outsourcing of its immigrant prisoners. OFDT even boasts of its "enterprise" system of detention.

Private prison companies aren’t worried that the Democratic Party sweep will mean that fewer immigrants are sent their way because of party promises of enacting comprehensive immigration reform. GEO Group’s chairman George Zoley assured investors on Nov. 3: "These federal initiatives to target, detain, and deport criminal aliens throughout the country will continue to drive the need for immigration detention beds over the next several years and these initiatives have been fully funded by Congress on a bipartisan basis."

Not only has the DHS crackdown on illegal immigrants have bipartisan support in Congress, it was the Democratic Congress, say private prison chiefs, that increased the 2009 budget for the crackdown. "The president only asked for a program funding of $800 million," noted Zoley. "It was the Democratic chairman [of the Homeland Security subcommittee] … that added another $200 million to this program."

In a post-election conference to report third-quarter revenue increases, CCA board chairman John Ferguson told Wall Street investors: "One budget that was put in place for the full year was immigration customs enforcement … and the funding for that is for 33,400 beds—that’s an increase from 32,000 in the prior fiscal year, and also that compares to a little over 31,000 detainees in [2007]."

"Just to remind everyone," Ferguson told investors, "detainee beds would be sourced from us from several places that immigration customs boys need: that’s border apprehensions, people that overstay their visas, [immigrants] that are identified as criminals, and the jails and prisons [that hold immigrants] who have completed their time and will be deported."

Addressing investor fears that recent decreases in illegal immigration inflows might dampen company returns, Ferguson said, "So even though we have seen the border crossings and apprehensions decline in the last couple of years, we are really talking about dealing with a population well north of 12 million illegal immigrants residing in the United States."

The CCA chief assured investors that the company’s dependence on detained immigrants is not a factor of policy but rather of law enforcement. "The Federal Bureau of Prisons, U.S. Marshals Services, Immigration, and Customs Enforcement are carrying out statutory obligations for their responsibility … We should continue to see their utilization of the private sector to meet their statutory obligations and requirements."

The prison executives even intimate that the economic crisis will fatten their business. When asked by an investment company representative about a possible downturn in detained immigrants as a result of new government policies, James Hyman, president of Cornell Companies, said, "We do not believe we will see a decline in the need for detention beds particularly in an economy with rising unemployment among American workers."

What is more, he told investors that there exists a pool of "10 million plus illegal immigrants" the company draws from and there is an "imbalance" between the number of immigrants and number of available prison beds.

Cornell also waxed enthusiastic about the continued good prospects for its prison business based on immigrant numbers and federal commitment to enforcement and "prison beds." Hyman said, "Today, ICE has about 33,000 detention beds available, which seems small but has increased substantially from only 20,000 beds in 2005. The Federal Bureau of Prisons, which houses criminal aliens and today has about 52,000 beds in their system, including 22,000 inmates housed in the private prisons."

To illustrate the increase in business generated by immigrants, Hyman pointed out that the "Southwest Border Districts for the USMS [U.S. Marshals Service] have about 19,000 detainees today, which is over a 70% increase since the beginning of the decade"—driven by the immigration crackdown including almost doubling of the number of Border Patrol agents.

But won’t the economic downturn mean decreased state and local budgets for incarceration? None of the private prison firms seem too worried.

CCA’s Chief Financial Officer Todd Mullenger offered investors a rosy forecast. "The other thing that could be on the positive side," he said, "[is that] we could see some new states or existing states come to us with a more aggressive push toward privatization to help them reduce their budget shortfall." Moreover, "they might be willing to shutter some old inefficient facilities … and outsource those inmates as a cost-cutting mechanism."

"Remember we’re in two markets—the state market and the federal market," noted Zoley of GEO Group. "At the state level you’re obviously hearing about states with different deficits all around the country including the Sunbelt states where our customers are primarily located. But from coast to coast we’re seeing the continued need for more capacity. Florida itself has a budget deficit I think of $3 billion or $4 billion, and yet in the last month it just issued an award to us for a new 2,000-bed facility."

Full of confidence that the private prison industry is the business to be in these days, Zoley confidently added: "The federal market is being driven for the most part as we’ve been discussing by the need for criminal alien detention beds. That’s being consistently funded." 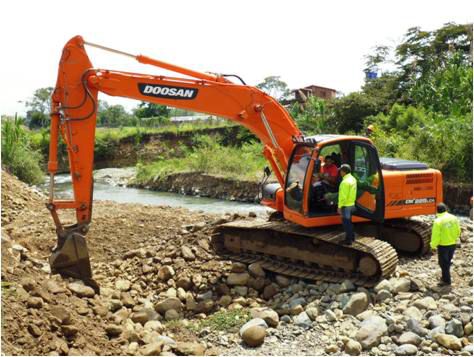 Mining and Post-conflict in Colombia