The courtesy call between President-elect Barack Obama and Mexican President Felipe Calderon turned out to be a little more revealing than anticipated. The statement from incoming White House Press Secretary Robert Gibbs gave a pretty clear, if vague, picture of where Obama plans to take the bilateral relationship. On renegotiating NAFTA, he stood his ground as Calderon lobbied heavily not to re-open the North American Free Trade Agreement.

Laura Carlsen (lcarlsen(at)ciponline.org) is director of the Americas Program (www.americaspolicy.org) in Mexico City, where she has been a writer and analyst for more than two decades.

WTO: Staying the Course in the Face of Mistakes
By Umberto Mazzei

The government of the United States chose 20 countries (G20) to discuss common policies in the face of the financial crisis in Washington—a crisis that grew out of the incestuous relationship between the U.S. government and Wall Street banks. The declaration from the meeting gives a brief nod to financial supervision and recommends more of the same mistakes that brought about the crisis. Better said, “the crises” since there are various crises at once, the most important being the breakdown of the fraudulent financial sector and weakened consumption.

Umberto Mazzei is doctor of political science at the University of Florencia. He has lectured on international economic affairs at the Universities of Colombia, Venezuela, and Guatemala. He is director of the Institute of International Economic Relations in Geneva (www.ventanaglobal.info) and member of the Coalición Global in Guatemala. He is an analyst for the Americas Program at www.americaspolicy.org.

Autonomy Under Siege, this series of reports on the five Zapatista autonomous centers, or caracoles, by Gloria Muñoz Ramírez was first published in Spanish as a special section of the Mexican national newspaper La Jornada, Sept. 19, 2004, following a series of on-site reports by the author. On the 15th anniversary of the Zapatista uprising, the Americas Program is pleased to present readers with the only full authorized translation to English, by Americas Program director Laura Carlsen.

There are many lessons to be learned from the nitty-gritty experiences of grassroots democracy and development from the ground up that are going on in these communities. As they face increasing hostilities from government armed forces and paramilitary groups, we will continue to cover their efforts in a follow-up series looking specifically at this latest stage of resistance.

When the G7 finance ministers returned home following the Oct. 13 weekend meeting of the International Monetary and Finance Committee, the world’s dailies all led with the same story: substantial gains on world stock markets underpinned by a stoic photo-op of the wizards of national finance on the steps of the U.S. Treasury.

The meeting and market response fueled hope that the “coordinated bailout” had succeeded. Had the ministers eliminated the horrific specter of 1930s-style economic depression? Was financial collapse averted? Had confidence returned to refresh what John Maynard Keynes called the animal spirits of capitalism? Maybe not.

Tony Phillips is a researcher and journalist on trade and multinational finance with an emphasis on dictatorships and the WTO, and a translator and analyst for the Americas Program at www.americaspolicy.org. Much of Tony’s work is published at http://projectallende.org/. 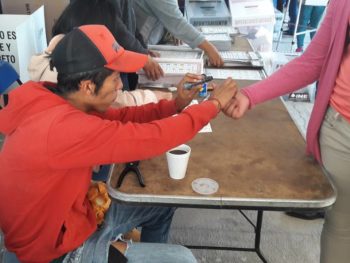 In Mexico, the desire for a real democracy in power