The Sept. 11 terrorist attacks set off the Bush administration’s "Global War on Terrorism" and a Border Patrol hiring frenzy that continues into the Obama administration.

While other sectors are frantically shedding jobs, the homeland-security complex continues its hiring binge. "New Year, New Career" is the slogan of the new hiring campaign by Customs and Border Protection (CBP), an agency of the Department of Homeland Security. CBP hosted job fairs across the country on Jan. 31 as it seeks to hire 11,000 new employees. "Step Up to America’s Frontline" is one of its pitches to recruit 4,600 Border Patrol agents.

Announcing the job fairs that occurred in 15 cities, CBP’s Tara Dunlop said, " We have gone through unprecedented expansion in the last several years. We need additional folks."

America’s frontline is buzzing. While the nation awaits an economic stimulus bill that will help repair the country’s infrastructure of roads, bridges, and ports, the Department of Homeland Security is already flush with funds for new infrastructure.

All manner of "tactical infrastructure" is going up along the border line. Construction workers hurriedly erect the remaining portions of the first phase of the "secure fence." Sensors, lighting towers, and access roads and bridges for the Border Patrol now extend to the most remote stretches of the borderlands. The ports of the nation’s major coastal cities may be deteriorating, but even the smallest and least used ports-of-entry along the southwestern border are being overhauled, expanded, and fortified.

But the bricks-and-mortar projects are a comparatively minor part of the border buildup. The most visible aspects of the border’s homeland security boom are men and their vehicles. Along America’s frontline, they seem omnipresent.

Whether on the major thoroughfares or on the back roads of the borderlands, you can’t miss the green-and-white Broncos, vans, and jeeps of the Border Patrol. These vehicles—two for every three agents—crowd the parking lots of Immigration and Customs Enforcement (ICE) and CBP facilities along the border. At the large ICE processing center in El Paso, the hundreds of parked Border Patrol vehicles force the lawyers and visitors of detained immigrants to find parking on the surrounding streets.

The number of Border Patrol agents has doubled since 2000. More than 6,000 entered the force in the last two years, making it the largest federal law-enforcement agency. More than 18,000 agents are currently patrolling the borderlands, and the Border Patrol has half again as many agents as the FBI, with its 12,000 agents.

Still more agents are on the way. Since Sept. 11 Congress has routinely approved new funding requests for the Border Patrol, including funds to hire 2,000 additional agents by September 2009.

Perhaps nowhere else on the border is the increase in the number of agents as striking as in Ft. Hancock. Border patrol vehicles overflow into the street at the district station along the main street—one of the few that are paved in this dilapidated West Texas town of 1,800 mostly Mexican-American inhabitants about 60 miles from El Paso.

According to BP public information officer Ramiro Cordero, eight years ago there were only a "handful of agents, maybe 20 or 30." Today, the Ft. Hancock station has "more than 200 agents."

At a cost of $19 million, the Department of Homeland Security is building a new district station adjoining the recently constructed Ft. Hancock Port-of-Entry. A narrow bridge, constructed in 1936, connects Ft. Hancock to its Mexican border twin, El Porvenir. On either side of the border are vast reaches of virtually uninhabited and uninhabitable deserts and rugged mountains. The new Border Patrol station will stand out as the largest building along the border for at least 50 miles in either direction.

The newly fortified Ft. Hancock contrasts markedly with the past federal presence in the area. The original Ft. Hancock was an Army outpost in territorial Texas, which like other "forts" in the Texas borderlands was little more than rustic housing for a band of soldiers charged with hunting down insurgent Indians and protecting the railroad and border line. Abandoned in 1895, it wasn’t until the late 1920s that the settlement that had grown up around the fort became host to another armed federal presence. The Border Patrol, founded in 1924, was an outgrowth of an informal border patrol established by the Texas Rangers shortly after the turn of the century.

Border Patrol headquarters were established in El Paso with small outposts along the border. For the first several decades, there was no training and little infrastructure to support the agents who were then known as inspectors. According to one history of the Border Patrol in the El Paso sector: "When they joined the service, they received a badge, a pistol, and oats and hay for their horses, which they had to provide themselves. By the 1950s and 60s, the Border Patrol had established strict requirements for agents and had embarked on a rigid training program."

Four decades later the Border Patrol station at Ft. Hancock remained a small post with only four agents in the 1960s. James Shelby, a retired Immigration Patrol inspector who was stationed at Fort Hancock in the early 1960s, recalled that the first thing he did after his arrival there was to learn every inch of the country.

When tracking illegal border crossers, he could jump ahead because he would already know where the water holes were, and the location of ranch houses that would hire the immigrants or feed them. Recounting a typical day as an inspector in the Ft. Hancock area, Shelby said that a major part of the work was "sign cutting" or finding, understanding, and following the footprints, signs, or tracks of those who had crossed illegally. "We had a four-man station and had to cover 58 miles of river and about 106 miles of ‘drag’ roads," said Shelby. "We cut every inch of them everyday. It was 12 to 16 hour days and it was good work."

Sign cutting remains a skill Border Patrol agents must learn as part of their "line watch" operations. But agents today are less frontiersmen than cops in cars. It’s at shift change when the Border Patrol stations hum with activity, as one contingent of agents head out to the field and others return in their green-and-white trucks, jeeps, and vans. Before the border security buildup, it was not uncommon that agents had to wait to go out on patrol until the previous shift returned their vehicles.

With the ever-increasing budget for immigration enforcement and border patrol, border patrol vehicles are abundant. As a guideline, there are currently three vehicles for every two agents, and one vehicle for each supervisor. One of the reasons that the Border Patrol needs so many vehicles, explained Officer Cordero, is that even if agents aren’t driving they have the engines idling while they are on watch, which, he noted, is really hard on the Border Patrol’s vehicle fleet.

The declining number of immigrants arrested by the Border Patrol reflects a decreasing northbound flow of immigrants. A study by the Pew Hispanic Center estimated that 800,000 undocumented immigrants successfully crossed every year into the United States between 2000 and 2005, while that flow declined to 500,000 in the past few years, with year-to-year drops.

As part of a new effort to justify its seemingly ubiquitous presence in remote areas like Ft. Hancock, the Border Patrol is increasingly asserting that it is protecting border communities against criminal aliens. In its 2008 year-end report on accomplishments, the Border Patrol said that the El Paso Sector "prosecuted a total of 8,144 individuals, which includes 3,120 felony and 5,024 misdemeanor cases."

In its news release, the El Paso Border Patrol said that it "has made significant improvements but the work is not done." El Paso Sector’s Chief Patrol Agent Victor M. Manjarrez Jr. said, "We live in an age that is dangerous and uncertain, but the United States Border Patrol remains committed to the security of the border; we will continue to support the communities we serve."

But throughout the borderlands, there is increasing community resentment of the Border Patrol. With fewer illegal immigrants crossing, agents are increasingly stopping local residents, both randomly and at highway checkpoints. And as the number of border crossers drops, the Border Patrol is increasingly patrolling areas far from the border but still within the 100-mile band north and south of the Mexican and Canadian borders.

At least in the borderlands, the mission of the Border Patrol is increasingly unclear. It says its central mission is "Protecting Our Borders against Terrorism." Yet nowhere among the metrics of success used by the agency are statistics about terrorist arrests that would justify the continuingly increasing deployment of agents along the southern border.

Yet the security rhetoric persists. As Border Patrol Commissioner Robert Bonner said, "We understand that as America’s frontline, the security of a nation rests on our shoulders. We have learned the lessons of 9-11 and are working day and night to make America safer and more secure."

Along America’s frontline, however, there is increasing criticism that the large numbers of Border Patrol agents in remote places like Ft. Hancock are intrusive, and that the agency is like an occupying force whose hundreds of new agents don’t understand the borderlands or respect its residents. 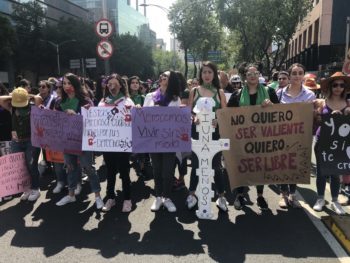 The Day We Made History: International Women’s Day in Mexico City