The Pentagon budget submitted to Congress on May 7 includes $46 million for development of a new U.S. military base in Palanquero, Colombia.

The official justification states that the Defense Department seeks "an array of access arrangements for contingency operations, logistics, and training in Central/South America."

The military facility in Colombia will give the United States military increased capacity for intervention throughout most of Latin America. The plan is being advanced amid tense relations between Washington and Venezuela, Bolivia, and Ecuador, and despite both a long history and recent revelations about the Colombian military’s atrocious human rights record.

In this Obama is on point. This base would feed a failed drug policy, support an abusive army, and reinforce a tragic history of U.S. military intervention in the region. It’s wrong and wasteful, and Congress should scrap it.

With help from the Transportation Command and AMC, the SouthCom noted that "nearly half of the continent can be covered by a C-17 without refueling" from Palanquero. If fuel is available at its destination, "a C-17 could cover the entire continent, with the exception of the Cape Horn region," the AMC planners wrote.3

A U.S. Embassy spokesperson in Bogota said that negotiations are not yet concluded for the base.

The SouthCom is also pursuing access to a site in French Guiana that would permit military aircraft to reach sites in Africa, via the Ascension Islands, according to AMC.4 SouthCom apparently sought use of facilities in Recife, Brazil for the same purpose, but "the political relationship with Brazil is not conducive to the necessary agreements," AMC wrote.

The lease for the U.S. "Forward Operating Location" in Manta, Ecuador expires in November 2009, and Ecuador notified Washington last year that it would not renew the lease. The facility in Manta was authorized to conduct only counter-drug operations. Yet, according to military spokesmen, drug traffic in the Pacific—where aircraft from Manta patrolled—has increased in recent years.5 U.S. forces in Manta also carried out operations to arrest undocumented Ecuadorans on boats in Ecuadoran waters. But public documentation of U.S. operations conducted from Manta does not indicate use of C-17 cargo aircraft, so their use in Palanquero apparently would represent an expanded U.S. military capacity in the region.

The "mission creep" in the proposal for continent-wide operations from Colombia is also evident in President Obama’s foreign aid request for Colombia. While the budget request for $508 million tacitly recognizes the failure of Plan Colombia drug policy by cutting funds for fumigation of coca crops, the White House is asking for an increase in counterinsurgency equipment and training to the Colombian Army.6

Colombian and U.S. human rights and political leaders have objected to continued funding of the Colombian army,7 especially after revelations that the army reportedly murdered more than 1,000 civilians and alleged they were guerrillas killed in combat, in order to increase their body count.8 The Palanquero base itself, which houses a Colombian Air Force unit, was banned from receiving U.S. aid for five years because of its role in a 1998 attack that killed 17 civilians, including six children, from the effects of U.S.-made cluster bombs.9 The United States resumed aid to the unit last year.

Colombian Defense Ministry sources said that Colombia was attempting to obtain increases in U.S. military aid as part of the base negotiations.10 Palanquero offers the U.S. military a sophisticated infrastructure—a 10,000-foot runway, hangars that hold more than 100 aircraft, housing for more than 2,000 men, restaurants, casinos, supermarkets, and a radar system installed by the United States itself in the 1990s.11

Colombian activists also point out that a new base at Palanquero would reinforce the existing U.S. military presence at other bases in Colombia, such as Tres Esquinas and Tolemaida. "The militarization of Palanquero is an obstacle to effective and visionary peace initiatives such as those promoted by communities throughout the country, as well as to the humanitarian exchanges developed by Colombians for Peace," says Danilo Rueda of the Intercongregational Commission for Justice and Peace.12

"Colombian military bases where there are foreign—especially U.S.—soldiers, provide tangible evidence that in this country there is neither sovereignty, nor autonomy, nor independence," says the Medellín Youth Network. The Palanquero base, the Youth Network says, "is the political lobby, is the payment and the legal lie so that the armed conflict generated by social inequality may be turned over to others."13

U.S. law caps the number of uniformed U.S. soldiers operating in Colombia at 800, and the number of contractors at 600. Until last year, a significant number of them were intelligence personnel assigned to the effort to rescue three U.S. military contractors kidnapped by the leftist FARC guerrillas. With the rescue last year of the three contractors, many U.S. intelligence staff left Colombia, leaving space for soldiers to run operations in the prospective new U.S. base or bases.

Former defense minister and presidential candidate Rafael Pardo opposes the base. "That the Colombian government asks for a U.S. base now would be a serious error," he says.14

Replacing one military base that was set up for the failed drug war with another base to intervene in South America and to support the abusive Colombian army would be a serious error for the United States as well. 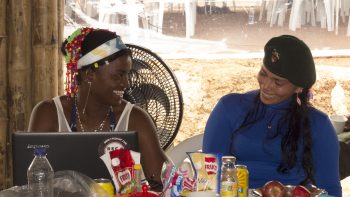 Women of FARC Face Obstacles in Reincorporation into Civilian Life

Victims of Agrochemicals Break their Silence