Given Obama’s campaign pledge to renegotiate the North American Free Trade Agreement (NAFTA) to incorporate environmental precepts, one issue that must be addressed is the agreement’s contribution to Mexico’s hazardous waste problem.

In response to domestic demands, the United States, Mexico, and Canada signed the parallel North American Agreement on Environmental Cooperation (NAAEC) and established the Commission for Environmental Cooperation (CEC). In addition to promoting collaboration between NAFTA parties on environmental issues, one specific goal of NAFTA’s environmental side agreement was to enhance Mexico’s ability to mitigate the negative environmental effects associated with increased economic activity driven by liberalization. However, the past 15 years have shown the agreement’s provisions related to hazardous waste regulation to be insufficient.

Any effort to renegotiate the role of the environment in NAFTA must include a review of generation, transport, disposal, and management of hazardous wastes. Until then, Mexico will continue to face significant challenges to ensuring the "environmentally sound and efficient management" (ESM) of the hazardous waste it generates domestically, the hazardous waste produced by the maquiladora sector, and wastes imported from the United States.

Marion Lloyd, writing for EcoAméricas in 2008, reports NAFTA’s legacy to be "thousands—if not millions—of tons of untreated hazardous waste." Hazardous waste is accumulating in Mexico that is either treated improperly or dumped illegally.

These numbers are leading to a hazardous waste crisis, given the increasing amount of hazardous waste needing treatment in Mexico. The increase stems from the combination of increased domestic production, insufficient repatriation shipments by maquiladora plants along the U.S.-Mexico border, and increased hazardous waste imports from the United States.

A greater level of domestic hazardous waste generation is the primary source of accumulating waste needing proper treatment. Post-NAFTA years have seen an increase in Mexico’s industrial activity, driven by the country’s "comparative advantage" in manufacturing due to cheap labor. The growth of the industrial sector leads to a subsequent increase in hazardous waste generation.

A second indicator of Mexico’s hazardous waste problem is repatriation trends seen in the maquiladora industry. Pursuant to domestic law in Mexico, foreign-owned manufacturers are exempt from paying customs duties on imports used for processing, and pay tax only on the value-added of the final exported product. That agreement stipulates that any hazardous waste generated from production processes that use duty-free imports must be repatriated back to the maquiladora’s country of origin or (pursuant to recent domestic law in Mexico) recycled domestically at approved facilities.

Even in the absence of accurate data and complete reporting, it is clear that foreign companies are not fully complying with the repatriation rule. Lloyd reports that in 2007, less than one-fifth of hazardous wastes generated by U.S.-owned maquiladoras was sent back to the United States. As the vast majority of maquiladoras are U.S.-owned, this represents a grave problem, especially in the context of post-NAFTA years, in which the number of maquiladora plants has risen significantly. In 1990 there were 1,704 maquiladoras and in 2004 this number had increased to 2,825.

Increased imports of hazardous waste from the United States have also played a role in Mexico’s accumulating levels of improperly treated or illegally dumped hazardous waste. Pursuant to domestic law in Mexico, hazardous waste imports are only permitted for recycling or recovery purposes. While this provision allows U.S. exports to enter the country, the problem is how these wastes are handled once they arrive, a concern recently expressed by the Environmental Protection Agency (EPA) and the CEC Enforcement Working Group (EWG) during the 2008 meeting of the National Advisory Committee to the U.S. Representative to the CEC: "EPA and EWG are concerned that hazardous waste that should be crossing the border for proper disposal often does not reach the desired destination."

The improper disposal of hazardous waste shipped to Mexico is especially troubling given trends of increasing export shipments reflected in U.S. EPA data. In 2002 the United States reported exporting 130,000 tons to Mexico and by 2006 EPA data reported this number to have increased to 161,026 tons. However U.S. data only reflects wastes defined as hazardous under the U.S. Resource Conservation and Recovery Act (RCRA). As Mexico’s definition of hazardous waste includes waste streams not covered under RCRA, discrepancies exist as to the actual volume of hazardous waste shipped from the United States to Mexico. For example, in 2002 Mexican data reported the total volume of hazardous waste received from the United States to be 325,000 tons, a difference of 195,000 tons when compared with EPA data. It is also important to note that neither U.S. nor Mexican data incorporates illegal shipments going to Mexico. Officials on both sides of the border admit this exists but say they are unable to calculate the frequency or volume.

Mexico does not have sufficient disposal infrastructure to handle domestically generated hazardous waste as well as the waste left by maquiladoras and that imported from the United States. The country only has one official operating hazardous waste disposal facility, privately owned by Residuos Industriales Mutiquim and located in the state of Nuevo León, which estimates its annual waste management capacity to be around 600,000-800,000 tons a year—though Mexico’s Instituto Nacional de Ecología (INE) reports it to be 1,200,000 tons a year.

NAFTA’s Contribution to the Pile-Up of Hazardous Waste

In post-NAFTA years, regional integration and increased trans-boundary trade and investment has led to significant changes in Mexico’s hazardous waste situation. Specifically, the country has seen a greater scale of industrial activity, a shift toward specialization in hazardous waste-producing industries, and an increase in hazardous waste imports from the United States. By giving authority on hazardous waste regulation to Annex III of La Paz, NAFTA’s impact has not been adequate to ensure environmentally sound management or to mitigate the environmental reality of trade-driven economic growth.

Others, like Sanford Gaines writing for the journal International Environmental Agreements: Politics, Law, and Economics,also cite the "chilling effect" NAFTA may have had on the creation of new environmental regulations. For example, perceptions of Chapter 11 and the concern that environmental regulations will be interpreted as "tantamount" to expropriation may have prevented innovation in Mexico’s domestic mitigation regime or the creation of tighter regulations. This already happened in the 2000 Metalclad case, in which a NAFTA arbitration panel awarded Metalclad, a U.S. hazardous waste company, over $16 million in damages when the company was denied local permits to reopen a hazardous waste landfill.

From a legal perspective, it is clear that by ceding authority to La Paz, which in turn cedes to domestic legislation, NAFTA is unable to harmonize trans-boundary regulation or enforcement activity. Annex III of La Paz does not effectively harmonize differing domestic definitions of which wastes are considered hazardous, nor does it assert a specific definition of illegal trade or mandate an explicit prior informed consent (PIC) procedure that incorporates ESM. As a result, many of the compliance monitoring and enforcement activities necessary to regulate the maquiladora sector and to ensure ESM of imported wastes fall primarily on Mexican authorities.

For example, as a party to the Basel Convention, Mexico should not consent to any hazardous waste shipment for which it cannot guarantee ESM. However, if Mexico does consent to an export from the United States, the EPA cannot prevent the U.S. exporter from shipping (or force re-importation) even if the exporting company has not ensured ESM and knows the shipment will be illegally dumped. Under La Paz, re-importation is only mandated for illegal shipments (which it fails to specify). If Mexico consents to receive the shipment, the shipment is not illegal.

NAFTA and La Paz’s provisions on technology transfer and capacity building have not been sufficient to address Mexico’s struggle with data capturing or the successful siting of treatment, storage, and disposal facilities. As stated above, the country only has one legal disposal facility and this inadequate disposal infrastructure is a main cause of improper treatment and illegal dumping.

Finally, despite NAFTA, NAAEC, and La Paz’s tenets of cross-border coordination and cooperation, there is no official documentation or recognition that Mexico’s hazardous waste problem exists. Government and non-government officials on both sides of the border are willing to individually admit trans-boundary hazardous waste regulation poses a significant problem, but there has been no official effort to agree upon and document the extent of Mexico’s limited mitigation capacity or NAFTA’s contribution to it.

At the policy level, there are a number of steps that can be taken to remedy this situation and ensure NAFTA promotes effective trans-boundary hazardous waste regulation. President Obama’s campaign pledge to rethink the role of the environment in NAFTA provides a great platform to begin a discussion on improving trans-boundary regulation of hazardous waste and in turn improving the situation in Mexico.

Much must be done under NAFTA to improve the agreement’s role in Mexico’s hazardous waste regulation. While this is not meant to overlook the positive impact the agreement has had or the responsibility of the Mexican government to increase domestic implementation and enforcement, improving hazardous waste regulation at a tri-national level is essential. Changing the regulatory atmosphere to ensure NAFTA incorporates sufficient provisions to mitigate the negative environmental impact of trade-led growth is the first step to addressing Mexico’s hazardous waste problem. President Obama’s campaign pledge to rethink the role of the environment in NAFTA represents the policy space and motivation that exists to do so. 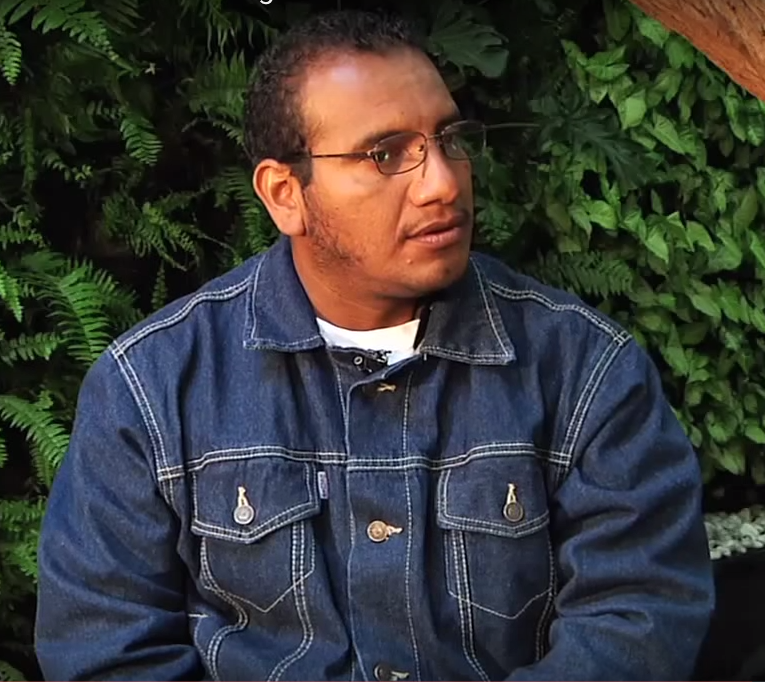 Violations of Human Rights in Guerrero: A Conversation with Vidulfo Rosales