On Nov.16, 2009 the legislature of the Mexican coastal state of Veracruz passed a law declaring that life begins at conception and ends at natural death. Veracruz now becomes the 17th state in Mexico to criminalize abortion in a string of hotly contested and reactive measures set off by Mexico City’s April 2007 legalization of abortion.

The reforms to the Veracruz State Constitution include a last-minute stipulation by the National Action Party (PAN) that women who illegally obtain abortions can avoid jail time by accepting medical and psychological treatment. This change, they say, will "defend the right to life and protect women."1 Margarita Guillaumín, of the Party of the Democratic Revolution (PRD), retorted, "Now women who feel driven to abort are ill, crazy, unhinged, perturbed—and they are going to rehabilitate them. Hallelujah!"2

The debate in Veracruz, fueled by passion and anger, is characteristic of the larger fight throughout Mexico on the issue of abortion that spans the personal and the political. The abortion wars in Mexico involve political issues, such as the direct intervention of the Catholic Church in a secular state, and health issues deriving from the high incidence of complications from clandestine abortions.

On a personal level, the abortion debate forces the society and politicians to examine the hidden implications of stringent abortion policies and clandestine abortions on the health and lives of Mexican women.

A Brief History: From Mexico City to Veracruz

On Aug. 24, 2007, after much discussion in churches, on the streets, and in the media, the Legislative Assembly of Mexico City voted 46-17 to reform the penal code and health laws to de-penalize abortion within the first 12 weeks of gestation. After 12 weeks, the new reforms stated, women who got abortions could be penalized with 3-6 months in jail or 100-300 days of community service. Prior to this law, women in Mexico City could only legally get an abortion for rape, fetal malformation, risk to the mother’s life, or artificial insemination without the consent of the woman.

Despite the uproar after the decision, the vote did not surprise many people who followed the debate. Mexico City’s legislature was led by the liberal PRD, which was supported in the vote by the Institutional Revolutionary Party (PRI) and several smaller parties. Not surprisingly, President Calderon’s conservative PAN, consistently outspoken against abortion, opposed the reforms.

Immediately following the Mexico City legislation, the PAN filed a challenge before the Supreme Court, claiming that the ruling was unconstitutional. The Supreme Court held six public hearings on the issue, with 40 people speaking on both sides of the argument. Finally, on Aug. 28, 2008, the Supreme Court upheld the abortion law by an 8-3 vote. Many people felt that this ruling would set the stage for other states to pass similar reforms, loosening laws on abortion.

How wrong they were. Before pro-abortion activists could begin to celebrate the victory, it quickly became obvious that a backlash against the Mexico City ruling was spreading throughout the country. Prior to the ruling, the northern state of Chihuahua was the only state with a so-called "personhood amendment." But within three months of the Supreme Court upholding the Mexico City ruling, Morelos, the state just south of Mexico City, amended its constitution to declare that life begins at conception. And so began the trend of legally equating abortion with homicide: first in Morelos, and eventually in Baja California, Campeche, Colima, Durango, Guanajuato, Jalisco, Morelos, Nayarit, Oaxaca, Puebla, Quintana Roo, Querétaro, San Luis Potosí, Sonora, Yucatán, and now Veracruz. The issue is also being discussed in Michoacán and Aguascalientes.

Jalisco is a prime example of Mexico’s anti-abortion offensive, which mirrors similar but unsuccessful efforts in the United States. The ultra-conservative PAN Governor Emilio Gonzalez Marquez recently filed an appeal to prevent women from aborting for any reason, including rape. At a press conference, Gonzalez stated, "To me, and in the eyes of the people of Jalisco, abortion is wrong."3 This is the same governor who launched a campaign to prevent HIV through abstinence and fidelity, saying, "AIDS is spread through promiscuity, not by not using condoms."4

The implications of the constitutional amendments in Veracruz and other states are huge, and bring the debate to the federal level. The state has adopted a proposal that requires Congress to consider outlawing abortion for the whole country, an act that is permitted because the constitution affirms that a state legislature can propose an amendment that must be considered by Congress.

What’s more, this legislative trend demonstrates the blurring of the line between secular and state affairs, and the Church’s meddling in state politics.

The similarity between the statements of the Church hierarchy in Mexico and the language used in the anti-abortion legislation demonstrate that the Catholic Church has played a major role in recent legislation. Following the 2007 Mexico City ruling, Pope Benedict wrote a letter to Mexican bishops, encouraging them to oppose the law. Church leaders in Mexico threatened to excommunicate politicians who supported the law. "They will get the penalty of excommunication. It’s not revenge, it’s just what happens in the case of serious sins,"5 said the archbishop of Acapulco.

In a country with a Catholic majority but a secular state, the active participation of the Church has raised accusations that the Church hierarchy is overstepping constitutional boundaries, albeit through indirect channels. Javier Flores argues in a recent column in the Mexican daily La Jornada that since Mexico is a secular state the Church has had to hide its actions behind "political parties in the states, civil society organizations, bioethics committees created ad hoc, parents’ associations, intellectuals, doctors, and scientists."6 However overt or discreet, the Church has no doubt become an active participant in the abortion legislation wars, and as a result, in the very intimate lives of women.

What Anti-Abortion Laws Mean for Women

Amidst the bickering of political parties, the outcry of secularists, and the many larger questions surrounding abortion policies, how are real-life women affected by this law? How do these constitutional reforms play out on the ground and what choices does a woman have with an unplanned pregnancy?

Though precise numbers are impossible to attain, it is estimated that the number of abortions in Mexico increased from 533,000 a year to 875,000 a year between 1990 and 2006.7 To obtain a legal abortion in most states, you must file a request with the government, proving that you can legally receive one—usually the reason must be rape.

Dr. Olivia Piña Ballesteros, a gynecologist at a Mexico City clinic of the non-profit organization Mexfam, completely dismissed the possibility of getting a legal abortion before 2007, explaining that the bureaucracy was nearly impossible to overcome, and that if and when a report was filed, the baby was already born. A 2006 Human Rights Watch report supports this observation, citing evidence that state officials use bureaucracy, intimidation, and humiliation, among other things, to prevent women from getting abortions for pregnancies resulting from rape.8 It can therefore be assumed that abortions in Mexico before 2007 were almost entirely clandestine abortions.

The culture, logistics, and risk in clandestine abortions have been all but forgotten in the United States, since the 1973 Roe v. Wade decision. Dr. Piña explains that in Mexico these abortions are often done with unsterile instruments and in dangerous places, by midwives, general practitioners, or people posing as doctors. The result is that as a gynecologist in Mexico City before the 2007 ruling, Dr. Piña saw a high number of patients for complications from abortions. According to the Mexican Institute for Social Security, 63% of all hospitalizations for pregnancy-related problems are due to complications from abortion.9

Zaira Berenice Gutiérrez, a psychologist at the same Mexfam clinic, explains the culture of clandestine abortions. Gutierrez became involved with family planning organizations after the experience of taking a friend to get an illegal abortion when she was 16. She explains that everyone knows where to find these centers, known as clinicas mata ciqüéña (stork-killer clinics). There, the patient and the person accompanying her sign a form stating they are over 18, and that they will not disclose the center in the case of complications.

"Before," explains Gutierrez, "we could explain to women their options, but if they decided to get a clandestine abortion, they were out the door and we never saw them again. Now, we are secure in the knowledge that the women are getting good care and proper follow-ups. And they know they have our support."

With abortions done secretly and in unprofessional settings, it is no wonder that so many wind up with possibly life-threatening complications. According to a 2009 study by the Colegio de México, the Mexico office of the Population Council, and the Guttmacher Institute, 17% of Mexican women who got abortions in 2006 were treated in public hospitals for complications, compared to the United States where less than 0.3% of abortion patients require hospitalization.10

The report also finds that more women get abortions in Mexico than in the United States, where abortion is legal. "These findings confirm research from other parts of the world—that making abortion illegal does not significantly decrease its frequency, it just makes it unsafe and puts women’s lives at risk," says Fatima Juarez, the principle researcher in the Guttmacher study.11

Why So Many Abortions?

The high rate of abortions in Mexico also begs the question of why the country has so many unwanted pregnancies. Mexico’s governmental family planning program was started in 1974, and is considered to be a largely successful program, with the Mexican birthrate now at 2.4 children per woman.12 But according to Estela Kempis, a doctor in Cuernavaca who runs her own clinic, knowledge of contraceptive methods is minimal among her patients. Worse yet, she notes, many women are misinformed.

Kempis points to a lack of sex education in the country. "The educational program is not adequate—and I’m referring to the basic subjects: mathematics, Spanish, grammar. Now imagine how little chance there is for sex education. Sex education is a disaster."

If the Mexican educational system does not adequately supply its students with quality and comprehensive sex education to create a culture of safer sex, how can the Mexican government expect women to avoid unwanted pregnancies? The answer, of course, is that they cannot, and it is women who pay the price.

Women get abortions—legally or illegally—for many reasons: timing, career, poverty, rape, incest, and risk to their own lives. While many activists employ the language of choice to describe this debate, in most of Mexico the limitation of choices means women can either proceed with an unwanted pregnancy, or end it in dangerous and often life-threatening settings. The government faces the real choice: continue standing by while women risk their lives by seeking clandestine abortions, or make abortion legal, and allow women make their own choices with access to professional medical care.

The debate over women’s bodies in legislatures across the country exhibits the ever-widening chasm between politics and the lives of ordinary Mexicans. Despite the loud political rhetoric, the real losers will not be the politicians. Instead it will be the hundreds of thousands of unheard women who put themselves at risk as they bravely make their own choices about their own lives. 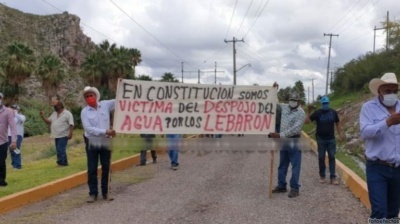