After a year in office, we can no longer base our responses to Obama’s foreign policy on expectations. Although the administration is still in the process of consolidating its team, this year provided some key challenges that serve to define the new government’s positions.

To assess the pace of promised change in our part of the world—the Western Hemisphere—the Americas Program staff and our colleagues at the Center for International Policy (CIP) looked at four basic questions regarding progress (or lack thereof) in our areas of expertise: How we rate the Obama administration over the past year; what we expect in 2010; what policy changes are needed in 2010; and what issues we expect to be grabbing headlines and foreign policy attention in the upcoming year.

The idea is not only to weigh in on the performance of President Obama, Sec. of State Hillary Clinton, and other key players in the administration, but also to identify the most pressing needs for policy reform left pending or botched up to now.

Across the board, our analysts found that the Obama administration is falling short of promoting the principles of reconciliation, self-determination, mutual respect, social equity, and peace that he espoused at the April 2009 Americas Summit. Looking back over the year, Adam Isacson on Colombia, Wayne Smith on Cuba, Laura Carlsen on Mexico, and Tom Barry on the U.S.-Mexico border conclude that Obama policies so far look a lot like the Bush administration’s…

The arrest of a U.S. citizen in Cuba on Dec. 4 has dealt another blow to hopes that Cuba and the United States could normalize diplomatic relations. The American was arrested at José Marti International Airport as he tried to board a U.S.-bound flight. Cuban officials say the man has been detained on allegations of espionage, an accusation strongly refuted by U.S. officials. Nevertheless, this latest episode gives credence to the notion that U.S.-Cuban relations have taken a turn for the worse, and even the most sanguine of optimists agree that the window of opportunity created by the election of Barack Obama is quickly slamming shut.

Since its creation in March 2003, the Department of Homeland Security (DHS) has built up an immense immigration database that is now integrated with the FBI’s criminal database, all of which is now shared with local law-enforcement officials. The resulting information system is the main instrument of the immigrant crackdown that is detaining and deporting record numbers of illegal immigrants, and legal immigrants who have criminal records.

Rio de Janeiro: Control of the Poor Seen as Crucial for the Olympics
By Raúl Zibechi

The prospect of the FIFA World Cup in 2014 followed by the Olympic Games in 2016 has reignited the debate about public security in a country where there is an undeclared war taking place in the favelas between the military police, paramilitary groups, and drug traffickers, but where the principal victims are the poor.

The mountain sides around Rio have been home to poor migrant workers for over 50 years. They live in precarious conditions without water, electricity, sanitation, healthcare, or education. Statistics show that 20 people per day are assassinated in Rio, turning the city into what the sociologist Vera Malaguti terms "a laboratory of genocidal techniques." The police in Rio have the dubious reputation of being the police force with the highest kill-rate in the world. This war against poverty, camouflaged as a war against drug trafficking—in the same way as in the past it was defined as a war against communism—seeks to contain "rebellious poverty." The elites are making the poor pay for their historically ingrained rebellion, which now threatens the lucrative businesses of 2014 and 2016.

Nine days after the devastating earthquake that struck Haiti on January 12, 2010, it’s now clear that the initial phase of the U.S.-led relief operation has conformed to the three fundamental tendencies that have shaped the island’s recent history. It has adopted military priorities and strategies. It has sidelined Haiti’s own leaders and government, and ignored the needs of the majority of its people. And it has proceeded in ways that reinforce the already harrowing gap between rich and poor.

All three tendencies aren’t just connected, they are mutually reinforcing. These same tendencies will continue to govern the imminent reconstruction effort as well, unless determined political action is taken to counteract them.

The New Developmental Extractivism in South America
By Ricardo Verdum

Society, the economy, politics, and the environment are undergoing profound transformations in South America, especially in the Amazon. It seems that the region will continue to serve as a strategic territory for the global political economy. In the meantime, its importance will remain even more rooted in its potential as the supplier of resources that become raw materials for the most dynamic manufacturing centers, located mainly outside the South American subcontinent.

What calls the attention of some analysts is that it is precisely the progressive and left-wing governments—elected on "post-neoliberal" political platforms that criticized the model—who now reaffirm the region’s role as a supplier of natural resources.

Not only are the major private prison corporations seeing their profits soar from the surge in immigrant inmates, Native American corporations, as the favored recipients of Department of Homeland Security contracts, are also cashing in on the growing opportunities to make money by detaining and imprisoning immigrants.

Guantanamo and GEO Group Ready for Haitians
By Tom Barry

The catastrophic earthquake that has devastated Haiti has sparked questions about immigration and deportation. In addition to the Obama administration’s decisive response to the disaster with aid, it has suspended deportations to Haiti and is granting temporary protected status to Haitians living in the United States without proper immigration documents.

"Guantanamo is going to be an enormously valuable asset as we go through this," State Department spokesman P.J. Crowley told reporters on Thursday. [Guantanamo] is in the vicinity. … So we’re identifying all of the assets in the region that we can use in order to stage operations." 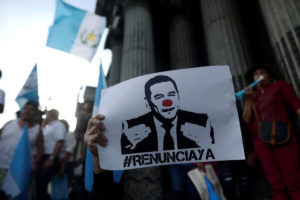