On the evening of Saturday, June 16 two environmental activists and human rights defenders were with friends in front of city hall on the main street of San José del Progreso, Mexico. Suddenly a red Dodge Ram pickup truck drove by, spraying them with bullets.  Bertín Vásquez Ruiz was shot in the abdomen and Guadalupe Vázquez Ruis took bullets in his leg and hand. Both are members of the Coalition of United Peoples of the Ocotlán Valley (CPUVO), which has been actively protesting the presence of Canadian Fortuna Silver Inc.’s Trinidad/Cuzcatlán mine in their community south of Oaxaca city, Mexico.

Both of the shooting victims were taken to a public hospital, where they received cursory attention. Shortly after arriving at the civil hospital, for example, Bertín Vázquez reportedly was released—with the bullet still in his abdomen. He was later taken to a private (paid) hospital where the bullet was removed.  Both of the shooting victims are said to be in stable condition.

Who did the shooting?

Eyewitnesses identified three of the gunmen, all allegedly connected in some way with the Trinidad/Cuzcatlán mining operation.  Local media report that they named Evaristo González—apparently an employee and hired gun of the Fortuna Silver mine, Edgar Vásquez Hernández—son of previous municipal president who gave permission for the mining operations in San José del Progreso, and Aarón Pérez Vásquez—a local school superintendent, as the supposed shooters.

Opposing the Vancouver-based Fortuna Silver mining operation in San José del Progreso in recent months has become increasingly dangerous—and even deadly. Activist and CPUVO member Bernardo Méndez was shot dead on January 23 this year when, along with group of people from San José, he confronted a crew working on a water pipeline in the community. They suspected that the line would divert water from the arid town’s scarce water supply and be used for mining operations. Workers refused to show work permits to the crowd as requested.  An argument ensued and soon municipal police arrive on the scene. Witnesses report hearing the voice of San José mayor Alberto Sánchez Muñoz over a radio giving the police an order to open fire. Méndez was shot seven times and died soon afterwards.  Another member of CPUVO, Abigail Vásquez, was also shot and seriously wounded in the incident.

Another activist and member of CPUVO was assassinated on two months later.  On March 15 this year Bernardo Vásquez was shot and killed when his vehicle was ambushed just outside of San José.  His brother, Andres, and friend Rosalinda Canseco were also seriously wounded in the attack.  Doctors worried that Rosalinda’s leg would have to be amputated due to the grave gunshot wounds.  That risk has passed, and she is currently undergoing physical therapy.  No one has been charged in the crimes despite the existence of what many observers call considerable, concrete evidence—including photos of alleged assailants published in local media.

Why the opposition and bloodshed?

Members of CPUVO oppose the Trinidad/Cuzcatlán mine for a variety of reasons. Water is a central concern. The area’s supply of potable water is increasingly scarce, and mining operations require vast quantities of water. Townspeople also express concern about contamination of water sources and lands by the toxic chemicals used by the mine to process silver and gold ore—such as cyanide, arsenic and heavy metals.

They have reason to be concerned. The nearby Canadian Continuum mine in Capulálpam de Méndez, seriously disrupted and polluted aquifers there. Local residents report that due to the mining activities, 13 local streams disappeared and community springs were so polluted by the chemicals used to process ore that livestock died from drinking the water. The environmental destruction caused by the Continuum mine was so flagrant that the Mexican Federal Environmental Protection Agency suspended operations.

The Fortuna Silver mine has divided the town and created an atmosphere of pervasive tension and fear, often leading to violence.  Townspeople say that the majority of the community was opposed to the mine when it first opened. In 2009, some 300 people blockaded the mine’s entrance for more than a month. Around 700 police were sent in to violently break the blockade, beating people and arresting 23. The repression has silenced some of those opposed to the mine, and allegedly bribes and other corruption have been employed to gain support for the mine.

After the assassinations of the two CPUVO activists in January and March, Fortuna Silver issued a public statement expressing its sadness over the acts of violence it claims are “…related to a long-standing power struggle for local power… It is in no way related to our activities or involves company personnel.”  Critics, however, challenge those assertions, pointing out that the violence in San José clearly began with the arrival of Fortuna Silver in the community.

During the company’s public presentation of financial earnings for the first trimester of 2012, Fortuna Silver Inc., someone in the audience asked President Jorge Garzona about the mining company’s relationship with the community of San José. He responded that they have a strong relationship with the town’s authorities and with the majority of people in the community. He added that there are “reactionary groups that oppose any development project in the area—not just mines.”

According to accusations by CPUVO, the assassinations and assaults this year against environmental and human rights activists who oppose the Trinidad/Cuzcatlán mine were perpetrated by municipal authorities and employees of the mining company. Members of CPUVO have repeatedly denounced in the media and to the state government that the mine is financing armed groups in the community, with the endorsement of San José’s municipal president Alberto Mauro Sánchez. In a recent press release by prominent human rights and civil society organizations in Oaxaca organized in the Coalition in Defense of Territories declared:

“Since the beginning of the current year CPUVO has denounced the irregularities and violations caused by the mining company Cuzcatlán and the municipal authorities of San José del Progreso, nevertheless, up until this moment there has been no adequate reply on the part of the state government in reference to the problems”.

The coalition calls for investigations into the recent violence, that the guilty be brought to justice, and protective measures to assure the security of human rights defenders and environmental activists.

No one has been charged in any of the attacks, and the assassins remain at large.  Observers express concern that the lack of justice and impunity granted the perpetrators creates an atmosphere of continuing fear and insecurity in San José.  The recent attacks, unfortunately, give credence to those concerns.

Given the ongoing, unprosecuted violence in San José, the Oaxaca Coalition in Defense of Territories declared its deep concern for the increasing vulnerability of human rights defenders in the state of Oaxaca, and demanded immediate and effective actions on the part of the Oaxacan state government.

To date, the state government has not responded; there has been no official public comment whatsoever on the recent shootings in San José del Progreso.

Text and photos by Jonathan Treat,  a journalist, professor, activist and founding member of the non-profit organization, University Services and Knowledge Networks of Oaxaca (SURCO, A.C.), www.surcooaxaca.org, an organization that leads delegations and educational activities related to indigenous rights in Oaxaca and Chiapas. He is a frequent contributor to the CIP Americas Program www.americas.org 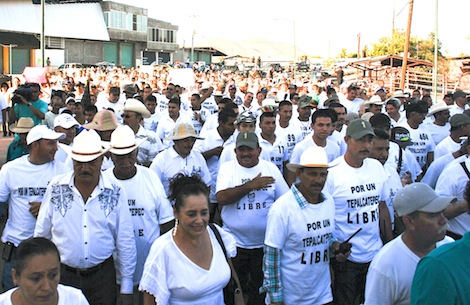