Sixty-seven years have passed since the Declaration, during which international conventions on the particular rights of women, children, the disabled, migrants and others have been drafted and adopted. Mexico has been a signatory to all of these conventions. Four years ago it passed its first Migrant Law, which promised significant advances for the human rights of migrants passing through the country, at least according to the Feb. 24, 2011 transcript of the congressional session where the senators’ speeches announced freedom of movement and celebrated the inclusion, in the law’s Article 2, of the so-called ten commandments of the human rights migrants.

The month after that law was passed, Article 1 of the constitution was amended to say that both citizens and foreigners will enjoy the human rights recognized by the constitution and by international treaties to which Mexico is a signatory.

At the beginning of this year, the UN High Commissioner for Human Rights made the following declarations about our country: “Mexico is a clear example of the form in which uncontrolled criminal violence can endanger democratic advances that have been achieved with so much effort. I have repeatedly expressed my concern regarding the generalized violence in some parts of Central America and Mexico, and the presumed links between organized crime, security forces and local and national authorities. The disappearance of 43 students in Iguala is far from an isolated case. Rather, it challenges the authorities to take decisive measures to end impunity and prevent this type of crime in the future.”

His declaration comes on top of the many calls to attention emitted by the Interamerican Commission on Human Rights, the European Parliament, Amensty International and numerous international organizations.

Mexican human rights violations are cause for international attention and concern, and migrants in transit, especially since 2006, confront a devastating increase in insecurity that places makes them prey to extrortions, asssaults, rapes, kidnappings, forced disappearance, and death, a situation that has gotten worse with the rise in vioelence in general in Meixco and Central America.

In spite of new laws, more international conventions signed, and declarations of good intentions, it’s clear that our practice in migratory policy forms part of the policy of the United States and responds to pressure from our major trade partner, particularly since the attacks of Sept. 11, 2001 and more recently the so-called “humanitarian crisis” decreed by Barack Obama in the summer of 2014. These became the perfect excuses for a severe hardening of the border, resulting in the constant and more and more violent acts of detention of undocumented migrants as part of Plan Frontera Sur, strategies of containment that invested millions of dollars in military “aid”, completely ignoring the role that the political-economic posers play in creating the same exodus that they now try to staunch by force.

The figures that reflect the effectiveness of these violent migration-containment programs indicate that 80% of migrants don’t make it  and become trapped on a carousel of  attempt-deportation-attempt in the hopes of one day being able to cross the border and establish themselves in the United States,  with only 18.3% achieving that objective. Mexico, their primary obstacle, deports 52.2% of migrants, while the US detains 29.5%. Estimates of the numbers of migrants crossing through Mexico do not include those who were lost along the way. They become the invisible among the invisible.

It is estimated that there are between 70,000 and 120,000 migrants missing in transit in Mexico since 2006. There are no reliable statistics that determine their quantity. The puny official figures reflect that the families of the disappeared lack the resources or migration documents to come to Mexico  to file formal reports in the public ministries, which are the only door to the official registry system and cannot be considered even remotely adequate. These estimates are based on the second Special Report on Kidnapping of Migrants in Mexico by the National Human Rights Commission, published in February 2011 that counted 214 kidnappings with a total of 11,333 victims in only six months.

The collusion of Mexican authorities from all levels of government with criminals, whether through action, omission, negligence, collusion, protection or complicity, is clearly documented. As of 2010, the government of Mexico could no longer continue hiding the massacres or the hidden graves that contain both Mexicans and migrants. The news of the killing of 72 migrants in San Fernando, Tamaulipas traveled around the world. It was discovered that the municipal police of San Fernando were directly involved in the migrants’ assassinations by serving as lookouts and intercepting people, and failed to carry out their duty by observing, without intervening, actions committed by the criminal organization “Los Zetas.”

Forced disappearance is the main issue. This is a tragedy that brings together Mexican and Central American families. Mexico has a huge debt to pay and it needs to settle accounts with what happens to people in its territory, as guarantor of social and personal security. International instruments consider that the crime of forced disappearance violates the victim’s right to personal security, to liberty, to life, and to not be subject to torture or other cruel, inhuman or degrading mistreatments.

The figures of forced disappearance in our country show a considerable jump in the past few years. According to the National Registry of the Disappeared and Misplaced of the Ministry of the Interior published in October 2014, 22,610 people have disappeared since Dec. 1, 2006 and were still missing in 2014. Almost 50% of these disappearances took place in just the two years between 2012 and 2014. The Secretary of the Interior appeared before the Senate and recognized that as of Dec. 31, 2014 there were 24,812 disappeared people, according to current reports, noting that many cases had not been subject to judicial investigations, including Mexicans and most foreigners.

The Interamerican Convention on Forced Disappearances of Persons (May 28, 1996) obligates member states to classify forced disappearance in their internal law in accordance with international standards. Mexico ratified this convention and it took effect in May 2002.

Thirteen years later, Mexico has still not changed its national law. Only last July 10, it was stated in the Official Journal of the Federation that a reform giving Congress the power to legislate about forced disappearance, and to comply with international obligations to classify it. When that legislation is passed, it will be possible to demand searches for the disappeared and for the truth about what has happened.

Currently, there are five initiatives in committees in the Senate to write and expedite the Law on Forced Disappearance and the disappearance of people by individuals, which should bring together the conditions laid out in the international regulations about the material. This law would create the criteria for a coherent policy and could put special emphasis on groups in vulnerable situations, like women, migrants, human rights defenders and journalists, in addition to responding to the demands of organizations and civil society.

The Law on Forced Disappearance should especially consider the fact that migrants that find themselves in transit through Mexican territory can easily become victims of kidnapping or murder, and that these crimes are almost never reported because of the insurmountable difficulty of going to a government office in Mexico when family resources are lacking, documented entry into the country is impossible and there are no mechanisms of international coordination to report crimes from other countries. Reporting a crime is a condition for guaranteeing a search and recognition of the victim, so the law should also recognize the need to provide conditions of security and economic resources.

In the Senate aisles, there are rumors that the legislative process to pass the Law on Forced Disappearance has been suspended until the executive power presents its own initiative for a general law on forced disappearance with the goal of expediting a law that will be able to count on the support of all the parliamentary groups.

From the podium provided by the large media companies, and with the relatives of migrants disappeared in transit through Mexico as honorable witnesses, we demand that the United Commissions of Justice, Human Rights and Legislative Studies conclude debate on the General Law to Prevent, Investigate, Sanction and Repair Forced Disappearance of Persons and Disappearance of Persons Committed by Individuals, incorporating vulnerable groups in its summary, especially migrants in transit through Mexican territory and the civil society organizations that defend them.

We’ve come to expect institutional solutions to be impotent. The reality of migration is found in hidden graves, disappearances, deaths on the border, sexual assaults, extortions and geopolitical conditions. Today, we are joined by the mothers and fathers, the brothers and sisters, from Central America who are searching for their loved ones, who are not in their place of origin, nor their destination, and the last communication they sent was from here–the country of transit.

“No, that’s not it, don’t worry…there are just some migrants buried there” 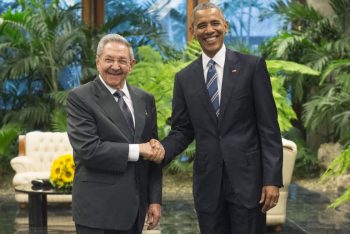 Cuba-U.S. Relations in the Trump Era An Interview with Santiago Espinosa