By the middle of 1997 officials from Chiquita Brands International had grown nervous about the company’s increasingly long list of so-called “sensitive payments” in Colombia.  For years Chiquita had been quietly paying off the leftist rebel groups that dominated the country’s banana-producing northern coast.  The company’s accountants had developed a color-coded classification system for the various guerrilla groups it kept on the books.  Chiquita had even employed anti-government insurgents as security guards on some of its farms.

But the balance of power was shifting away from the guerrillas and toward increasingly powerful paramilitary groups, and Chiquita’s security payments reflected this new reality.  Thousands of dollars that previously had gone to guerrillas were being redirected to the United Self-Defense Forces of Colombia (AUC), a confederation of drug traffickers and right-wing death squads that promised to drive guerrilla influence from the region and seize control of the illegal narcotics trade.  Over the next several years, Chiquita would contribute almost $2 million toward the AUC’s bloody expansion.

This complicated system of illegal payoffs was the “cost of doing business in Colombia,” according to notes taken at May 1997 Chiquita management meeting attended by General Counsel Robert Olson, Senior Counsel Robert Thomas (who probably took the notes), and company vice presidents Wilfred “Bud” White, William Tsacalis, and Robert Kistinger.  Looking at an estimated $120,000 in new security payments to the AUC in 1997, the group pondered the bigger picture: “Maybe the question is not ‘Why are we doing this?’ but rather … ‘Do we want to ship bananas from Colombia?’ … Need to keep this very confidential – People can get killed.”

As debate continues over the proposed U.S.-Colombia free trade agreement, revelations like these from the recently-published “Chiquita Papers” remind us that in Colombia strengthened commercial ties do not necessarily translate into greater respect for human rights or the rule of law.

This exciting new trove of confidential documents from inside the Chiquita fruit company lays bare for the first time how Chiquita, driven by profit and its own security concerns, plugged into an illegal paramilitary system endorsed by regional political and military officials and responsible for thousands of civilian killings.

The Chiquita Papers are also a critical new source of evidence for prosecutors and other investigators trying to understand the real power structures behind Colombia’s decades-old dirty war.  Long-delayed cases against politicians and military officers linked to paramilitary killings have only recently gotten underway in Colombian courts.  In many cases victims have waited more than ten years for a chance at justice.

Chiquita turned over thousands of confidential letters, legal memos, and accounting records to the Justice Department as part of a 2007 deal in which the company admitted paying some $1.7 million to the AUC—a State Department-designated foreign terrorist organization—and agreed to pay a $25 million fine.  The National Security Archive has obtained more than 5,500 pages of these records under the Freedom of Information Act.

“The Chiquita Papers” show for the first time that the banana giant actually benefited from years of illegal payments to Colombian guerrilla groups and right-wing death squads responsible for countless civilian killings.  The new evidence contradicts Chiquita’s long-held position—set forth in a 2007 sentencing agreement with U.S. prosecutors—that it was the victim of extortion and had never received “any actual security services or actual security equipment in exchange for the payments.”

But Chiquita’s complicated relationship with the paramilitaries was never that clear-cut.  The AUC also provided vital security services, including “intelligence on guerrilla movements,” according to one memo.  The paramilitaries used government-sponsored Convivir militias and other front companies to facilitate the illegal payments and to disguise “the real purpose of providing security,” according to Chiquita attorney Robert Thomas. Company officials told Thomas that “all other banana companies” in Santa Marta were making contributions a new company established by the AUC called Inversiones Manglar, and that they “should continue making the payments,” as they did not expect to “get the same level of support from the military.”

In fact, the Chiquita Papers show that the military actually pressured the company to finance the AUC through the Convivir groups and that military officers were often conduits for the illegal payments.  Company officials had “no choice” but to meet with feared AUC chief Carlos Castaño, according to one memo, as “refusing to meet would antagonize the Colombia military, local and state government officials, and Autodefensas.”  Subsequent payments to the AUC were “made at request of Army,” according to company accounting records, and were listed alongside disbursements to “military and police officials” for the purpose of “facilitating payments for security services.”

Of particular interest are numerous payments to units and officers of the Army’s 17th Brigade, which was then under the command of Rito Alejo del Río Rojas, who was forced out of the military in 1999 and is now on trial for murder and ties to illegal paramilitary groups.

Paramilitaries operated with virtual impunity in the parts of Colombia under Del Río’s control, according to previously-declassified U.S. documents, and the AUC worked in direct collaboration with his forces.  One State Department cable said that Del Río’s “systematic arming and equipping of aggressive regional paramilitaries” was “pivotal” to the success of his anti-guerrilla campaign.  Jailed paramilitary chiefs Salvatore Mancuso and Ever Veloza García (“H.H.”) have both fingered Del Río as one of their key collaborators in the Colombian Army.

One handwritten document from the Chiquita Papers recounts a conversation with a Colombian army general—not named in the document, but whose description closely matches Del Río—who had “personally” helped Chiquita with “security” and “information that prevented kidnaps.”  Just a few months after Del Río’s forced retirement, the former general was evidently trying to continue his role as middleman between the company and his allies in the AUC.

The Chiquita Papers also reveal some of the company’s most important political connections during this period.  One of Del Río’s staunchest defenders is former president Álvaro Uribe, who, as governor of Antioquia in the mid-1990s, was an enthusiastic backer of the Convivir groups used to funnel money to the AUC.  A 1995 memo indicates that both Uribe and another politician, Alfonso Nuñez, received substantial donations from another of Chiquita’s Colombian subsidiaries, Compañía Frutera de Sevilla.

For Chiquita, these payoffs to politicians, paramilitaries, and military officers were the “cost of doing business in Colombia,” but it remains to be seen what the true price tag will ultimately be.  The paltry $25 million fine Chiquita paid to settle the Justice Department’s criminal investigation may seem a small amount of money to pay for knowingly financing a foreign terrorist group, but the company now also faces as much as a billion dollars in damages in civil suits brought by victims of guerrilla and AUC violence.

More to the point, there simply is no way to calculate the value of the thousands of lives lost to paramilitary and guerrilla violence financed by the company over some 15 years of operations in Urabá and Santa Marta.

The Chiquita Papers should be a wake-up call for companies eager for an opportunity to set up shop in Colombia’s always-uncertain security landscape, and a reminder that free trade does not come without a price.

Michael Evans is a senior analyst with the National Security Archive. 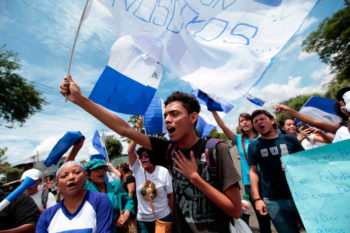