Update from the Americas Program: Guatemala’s Constitutional Court ruled to suspend President Jimmy Morales’ order to expel the head of the International Commission against Impunity in Guatemala (CICIG, by its Spanish initials), Ivan Velasquez. Read our translation of excerpts from the CICIG’s communique:

Aug. 29, 2017: With 3 votes in favor, the president of the Constitutional Court, José Francisco de Mata, announced the decision to grant an injunction to the Human Rights Ombudsman, voiding President Jimmy Morales’ decision to expel Commissioner Ivan Velasquez…  The ruling was in response to the decision of Presidente Morales to declare Commissioner Velásquez “persona non grata”, and order him to leave the country. The CC’s ruling points out that its decision as the highest court should be relayed to the Ministers of Foreign Affairs, National Defense, Government, and the Director of the National Civil Police with the purpose of informing them of the CC’s ruling and so abstain from executing the decision of the President of the Republic of Guatemala.” Voting in favor of the injunction were José Francisco de Mata Vela, Gloria Patricia Porras Escobar and Bonerge Amílcar Mejía Orellana; against: Dina Ochoa Escribá and Neftalí Aldana Herrera. The Court’s decision provides a respite but tensions continue to be high.

From the Guatemalan Human Rights Commission: Protests outside the Guatemalan Presidential Palace began a week ago as rumors circulated that Guatemalan president Jimmy Morales intended to expel the director of the International Commission Against Impunity in Guatemala (CICIG), Colombian national Ivan Velasquez.  Tension picked up last Tuesday when the presidential spokesman confirmed that President Morales intended to visit New York to ask the United Nations Secretary General to remove Velasquez.  Morales began the fruitless trip to the UN headquarters on Thursday, August 24, first stopping in Miami, and then proceeding to the UN headquarters in New York on Friday morning, though it is still unclear with whom he met.

That very afternoon Attorney General Thelma Aldana and CICIG Director Ivan Velasquez announced the first two impeachment proceedings arising from CICIGs ongoing investigation into the funding of the tumultuous 2015 elections that followed the resignation and imprisonment of the president at the time, Otto Perez Molina, and his Vice President, Roxanne Baldetti; the District of Colombia later requested the extradition of Baldetti and the then Minister of Governance on drug trafficking charges.  Thursday’s accusations are against Congressmen Roberto Villate and Orlando Blanco, chairs of the Lider and UNE parties during the 2015 campaign.  Lider and UNE had unsuccessfully challenged Jimmy Morales’ FCN party for the presidency.  Both are accused of receiving unregistered donations.

The next day, Friday afternoon, Aldana and Velasquez announced they seek the impeachment of President Jimmy Morales, who had served as chair of the FCN party during the 2015 campaign, on charges of not reporting over $800,000 in donations.  In May 2016 former military officer Marlon Monroy Meoño, was arrested on drug trafficking charges, and extradited to Florida in November 2016.  Guatemalan newspapers reported he had admitted to giving $400,000 in unregistered cash donations to Morales’ campaign, some reports claim payments were received by Vice President Jafeth Cabrera’s son, and that Cabrera is currently living in a house purchased with cash donations.  President Morales’ son and brother have been in prison since January on charges of receiving payments from a government land registry for over $12,000 in false food and entertainment receipts.

At 6am on Sunday morning President Morales announced he was expelling Ivan Velasquez from Guatemala.  Three constitutional challenges were immediately presented, including one from the government Human Rights Procurators office, and by 11:30am the Constitutional Court ruled the president’s order unconstitutional in a 3 to 2 decision.
Protesters waved Guatemalan flags, danced and chanted “Jimmy goes, Ivan stays.”  Even the threats of violence popping up in social media didn’t dampen spirits; “The Constitution Court is responsible for the violence to come.” Threats centered on the magistrates, though rumors circulated that the FCN planned to send violent counter protesters.

Today, Monday, August 28 a lower court judge should be assigned and within three days should decide if the impeachment will proceed.  The ruling will then go to the Supreme Court, which will also have three days to decide.  If the rulings support the impeachment, the court will ask Congress to form a randomly chosen 5-person committee to review the impeachment; congress has a week to convoke the committee and no time limit in which to decide.

Should Morales be impeached, or resign, Vice President Cabrera will take over his job, yet press reporting indicates Cabrera is implicated in the same crimes as Morales; protesters are also calling for Cabrera’s prosecution.  Should both the President and Vice President be impeached, Congress will choose the successor. 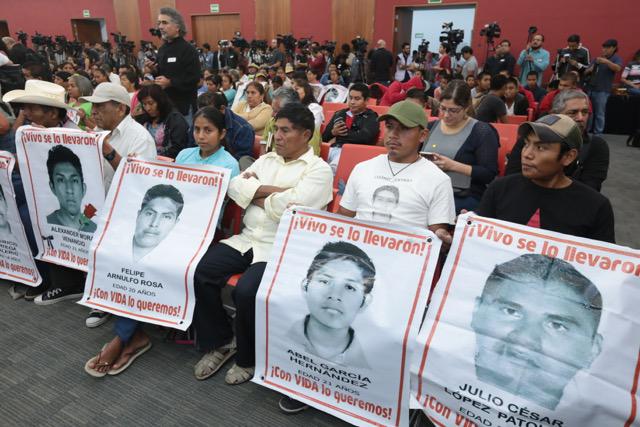 Ayotzinapa’s Message to the World: Organize! 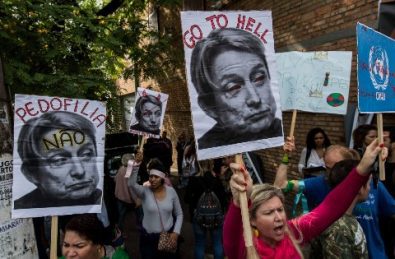