Almost as soon as the results of the United Kingdom’s vote to leave the European Union came out, Latin America felt the impact. Following the Brexit referendum, the Brazilian stock market plummeted, the Argentine peso dropped, Mexican officials slashed the budget and Falkland Islanders began to worry.

The unexpected results (52% to 48%) reverberated around the world and created a phenomenon of the dimensions of the fall of the Berlin Wall.

It was a decision made by old people in England—young people voted overwhelmingly to Remain in the European Union. As the second largest economy in the bloc withdraws, youth are protesting and Scotland and Northern Ireland are threatening independence. With still unpredictable consequences, the global economy doesn’t seem to know what to expect.

A first tentative examination might suggest that Brexit will have little direct effect on Latin America. But despite the fact that trade between the region and the United Kingdom is not significant, from the political and economic point of view, the exit from the European union means a global transformation that will have a major impact on the region.

To begin with, according to a report titled “No more invisible”, nearly 187,000 Latinos live in the United Kingdom.

Of Latin America, Colombia is the country with most at stake. Some 2.5% of its exports (mostly coal) go to the United Kingdom. For Brazil the figure is 1.7% and Mexico 0.65%, according to date of the 2014 Observatory of Economic Complexity. In the midst of the chaos, Mexico’s Secretary of the Treasury, Luis Videgaray, announced a cut of nearly 1.7 billion dollars in the 2016 budget and said that to confront the situation of these characteristics it was necessary to “strengthen the economic fundamentals”. During the dawn of June 24, the day after the vote when the results came out, the Mexican peso dropped to an historic low.

Brexit promoters promised that leaving the EU would open doors for new trade deals. The argument is that without the European bureaucracy the agreements would take place face to face directly in each case.

The EU reached trade and investment agreements with Mexico in 2000, and with Peru and Colombia since 2013. The questions are: will it really make it easier for the United Kingdom to negotiate alone? Will it change the existing trade agreements it already had as part of the EU for Latin American countries?

In the short term, the United Kingdom will have to negotiate the timing of its withdrawal and this will include looking at the trade agreements with Latin America. The foreign ministers of the 27 countries of the EU have already requested of London that since they voted to withdraw it be done quickly. “Don’t play cat and mouse,” stated the Minster of Foreign Relations of Luxemburg, Jean Asselborn.

Argentina is a special case because the economic ramifications are mixed up with the political conflict around the Falkland Islands. In Buenos Aires, the stock market fill to 5% and the peso devalued strongly on Friday June 24. The Argentine market, as others throughout the world, reflected global concerns.

According to the governmental news agency Télam, at the end of May following the visit of the British Minister of Commerce and Investment Mark Ian, Argentina and the United Kingdom evaluated the opportunities for developing business in infrastructure, technology and energy. The attitude in the British Embassy changed since Macri came to power—business leaders began to show more interest than before in investing.

The Macri administration has sought to show itself friendly to business with England, especially with the financial center of London. Now this new scenario of uncertainty is not good news for an economy that is “doing the dirty work” of opening the country up to more international investment, as Treasury Minister Prat Gay announced the day the Brexit results came out, June 24. The “dirty work” includes some highly unpopular measures to generate “confidence” and be re-accepted into global financial circles, such as utility rate hikes of up to 700 %, payment to the hated Vulture Funds, and a major peso devaluation, which before the elections was at 9 and is now up to 15.

The issue of the Falkland Islands has not had the same priority it had under the administration of Cristina Kirchner; however, it is back on the table with the Brexit. As in Gibraltar, where some 96% of the 30,000 inhabitants voted to remain, on the islands the new panorama has ben cause for concern. The 3,000 islanders fear that the European market, which buys 73% of its exports, could close it s doors to their industry, fundamentally fishing that represents 60% of the islands GDP. Also it receives a million euros a year from Europe that, with the exit, it will cease to receive.

Although before the results Defense Minister Michael Fallon promised that British military protection of the islands would continue, the fear is that Argentina changes its attitude regarding the sovereignty of the islands. Sukey Cameron, Falkland representative to the United Kingdom, stated in April in Parliament, “If the UK were no longer a member of the EU, support from many of the member states would be much less certain and this might encourage Argentina to be much more aggressive in their claims.”
Buenos Aires so far has maintained the strategy of asking for dialogue and given no sign of seizing the opportunity as the Spanish government did regarding Gibraltar. On the Thursday of the vote, Argentine Foreign Minister Susana Malcorra made her first speech before the Decolonization Committee of the UN. She stated that negotiations will be State to State, and asked that “the United Kingdom put an end to its unilateral acts in the disputed area”. She was referring to the exploration and exploitation of renewable and non-renewable natural resources. The archipelago is listed as one of the 17 unresolved colonial situations in the world.

Mercosur and the Free Trade Agreement with the European Union
While the changes of government in Argentina and Brazil appear to have paved the way towards the FTA with Mercosur, the UK results now call into question those negotiations. Brazilian Foreign Minister Jose Serra wants to chart a course of creating closer ties with the Pacific Alliance and signing the long-negotiated Free Trade Agreement with the European Union.

“If we negotiate separately with England, as we now will, this will encourage the European Union to negotiate with us,” Serra told O Globo.

But Brazil is experiencing its own shake-up, with an interim government that continues to face storms and an economy that is not in a good position to confront the spending and volatility in international markets caused by the Brexit. This is now just one more factor in its political and economic crises.

From Buenos Aires, Malcorra has taken a similar position to Serra’s. Since Argentina signed on as an observer member with the U.S.-dominated Pacific Alliance. The clear break with the Kirchner government encourages an agreement with the EU.

“It is essential to sign it [the Argentina-EU Free Trade Agreement] in the near term,” the foreign minister declared in April.

With the Brexit results on the table, she raised her concerns at a recent press conference concern.

“The impact of UK departure remains to be seen; we’re still unclear. As for the relationship between the EU and Mercosur, I am convinced that things will move forward and will come to fruition.”

The United Kingdom represented the most liberal sector within the EU, the one that placed fewer obstacles to trade liberalization with other blocks. Unlike France or Poland, which in defense of their agricultural sectors viewed Mercosur with skepticism, the UK pushed the agreements. The new scenario clearly changes the balance of forces within the bloc, and its priorities.

Some sectors in Brazil criticize the alleged obstacles that hinder Mercosur agreements. The interim president, Michel Temer, said on the radio after the Brexit, “Right now we need to re-discuss the Mercosur, not to eliminate it, but to put us in a safer position to seek to expand our relations with other countries”.

Meanwhile, both Montevideo and Asuncion always favored opening up Mercosur, so for them the new scenario is not good news. Tabare Vazquez acknowledged that the Brexit “may complicate the negotiations,” for the FTA.

Latin American migrants
In the last weeks before voting, the polls revealed that the issue of migration was one of the first topics that the British cited when mentioning the reasons for their vote. The media campaign to convince citizens that immigrants were stealing their money worked. Many repeated the statistic that there are 300,000 more Europeans working in England than English who in the European Union. While the information is true, one must take into account that, according to The Economic Journal, between 2001 and 2011 Europeans in the UK contributed 64 percent more to the British tax authorities that they received from state benefits.

Malcorra expressed concern about the anti-migrant sentiment reflected in the Brexit vote. “It appears to be a very strong signal that the world is going through a difficult time, full of fears, of closing off, and with some xenophobic trends, which also can be seen in some signs in the United States.”

The UK never formed part of the Schengen Area–the region that encompasses most of the European countries. It always maintained an independent migration policy from that of the EU. Therefore, Latino immigrants will not see too many changes—immigration policy will remain as restrictive as before. What changes is the situation of European immigrants, who until now could enter the country and work without problems and now will be subject to whatever new rules are made.

The new scenario will surely be one of the major issues at the next Summit of Heads of State expected for mid-July in Uruguay. The other point will have to do with the situation in Venezuela, in the context of the twists and turns in the OAS and the Brazilian president’s threat to boycott the meeting if, as was previously established, Nicolas Maduro assumes the Pro Tempore Presidency of Mercosur. 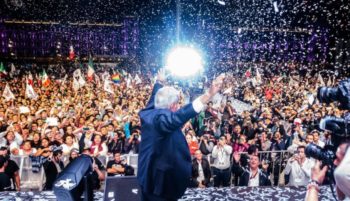