As human rights activists living in Los Angeles, Nansi Cisneros and Karla Castañeda are demanding the Mexican government help them find their missing loved ones. Facing the challenges of searching for them while living in another country, exiled by the violence against women human rights defenders that has become prevalent in Mexico, they organize protests in hopes of garnering support from the Los Angeles community to pressure the Mexican government to address their cases.

While many people in the U.S. remain largely unaware of this human rights crisis, one that has reached more than 26,000 disappeared people since 2006 and has been linked to U.S. security funding, Nansi and Karla are bent on challenging violence in Mexico in order to bring their loved ones back home.

The night Nansi Cisneros found out her younger brother Francisco Javier Cisneros Torres had been taken by armed men from his home in central Mexico two years ago, she drove to the border and boarded the first flight from Tijuana. Nansi, 34, traveled 1,500 miles to her family’s small city of Tala, Jalisco and arrived only a few hours later to her brother’s house, where shell casings and blood still soaked the floor.

Javier and Nansi grew up in L.A. together but in 2007 he was deported and moved to Tala. Javier, a tattoo artist, was disappeared six years later on October 19, 2013. That night, several men in bulletproof vests brandishing shotguns arrived at his home in a white car. They entered his house where he was hanging out with friends and dragged him into their car at gunpoint. Distraught, Nansi’s mother, who lives only six houses down, witnessed everything and tried to run after the car. His family hasn’t seen him since.

Desperate for help, the family approached Tala’s local police who brushed off the case, saying they were overburdened with other investigations. The State Prosecutor’s Office in Jalisco was also unhelpful. Although they opened an investigation regarding his disappearance, it took them two years to share developments in the case with Javier’s family. Last October they informed the family that they had found a body that could be Javier and that testing would be done. However, the case stalled and the family has not received any more updates.

Unfortunately, government inaction is something families of disappeared people know too well. The Mexican government recently denied there was a human rights crisis in the country despite high profile cases like the disappearance of 43 students from Ayotzinapa that provoked global outcry and mass mobilizations. The government has also ignored the recommendations of the United Nations High Commissioner of Human Rights emitted last year that it address the crisis.

Faced with government apathy, Nansi has taken it upon herself find her brother. Nansi has traveled to Mexico to meet fellow activists and has taught herself how to conduct DNA testing, better understand human right laws, and build relationships with families, activists and civil society organizations that also seek justice for disappeared persons.

And in Los Angeles, where Nansi was born and raised, she has built new initiatives to bring together families who are also searching for their disappeared relatives. She has linked up with local activists to organize Bordamos Por La Paz, an artivist gathering that began in Mexico City in 2011 and brings together dozens every second Sunday in L.A.’s MacArthur Park. Since fall 2015, the gathering has brought together families to embroider the names of their missing loved ones in fabric, share updates on cases and honor the disappeared. Through organizing she has met around 15 Mexican families in L.A. who are also searching for missing loved ones.

Nansi has sought the help of the Mexican Consulate, but was told that they only pursue cases of Mexican nationals who go missing in the US.

Still, Nansi plans to continue searching and organizing for Javi both in Mexico and from Los Angeles. When asked if she is afraid to continue traveling to Mexico and organizing for the safe return of her brother Javi, Nansi expresses courage and determination to keep searching. “I have to find Javi, I have no choice. My love for him is more important than life itself.”

The Seven-Year Search for Cinthia

For Karla Castañeda, a mother exiled in the U.S., distance hasn’t weakened her resolve to find her daughter, Cinthia Jocabeth Castañeda Alvarado. Cinthia was disappeared in October 2008 at the age of 13 after she boarded a city bus for downtown Juarez to buy school supplies and exchange a pair of shoes. She was in her first year of middle school.

Originally from Juarez, Karla has searched for Cinthia for over seven years, staging protests outside of the Chihuahua state prosecutor’s office and even participating in a 400-kilometer march from Juarez to Chihuahua City through the cold Chihuahua desert. During the march known as the “Walk for Life and Justice” organized in 2013, Karla marched 30 hours to hold a public hearing to ask the state governor Cesar Duarte to address the disappearance of women in the state and to act to resolve Cinthia’s case.

Governor Duarte wasn’t in the capital to receive her. However, after the march, Karla began to face backlash that eventually forced her into exile. Authorities, including the local, municipal and state police attempted to raid her home three times. These break-ins, coupled with threatening phone calls prompted Karla to seek exile in the U.S.

On February 13, 2013 she fled Juarez with her other four children and was granted political asylum in San Ysidro, California, after using documents and photographs as the required proof that she had a credible fear of persecution in Mexico. Karla has since been in exile in Los Angeles.

Though Karla says she feels remorse for being so far away from her daughter, she hasn’t ceased her search for Cinthia. In L.A., Karla has received the help of local activists and community members. Last year alone, she participated in actions like the International Women’s March, marches commemorating the missing 43 students of Ayotzinapa, Justice for my Sister’s #16DaysofActivism initiative. She also led two hunger strikes in front of the Mexican Consulate.

In her most recent hunger strike, organized last October, Karla stood in front of the Mexican Consulate to remember her daughter on her 20th birthday. She fasted for days outside of the building to pressure the Mexican government to give answers in the case. So far Mexican officials in Los Angeles have been unresponsive to Karla’s demand for answers.

Officially, Cinthia remains missing and is listed on the web page of the state prosecutor’s office dedicated to missing women and children.  Karla is also still waiting to hear a final decision on her asylum petition sometime this year to determine whether she can stay in the U.S.

Both Nansi and Karla plan to continue their search from Los Angeles, counting on the support of activists like Xalli Mejia.

Xalli, born in Jalapa, Veracruz, has been at Karla’s side for both hunger strikes and has given her airtime on her KPFK feminist radio show to share her story with listeners. A seasoned activist involved in the #YoSoy132 and Ayotzinapa protests, Xalli thinks the protests both women have organized in L.A. are important for creating international awareness and holding the Mexican government accountable for its human rights abuses. In addition to creating bad press for the government, Xalli says these protests also work to promote a cross-border movement for justice.

“Our families in Mexico are counting on us to organize while abroad. Some of us are in exile not because we want to be, but because we were forced to abandon Mexico due to the lack of opportunities or because of threats against our lives and families,” says Xalli.

Both Karla and Nansi continue participating in protests in Los Angeles. Karla recently joined the March 6 International Women’s Day march organized by AF3IRM, a transnational feminist organization for women of color. Meanwhile, Nansi plans to continue hosting the Bordamos Por La Paz reunions and recently organized it during the cycling event CicLAvia in the San Fernando Valley during March 6.

In an interview during the first few months of her exile in L.A., Karla seemed intrepid despite her long journey from Juarez. “If I stay, great. If I leave, that’s also okay. I will continue to look for my daughter.”

Nidia Bautista is a freelance journalist based in Mexico City. She’s a regular contributor to CIP Americas Program, americas.org. 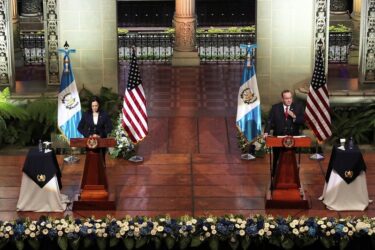 In Guatemala, Harris Should Address U.S. Policies That Put Corporations Over People