At around five in the afternoon on Dec.15 in the city of Iguala, Guerrero, a Peoples’ Political Trial was held to try the city council members of Iguala and and other city officials of the government of former mayor, José Luis Abarca. The trial arose from the Sept. 26-27 attacks on five busloads of students from the nearby Ayotzinapa Rural Teachers’ College, carried out by local police and allegedly ordered by the mayor.

The unprecedented proceedings were carried out in the remains of the facilities of the Municipal Palace, which was burned by protesters on Oct. 21[1]. Only two of the public officials accused attended in their own defense–the interim mayor of Iguala, Silvano Mendiola Pérez and the PRI legislator, Marina Hernandez de la Garza.

The event was organized by the Coalition of Organizations and Citizens of Iguala, composed of the Citizens’ Council for Justice and Peace, The Iguala Front for Dignity, the Coordinator of Education Workers of Guerrero, and the Organization Genaro Vazquez, among others. Also present was Julian Lebarón, promoter of the National Citizens’ Congress.

Lebarón noted that Article 39 of the Mexican Constitution provides the legal basis [for this proceeding], saying that “…It is the (our) inalienable right to change our form of government if it is not serving us and our leadership if it is not functioning. And as we see in the entire country, the leadership is totally rotted.”

He proposed that based on this legal right the people can exercise their own leadership. “We need the power to sack government officials who don’t serve [us]; to fire those public servants who don’t do their jobs.”

Lebarón said that he does not believe that those who hold public office will provide the necessary tools for the people to remove them from office, but the Popular Political Trial to be held could have a nationwide impact.

“We have to accept responsibility for the fact that are social consequences for those acting in a destructive manner and who, in addition, are paid by us as public servants.” During his speech, Lebarón frequently mentioned the achievements of the Purépecha community in Cheran, Michoacan.

Three citizen attorneys read the list of accusations and the approximately 200 people present sentenced or pardoned the public officials by holding up a red or green card. The accused were invited to come or to send a representative to defend them. Only city official Marina Hernandez attended, along with Mendiola, the interim mayor. Mendiola was loudly criticized by those present and defended by someone who took the stage to point out that Mendiola should not be tried because he was not acting mayor at the time of the crimes.

The officials were indicted for their responsibility for crimes while on the job. Obviously, the murder and forced disappearance of the students of Ayotzinapa dominated the list of grievances. Among the officials on trial and not present were Juana Álvarez Martínez, Enrique Marroquín Pineda, Leonel Vallejos, Nicolás Guerrero González, Lorea Esther Vargas, Martha Gregorio Rojas Lagunas and Sandra Luz Mota Rojas.

Questioning by the citizen attorneys, was detailed: What did the city councilors do, why did they not speak up about the crime, were they quiet, why did they close ranks [around the former mayor] until the last minute when he requested a leave of absence, etc.

The only functionary who came to defend herself in the People´s Political Trial, Hernández de la Garza, indicated that she often worked alone and she accepted some possible failures of the council and emphasized the joint responsibility of the people of Iguala. “I didn’t vote for José Luis Abarca,” said the councilwoman. She continued, “And you should know that many of you who now are talking, indeed voted for him.”

In concluding her defense she made a plea for a responsible vote in the next elections. “… Now when you go to choose your next governing officials, put people [in office] who really want what’s best for c Iguala, regardless of what party they’re from, and if there are citizens you can put forward [as candidates], great, have them stand up and fight for office and I hope they win,” Hernandez de la Garza concluded.

When the participants shouted their rejection of the PRI, the councilwoman of that party answered, “Too bad, if you don’t like the proposed candidate, vote for a citizen, but a citizen who answers to you. If that citizen truly represents you, I myself will come to endorse him.” At the close of her defense, the jurors, that is to say those who came to the event, found Hernandez de la Garza exempt from responsibility and pronounced the rest of the members of the council guilty as charged.

To conclude the event, effigies with photographs of the council members were set on fire and the ashes thrown on the building in which they currently carry out functions. The organizers requested that the officials resign and Lebarón invited the citizens to make it known to the guilty officials that they were no longer wanted.

Debora Poo is a freelance journalist and photographer working in Guerrero and a regular contributor to the CIP Americas Program www.americas.org 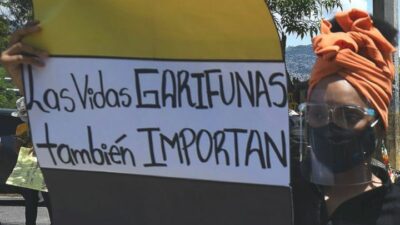