From July 25 to August 2 of this year, hundreds of Central American migrants, their family members, and activists participated in the Caravan “Step by Step for Peace” to demand respect for immigrant rights.  Part I (here) of this article details the goals of the Caravan, especially its protest of the kidnappings of migrants who cross Mexico. Part 2, presented below, chronicles the travels by freight train across Mexico.

Thousands of Central American migrants cross Mexico by freight train to escape checkpoints. Traveling on top or on the sides of the train involves a journey of days or weeks in the extreme sun. Migrants are vulnerable to injury, assault and other abuses. On our second day in Chiapas–Wednesday July 26–we followed “The Beast,” the name migrants give to the freight train from sun up to sun down.

In the morning, we walked along the train tracks in the city of Arriaga where the train was stationed, preparing to begin its journey north. Some members of the Caravan climbed up the train, tied their banners to it, and stood atop waving flags. A group of women remained in the shadow below the train, holding up their posters with the names and photos of the disappeared.

We continued walking, but we passed at least a hundred migrants already atop the train, staking out their places and waiting for the train to begin its twelve-hour journey to Ixtepec, Oaxaca. The women of the caravan called out to the migrants, reminding them to be careful and to call their mothers. Many tossed up water and food they were carrying so that the migrants would have at least something for their long journey with temperatures over 90 degrees Fahrenheit.

At noon that day, from the isolated corner of Arriaga’s cemetery where many migrants are buried in unmarked graves, we heard the train leaving town. In the distance, through the trees and brush and under the strong mid-day sun, we could see the train leaving with the migrants atop. From the cemetery, mothers, sons, and others wondered if perhaps their loved ones were buried there and also thought of their relatives riding in the extreme heat atop the train.

We reached the migrants’ shelter in Ixtepec, Oaxaca in the late afternoon, a trip that took us less than three hours on the bus.  That evening in the municipal auditorium of Ixtepec, we watched Pedro Ultreras’s new film “The Beast,” which documents the dangerous journey that Central American migrants take aboard the freight train to cross Mexico.

The train arrived in Ixtepec at close to 1 a.m. We walked to the train tracks, visible from the shelter, to receive the migrants. We were accompanied by a group of journalists and Interamerican Commission Special Rapporteur Felipe González, who was at the shelter for a meeting. As the train slowed down and stopped briefly, hundreds of migrants got off. This was the same group we had passed on the train that morning.

Most walked back with us to spend the night in the shelter. Several women of the Caravan cooked for the migrants in the shelter’s kitchen and washed dishes into the morning. No one slept much, and the women reflected on the suffering their sons, daughters, and other family members had endured in crossing Mexico.

The next day as members of the Caravan discussed what to write on their protest banner, a mother talked about what she felt when she saw the film.

“It was very emotional and it was something that caused pain in our hearts, to see how many migrants endure suffering.” This woman from El Salvador was searching for her son who disappeared twenty years ago. She demanded that “the government of the United States and the government here in Mexico sit down at a table and dialogue about this problem and provide a solution to the loss of loved ones. We are in this fight to reach a solution from our presidents. It is not just that they have other tasks that are more important than addressing the suffering of mothers.”

Our group followed alonside The Beast, but the Caravan participants leaving from Tenosique, Tabasco actually rode the train. Elvira Arellano, who several years ago after receiving a deportation order sought sanctuary in a Methodist church in Chicago before she was deported, led the march along with Rubén Figueroa, a Mexican human rights activist, and Father Tomás Gonzalez. Father Gonzalez, affectionately known as “Fray Tormenta” (Storm) for stirring things up wherever he goes, is director of a shelter for migrants in Tenosique.

The caravan members rode the train from Tenosique to Coatzacoalcos with the sun beating down for two full days and a night. They asked for water in the countryside, from the people they met along the way, at times drinking only unclean water when nothing else was available. At one stop, they carried a  banner through the streets of Coatzacoalcos that proclaimed, “I’m searching for a dream, don’t kidnap me.” Commitment to Non-Violence and a New Model of Security

The Caravan was focused on immigrant rights, yet the event also addressed the critical need for a new approach to security, one that protects the human rights of all. The Caravan’s webpage carries the motto “Peace is the Fruit of Justice” which “reflects what is at the base of the work done by all those involved in the protection of the human rights of our migrant brothers. We reaffirm that peace, as a social project, comes from the fair implementation of justice, and requires the participation of civil society, so that it can generate a new national agreement. Peace, understood in this way, requires an absolute end to the impunity, collusion, and the simple failure of the government to act.”

The Caravan share this commitment to nonviolence with Mexico’s Movement for Peace with Justice and Dignity, led by Javier Sicilia. Both reject President Calderon’s militaristic war on drug trafficking and demand a shift of focus toward providing economic and social opportunities for youth so that they will neither join, nor become victims of drug cartels. The peace movement and the migrants’ Caravan demand an end to corruption that allows violence and human rights abuses to increase. Sicilia joined the Caravan in Mexico City and asked forgiveness “in the name of our state” for the mistreatment the migrants had suffered.

In a mass celebrated under a highway bridge in Coatzacoalcos in front of the train tracks, Father Alejandro Solalinde (director of the Ixtepec Shelter) and Father Tomás Gonzalez knelt to ask forgiveness from the Zetas, one of Mexico’s most ruthless drug cartels. They stated that the cartel members are “victims of a sick society that didn’t know how to give them values.”

The call for forgiveness cannot be taken as a justification of the brutal crimes committed by the Zetas or as a denial of the obligation of the Mexican state to investigate kidnappings and to hold accountable those who are responsible. Yet the call underscores an analysis that denounces the structural nature of the violence in contemporary Mexico and emphasizes that society has failed to offer sufficient opportunity to its youth. Members of the caravan affirmed that deep political and economic changes are necessary and that continued militarization will lead only to an increase in violence.

The Caravan’s Successes and the Road Ahead

Caravan participants viewed their efforts as a success for several reasons. Several mothers on the journey found their missing children. On the Caravan’s first day in Mexico, in the city of Tapachula, one Honduran woman was publicly reunited with her son whom she had not seen for nine years. She tearfully received him at a press conference in the city’s central plaza, giving thanks to God for “this miracle” amid great applause. Another mother, also from Honduras, located her daughter who was living in central Mexico with the assistance of news media.

Throughout their journey migrants and their families spoke to the public and to the press, raising awareness about the kidnappings and other forms of violence migrants face. Migrants and family members presented their testimonies to Rapporteur Felipe González in Tierra Blanca. The Rapporteur’s preliminary observations of his visit, released on August 2, incorporate voices from the caravan. The observations emphasize the grave insecurity faced by migrants and the “forced disappearances, assassinations, sexual exploitation, kidnappings, and discrimination, among other violations of their rights.” The Rapporteur makes note of the involvement of Mexican authorities in cases of abuse and calls on the Mexican state to investigate. He also notes that many of the victims and their family members had not denounced the abuses to authorities out of fear of reprisals.

Yet there is still a great deal that remains to be done in defense of immigrant rights. Just a week after the Caravan reached Mexico City, Julio Fernando Cardona, a 19 year-old indigenous man from Guatemala, was killed near the train tracks in Tultitlán in the state of Mexico. Cardona had joined the Caravan in search of his disappeared brother. According to one witness, he was taken in by municipal police before his body was found.

The Caravan lasted little more than a week and took place during a crucial moment in Mexico’s discussions of national security. Earlier this year Congress passed legislative reforms regarding immigration law that could mean significant positive reforms for Central American migrants. Yet the rules and regulations to implement the law have yet to be written.

Meanwhile, thousands of migrants have been kidnapped and each day hundreds more attempt to make the journey across Mexico. More than ten years after the passage of the North American Free Trade Agreement, with many promises of economic integration still unmet, the distance between Mexico and the U.S. has increased for migrants. There are limited opportunities for poor Central American workers to obtain legal passage to the United States.

The criminalization of poor workers has escalated with the post-September 11 national security model. Although the kidnappings are usually linked to members of criminal groups, the governments of the United States, Mexico, and Central America must also recognize their role in creating the circumstances under which these crimes prosper. The Caravan demanded an end to the kidnappings. How many more migrants will disappear or be killed by policy before policymakers take responsibility for protecting the rights of all? In the search for loved ones, family members keep alive the memory of the disappeared as they demand accountability from government authorities and respect for the human rights of all migrants.

Christine Kovic is Associate Professor of Anthropology at the University of Houston-Clear Lake. She has conducted research on human rights in Chiapas, Mexico for nearly two decades. She writes on immigration and human rights for the Americas Program www.americas.org.

The Caravan Step by Step Toward Peace 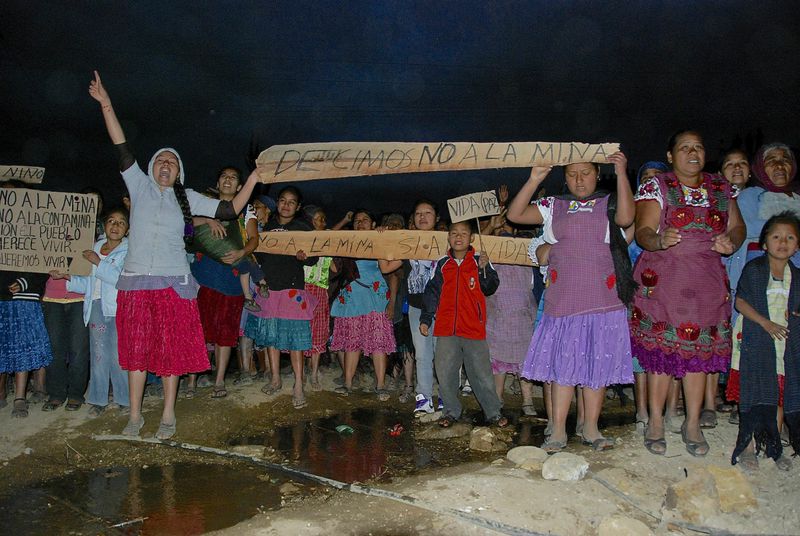 Colombia’s Elections: Under the Gun