The Americas Program is committed to fostering strategic dialogue and reflection among civil society actors engaged in Latin American and Caribbean issues. To that end, we have produced these Strategic Dialogues that summarize different views about pressing hemispheric issues. We welcome your feedback and comments, which will be posted to our website www.americas.org and circulated in our Spanish and English ezines. Please have your opinion heard in our comments section below.

The Americas Program has published numerous critiques of the U.S. embargo on Cuba, as well as articles reviewing general U.S. policy towards Cuba. Contributors to the program will carry on and deepen such critiques.

In the interests of sparking strategic dialogue and thinking about the future of U.S.-Cuba relations, we offer several summaries of recent essays and reports, followed by specific points of discussion.

The Embargo is Obsolete

Critics of U.S. policy on Cuba say the U.S. government is living in the past and has yet to shake its Cold War-mentality with regards to the embargo and Cuban policy on the whole. As Wayne Smith indicates, “Early on, there may have been some logic to US efforts to isolate Cuba and bring down its government – at a time, that is, when Fidel Castro was trying to overthrow the leaders of various other Latin American states and moving into a relationship with the Soviet Union, one that led to the missile crisis in 1962. But all that is now ancient history. Castro has built normal, peaceful diplomatic relations in the region, while any threat posed by the so-called Cuban-Soviet alliance ended with the demise of the Soviet Union more than a decade ago.”

After 46 years of failure, we must change course on Cuba

Many proponents of the embargo say that removing it will give carte blanche to other authoritarian regimes and will be a slap in the face for human rights and democracy advocates. “Lifting the embargo won’t normalize relations, but instead legitimize — and wave the white flag to — Fidel’s 50-year fight against the Yanquis, further lionizing the dictator and encouraging the Latin American Left. Because the economy is nationalized, trade will pour plenty of cash into the Cuban national coffers — allowing Havana to suppress dissent at home and bolster its communist agenda abroad. The last thing we should do is to fill the pockets of a regime that’ll use those profits to keep a jackboot on the neck of the Cuban people. The political and human-rights situation in Cuba is grim enough already.”

The Embargo has been a Failure

Many of the Castro government’s most ardent critics recognize that the embargo has not worked and it is time to rethink U.S. policy on Cuba. “After 47 years, the unilateral embargo on Cuba has failed to achieve its stated purpose of ‘bringing democracy to the Cuban people,’ while it may have been used as a foil by the regime to demand further sacrifices from Cuba’s impoverished population. The current U.S. policy has many passionate defenders, and their criticism of the Castro regime is justified. Nevertheless, we must recognize the ineffectiveness of our current policy and deal with the Cuban regime in a way that enhances U.S. interests.”

Ending the Embargo would not benefit Cuban or U.S. Citizens

While many argue that the U.S. economy could benefit from trade with Cuba, Gordon C. Chang disputes this notion. “Even if we lift the embargo, Castro’s successors will not allow their economy to be overrun by American tourists, investors, and corporate executives. Fidel’s legitimacy, we should remember, is largely founded on his ridding the island of foreign exploiters and his creating home-grown socialism. Cuban leaders, in any event, would allow only enough commerce to maintain their regime, just as North Korea’s Kim Jong Il is doing today. It is a Fukuyama-induced fantasy to think that history has ended and that we can rid ourselves of despicable autocrats with just letters of credit and bills of lading. The Castro boys, Fidel and successor Raul, have survived just about everything during five decades and are not about to surrender to globalization. An embargo helped kill communism in Europe, and it can also end it in the Caribbean.”

In Defense of the Cuban Embargo

The Embargo has helped the Castro Government

Some believe the Cuban government has been aided by the continuation of the embargo. “I think that the embargo in fact has helped the Castro government stay in power because we prevented the Cuban people or helped prevent the Cuban people from getting information that they need. We’ve been unable to trade with them, so they’ve been more dependent on the government. But I think what really matters now is that the Cuban government has learned to live without us. And we almost have no influence in Cuba anymore. And when there is a change from Raul, we’re not going to have any say whatsoever.”

Weighing the Embargo against Cuba

The Embargo is the U.S. Government’s only Negotiation Tool

There are those who believe that the U.S. government must not end the embargo without receiving anything in return—freedom of political prisoners, a freer press, elections, etc. For them, the embargo is the U.S. government’s “trump card” and by playing it, the U.S. loses the ability to provoke a transition to democracy in Cuba. As Carlos Alberto Montaner sees it, “The United States and Latin America must not be content with allowing a communist dictatorship to remain in Cuba, even if Castro’s heirs promise to be homely jailers. If U.S. diplomacy learned anything in the 20th century, it was that the only guarantee for a peaceful neighborhood devoted to the people’s well-being through the exercise of commerce exists when countries practice democracy and respect for human rights…The key is to induce the establishment of democracy in Cuba. For that it is necessary to keep intact the capacity to negotiate”

The Embargo has Isolated the U.S. from its Allies

The U.S. is the only country to place an embargo on Cuba, a move that has been criticized from various quarters. Daniel Griswold of the CATO institute points out that, “As a foreign-policy tool, the law perversely punishes, not the Castro regime itself, but some of our closest commercial allies such as Canada and the European Union.” Indeed, in 2003 the U.N. passed a resolution called “Necessity of ending the economic, commercial and financial embargo imposed by the United States of America against Cuba: Resolution adopted by the General Assembly”.

Four Decades of Failure: The U.S. Embargo against Cuba

Necessity of ending the economic, commercial and financial embargo imposed by the United States of America against Cuba.

Has the embargo been effective in pressuring the Cuban government? Should it be continued?

How has the Cuba embargo affected U.S. relations with its allies, particularly in the Western Hemisphere?

What alternative diplomatic tools could the U.S. government use to achieve democracy in Cuba?

What, if anything, should the U.S. government receive in return for ending the embargo?

Is the embargo the U.S.’s only “trump card”?

Michael Collins (michael.americas(a)gmail.com) is the Program Associate for the Americas Program of the Center for International Policy

The Case of the Cuban Five: American Justice as a Political Weapon 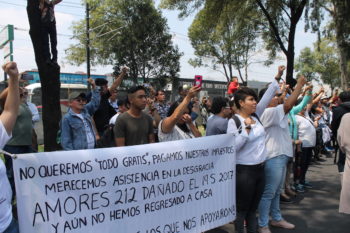 “The Emergency Isn’t Over”, the Homeless Commemorate a Year Since the Mexico City Earthquake