La Realidad.  Subcomandante Marcos no longer exists. The Zapatistas resolved to destroy him, just as they decided to create him during the January 1994 uprising.

In these 20 years, the Zapatista National Liberation Army (EZLN) has undergone profound internal changes and no longer has a need for the persona called “Marcos”—a costume, he says—”a distraction” used to defy modernity in one of its strongholds: the media.

“Those who loved and hated Subcomandante Marcos now know that they hated and loved a hologram. Their love and hatred has been, well, useless, sterile, empty, holes.”

Subcomandante Marcos himself made that declaration May 25 before 2,200 Zapatistas, independent media invited by the leader and some 800 adherents of the “S ixta” [Sixth Declaration of the Lacandon Jungle]–EZLN supporters who arrived by caravan from throughout Mexico. Reunited on the basketball court in La Realidad, seat of the autonomous Zapatista government deep in the Lacandon jungle, they awaited his appearance under a light, nocturnal rain.

With his horse and pipe, Marcos had already appeared unexpectedly that morning, along with the men and women of the General Command of the Zapatista National Liberation Army. The occasion was a ceremony honoring José Luis Solís López, Better known as Galeano,  an EZLN teacher in the Zapatista “Little School”, a sergeant,  videoconference speaker, autonomous advisor, and candidate for membership in the Good Government Council [Junta de Buen Gobierno]. Galeano was assassinated May 2, during an attack on the same Caracol of La Realidad by members of the National Action Party, the Green Party of Mexico (PVEM)—the group of Manuel Velasco Coello, governor of Chiapas—and the CIDAC-H [Central Independiente de Obreros Agrícolas and Campesinos Histórica], an organization the Zapatistas describe as paramilitary that had previously attacked EZLN bases. The events sparked a global solidarity campaign that organized homages to Galeano in many areas of Mexico and throughout the world from May 18 to 24.

“We search for justice, not vengeance. The paramilitaries are poor people who have been manipulated and deceived by projects offered to them by the bad government,” pointed out Subcomandante Insurgente Moisés, during his speech to the EZLN base and adherents of the Sixta who came together to celebrate the life of Galeano. “Our rage is against capitalism, not against those who have been deceived by it. We are here to bear witness and investigate the facts. The arrests by the government of Chiapas should not be used to calm our rage. They are a distraction, not justice, carried out to stifle the protests carried out by supporters in the Sixta,” insisted Subcomandante Moisés.

The indigenous leader pointed to President Enrique Peña Nieto and Chiapas Governor Manuel Velasco Coello, in addition to Florinda Santis, PAN leader in Las Margaritas (the “official” name of the municipality where the Caracol de La Realidad is located), Luis H. Alvarez, Commissioner for Peace in Chiapas, and Carmelino Díaz López as the ones responsible for the assassination. Subcomandante Moisés accompanied Marcos while the latter delivered an emotional reading of his communique early Sunday morning before a silent and shocked audience. The Subcomandante spoke about a type of racism on the self-proclaimed revolutionary left, which in the first days of the indigenous uprising was fixated on him because he was mestizo. It created a cult of the individual and the ladino vanguard that, according to the EZLN leader, should no longer exist in a movement that believes in power from below and in “leading by obeying,” and whose leadership has gone from mestizo to indigenous.

“We have not deceived anyone at the grassroots. We don’t hide that we are an army with a hierarchical structure, a central command and top to bottom decisions,” admitted Marcos from the central stage at the Caracol de La Realidad. “We don’t deny our true identity to ingratiate ourselves or to be fashionable. It is our belief and practice that to rebel and struggle neither leaders, nor caudillos, nor Messiahs, nor saviors are necessary. To fight, all that is necessary is a little bit of conviction, a lot of dignity, and a lot of  organization.”

And that’s how one of the major social leaders of the last half of the last century left the stage, with the humility and irony that has characterized his letters, communiques, stories, public appearances and disappearances. After 20 years, the romantic and rebellious persona created by the media myth decided to disappear with an announcem ent to the non-commercial media and to his people, incredulous and obviously moved.

“Therefore, there won’t be any museum or metal plaques where I was born and grew up,” assured Marcos. “Nor will there be anyone who lives from having been Subcomandante Marcos. No one will inherit his name or position. There will be no all-expenses-paid transfers to first-class hospitals.  Nor will there be widows or heirs, funerals, honors, statues, museums, prizes, nor anything that the system does to promote the cult of the individual and downplay the importance of the collective.”

Around the stage of La Realidad, people applauded and raised banners; some cried. Marcos left his place to the collective, to the men and women of the EZLN who on December 21, 2012, marched silently in San Cristóbal de Las Casas, stepping up to the platform one by one, with fists raised, to emphasize the centrality of each individual in the struggle.

“We think it is necessary for one of us to die so that Galeano can live,” writes the Subcomandante. “Therefore, we have decided that as of today, Marcos no longer exists. And, in the end, those who understand will know that someone who never was is not going away, and someone who never lived is not dying.” Orsetta Bellani (@sobreamerica) is a member of the Free Media Network in the Caravan-Chiapas [La Red de Medios Libres en la Caravana-Chiapas] and is a journalist covering Latin America. She writes for, among other publications, the bulletin of the Americas Program www.americas.org/es

The Audacity of Free Trade Agreements 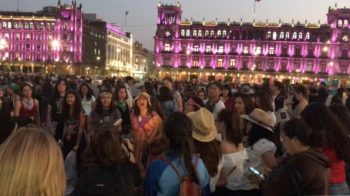