The United States’ long history of intervening in Haitian politics is alive and well: President Obama’s administration is attempting to derail the lawful return of former President Jean-Bertrand Aristide before Sunday’s controversial run-off elections. In response to Aristide’s planned return, likely Thursday evening or Friday morning, State Department spokesperson Mark Toner said, “former President Aristide has chosen to remain outside of Haiti for seven years. To return this week could only be seen as a conscious choice to impact Haiti’s elections. We would urge former President Aristide to delay his return until after the electoral process has concluded, to permit the Haitian people to cast their ballots in a peaceful atmosphere. Return prior to the election may potentially be destabilizing to the political process.”

The statement overlooks the fact that Aristide has been in exile in South Africa the past seven years after being forcibly removed from his country following a U.S.-supported coup.  Aristide left Haiti on Feb. 29, 2004 on board a US Government airplane as rebel forces approached the capital of Port-au-Prince. On numerous occasions, most recently after the January 2010 earthquake, he has tried to return only to be frustrated by Washington’s string pulling.

South Africa, Aristide’s home for most of his exile, has been under intense pressure to prevent the immensely popular former president from leaving the country. President Obama called South African President Jacob Zuma personally on Tuesday and expressed his “deep concerns” about Aristide’s return. According to the Miami Herald, Obama’s call, as well as a call from UN Secretary General Ban Ki-moon, did not change the South African government’s decision to not interfere with Aristide’s return.

In response to these U.S. efforts, over 100 U.S. lawyers, law professors and law students recently signed on to a letter to Department of State Chief of Staff Cheryl Mills demanding that the United States respect Aristide’s legal and human right to return to his country. According to the letter, Haiti’s constitution and the Inter­na­tional Covenant on Civil and Polit­i­cal Rights, binding for both Haiti and the United States, both affirm Aristide’s right to return. The ICCPR states that, “no one shall be arbi­trar­ily deprived of the right to enter his own country.”

Also, because the U.S. government is openly trying to prevent Aristide from participating in his own country’s political process, the letter’s signatories state that the Department of State is violating “[Aristide’s] polit­i­cal rights, includ­ing his right to free expression, free­dom of association, and free­dom to take part in the con­duct of pub­lic affairs.” In its concluding paragraphs, the letter notes, “it is espe­cially dis­turb­ing to see such dis­re­spect for internationally-accepted human rights from a Depart­ment that has made human rights an impor­tant part of its for­eign pol­icy.”

The backdrop for this Machiavellian maneuvering is the widely condemned run-off elections this Sunday in a country trying to recover from the Jan. 12, 2010 earthquake which claimed over 300,000 lives. The first round of elections, held Nov. 28 of last year, were called into question because of widespread irregularities, but also due to the historically low turnout: according to the Center for Economic and Policy Research, the 27 percent of Haitian voters that turned out constituted the lowest level of participation in a presidential election in the Western hemisphere in 60 years. The CEPR’s analysis also noted widespread vote-counting irregularities, dubious statistical methodology, and the pre-election exclusion of numerous political parties, including the country’s most popular political party, Aristide’s Fanmi Lavalas.

The election, held under the auspices of the Organization of American States (OAS) and Haiti’s Provisional Electoral Council (CEP), resulted in this Sunday’s run-off between conservative candidates Mirlande Manigat and musician Michel “Sweet Micky” Martelly. The CEP, under significant international pressure and after questionable vote-tallying, changed its preliminary numbers and removed the ruling party’s candidate Jude Celestin from the contest.

“They should really start all over again,” said Nicole Phillips, staff attorney with the Institute for Justice and & Democracy in Haiti. The IJDH and other organizations are calling for new elections and a boycott of Sunday’s runoff because of widespread voter disenfranchisement, the unconstitutional formation of the CEP, and the CEP’s failure to approve the first round’s results with an absolute majority. A new round of elections, Phillips said, would cost just $29 million, a fraction of cost of the UN stabilization operation.

According to Phillips, U.S. and Western meddling in the Haitian elections and the steadfast opposition to Aristide’s return are best explained by their desire to have Haiti run by malleable politicians open to corporate interests and deaf the popular will.

“In the wings there are billions of dollars of reconstruction money to build back Haiti better than ever and none of that can happen until there is a stable government that’s willing to work with the U.S. government and international actors on getting development projects,” she said. “I think when you read between the lines there, what that means is they want someone in office who doesn’t mind business as usual, with investments in the private sector of Haiti so that it can go to U.S. corporate interests as opposed to the public sector, going to hospitals and schools and things that President Aristide’s government had tried to invest in.

“The two candidates right now, Michel Martelly and Mirlande Manigat, are very conservative and are definitely open for business in Haiti.”

The risk of going forward with the elections, Phillips said, is that the resulting government will come to power without popular legitimacy and at a pivotal moment in Haiti’s history. Major problems of gender-based violence, just relocation of earthquake victims, adequate provision of basic services and massive reconstruction will have to be addressed by the next administration, and a government more beholden to corporate interests than to the public interest will likely fail to do so satisfactorily.

“One-third of the population of Port-au-Prince is still living in IDP (internally displaced person) camps, they’re going without food,” she said. “50 percent of our families had at least one of their children go an entire day without eating the previous week.”

Phillips cited the medical journal Lancet’s recent article that estimated that more than 11,000 people are likely to die of cholera and that 800,000 more are likely to contract the disease in the coming year. “The people are really struggling here and they’ve completely lost hope in their government. There’s no faith whatsoever in government and that’s the problem. When you don’t have a legitimate, democratic election process you rob people of that ability.”

According to Phillips, Haitian citizens’ best means to reflect their will is to not vote in Sunday’s elections. “The only power that an individual Haitian over 18-years-old has right now is to not vote. Not going to the elections is the signal that they don’t want to support this process, that they want a different political process. Haitians love voting, Haitians want a democracy that rivals that of the United States. They don’t think they deserve a different democracy than what the U.S. or Canada has, they want the same one and they understand fraudulent elections when they see them.” She noted that the record low voter turnout was a sign of disenfranchisement, but also a result of an organized boycott of the elections.

The Obama administration’s attempts to block former President Aristide’s return and interfere with Haiti’s electoral process are a stark reminder that Western designs for Haiti have little to do with what the population wants or needs. Aristide’s return and fair elections represent the will of the vast majority of Haitian people, and that’s why they’re both being fought tooth and nail. To claim that meaningful elections can take place without the participation of the most popular political party, Fanmi Lavalas, or with the continued exile of the country’s most popular politician is an act of willful delusion or shameless deception.

“There’s a lot of work that needs to be done by the new government that’s going to take over,” Phillips said. “Who comes to office really needs to reflect the will of the people, and this process has not ensured that. If you’re going to rebuild Haiti, you need to start with a legitimate government.” 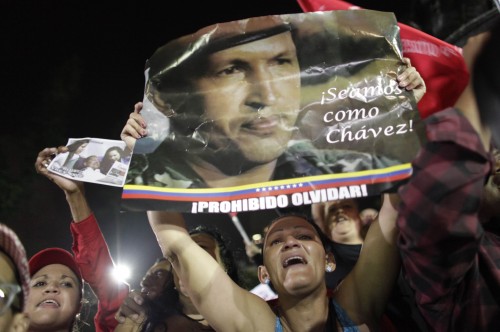