July 2nd is a historic day for social media in Mexico. A youth group broadcasted live from the meeting of the United Committees of the Mexican Senate., exercising our right to communication, which is currently threatened.

We used a “free antenna”–the use of a radio spectrum without concession–on 102.1-FM. The team’s entrance into the meetingplace and much of what we did that day was the result of a risky strategy, which took many days of preparation. Since entry to the legislative building is under close watch and was reinforced that day, we had to use an improvised tactic that could have come out of an action movie to gain access.

Those of us who asserted our right to communication that day want to point out two major points: First, that rights are not negotiable and that they exist through using them. Community radio stations are grassroots projects that will continue to exist regardless of the legislation, but we want to fight for the best conditions for transmitting.

Second, it is frightening that neither legislators nor their advisors nor security personnel nor other journalists realized the transmission equipment had been brought in until it was obvious that we were transmitting. That speaks of the utter lack of knowledge about the most basic technical aspects of radio communication; in other words, representatives are legislating on matters they know nothing about.

The Pact for Mexico that led to the push for reforms, including the current telecommunications reform, was drawn up among a small group of the political elite. It is a discretionary and undemocratic agreement. The structural reforms that it has opened the door to have been pushed through behind the backs of the the citizenry. The day of our protest, we asked for time to read our document as a citizen perspective. We were denied permission.We took it as the last legitimate resource, and demanded a public debate.

The response was violence to silence us, excessive and scandalous violence. So we experienced that day what so many journalists have had to suffer for decades: the logic of a state accustomed to silence, isolate, attack and violate fundamental rights when anyone openly questions the lack of everyday democracy, beyond the realm of elections.

The image of a dozen guards dragging young activists out of the Senate is a metaphor for our current government. To decide by force, imposition, with revolving-doors–individuals who go from corporate positions to public posts in order to use public service benefits for private benefit– and behind-the-scenes deals that affect the future of Mexico. This point is worth repeating: in Mexico there are powerful figures who make decisions on the lives of everyone and are never voted on at the polls. These are the de facto powers and their owners: Slim, Azcarraga and Salinas Pliego. They are entrepreneurs who have always depended on state protection for their businesses. Who rely on presidents and congresses that have allowed them to become millionaires while blocking competition, who promoted the sale of public enterprises to them at derisory prices–enterprises we, Mexican citizens, paid for became their private business. In our country we have a business class so decadent that it has never been able to do business without the relationship with the political class. These entrepreneurs did not invent anything. They never created successful companies on an even playing field and in conditions of competition. They didn’t innovate. They grew up in the shadow of the state, and now in this neoliberal stage they demand that the state be whittled down, retired, to leave it all to their unlimited control. They are a risk even to the Congress that now grants them even more privileges with the Telecommunications Act.

For this reason, we do not want to debate with legislators, but directly with Emilio Azcarraga, Ricardo Salinas Pliego and Carlos Slim. When a group of citizens can set limits, face to face, to shadow powers that decide about our life, then we will see a future of real democracy.

Imagine a meeting of Greek, Spaniard, Portuguese and Italian citizens with the IMF to discuss the austerity policies that condemn them to a life without guarantees. Imagine the day when citizens can actually express their views as equals, without intermediaries. That dream is what we want to build, and we need communications media to spread that dream among those who share the same feeling, the same frustrations, the same disappointments. Two years ago Mexico was rocked by the largest youth demonstrations in decades, demanding democratization of the media system. For us, that was the prologue to a play in which our generation will be the star. The legislative route is necessary, but not the only or the final route. The battle for the radio spectrum is in the streets, valleys, mountains and villages. There they well still hear from us. Because we can no longer remain silent.

César Alan Ruiz Galicia is a young activist and journalist. He was a spokesman for the movement # YoSoy132. He has participated in the discussion of the Law of Telecommunications Reform in defense of the rights of communication and propose strategies for the democratization of the media system. He promoted the incorporation of community radio stations in the Mexican Constitution.

Standing up to NAFTA, Cuba, Climate Change in Latin America, The War on Immigrants 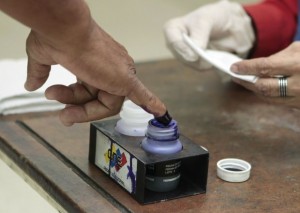