Miguel Flores arrived in the United States in 1999 and has had Temporary Protected Status (TPS) since 2001. Since then he has been working to support his mother and father, 68 and 71, who live in El Salvador. But things have changed now, and his parents could lose the stability they have enjoyed for so many years.

On Monday, Salvadorans protected by TPS in the United States were hit with a low, hard blow. The administration of Donald Trump canceled the program, a move that impacts more than 200,000 Salvadorans who have lived in the country for more than 15 years.

“We knew this was coming, but it’s not fair,” Omar Henríquez, coordinator of the National TPS Alliance and a Salvadoran TPS beneficiary, told the Americas Program. “What this government is doing is using psychological and emotional tactics to attack the migrant community. This is an anti-immigrant political decision on the part of this administration.”

In an official communication confirming the measure, the U.S. Department of Homeland Security (DHS) said that El Salvador has overcome the negative conditions related to the natural disasters, that were the reasons for granting TPS status.

The DHS statement reads in part: “The original conditions caused by the 2001 earthquakes no longer exist. Thus, under the applicable statute, the current TPS designation must be terminated.”

It also states:  “To allow for an orderly transition, the effective date of the termination of TPS  for El Salvador will be delayed 18 months to provide time for individuals with TPS to arrange for their departure or to seek an alternative lawful immigration status in the United States, if eligible.”

The decision to cancel the program has  caused commotion not only in the   Salvadoran migrant community. In less than a year, the Trump administration has canceled the TPS for citizens of four of the 10 countries that the United States had granted the TPS benefit since 2001.

“Once again, the United States has turned its back on a promise of refuge made to those suffering violence and persecution in their home countries,” said Óscar Chacón of the Americas Alliance. “In the last six months, the Trump administration has canceled the protection that has saved lives, pushing more than 250,000 individuals back to the unstable conditions of their countries. The reality of these shameful actions must be ever-present in the conscience of all U.S. citizens.”

Some senators and other politicians have expressed their opposition to the move, calling it another example of the anti-immigrant and racist policies that defined Trump’s electoral campaign and continue to be his policies in office.

“First the Trump administration canceled the Temporary Protection Status for 2,500 Nicaraguans, then for some 60,000 Haitians. Now President Trump has checked off another item on his anti-immigrant agenda by canceling the TPS for 200,000 Salvadorans,” wrote Senator Elizabeth Warren in her Twitter account.

The cancelation affects not only direct TPS beneficiaries, but also the more than 100,000 children and adoles cents born in the United States who are the sons and daughters of immigrants. Breaking up these families will have a serious impact on both parents and children, as well on the immigrant community and communities as a whole in both countries.

U.S. residents originally from El Salvador now have until September of 2019 either to find a way to change their legal status, or to sell their possessions and make the necessary arrangements for returning to El Salvador.

The immigrant community’s worst fear now is that with the cancelation, the Trump administration will start conducting roundups and massive deportations aimed at those who today find themselves in a legal limbo because of the TPS cancellation.

“The deportation orders that were deactivated when the TPS went into effect can be re-activated with this cancellation,” said Luis Paoli, an attorney. “And in the case of those beneficiaries who have had any kind of conflict with the law, there can also be deportation proceedings.”

Miguel is worried that without the protection, he could lose everything and have to go back into the shadows. Many like him would lose their legal stability, social security, health care, driver’s license, work permit, and of course the opportunity to work in a company that provides dignified employment.

“What worries me the most is losing all the benefits that I have, and to no longer be able to work at the same company,” Miguel said.

Not all migrants run the risk of being deported immediately. That’s why the civil organizations that help those who are currently protected by TPS recommend they seek legal assistance, from attorneys who specialize in immigration law so they can become better informed and learn if there are options for changing their status.

“There won’t be massive deportations immediately,” said Yanira Arias of the Americas Alliance. “The United States doesn’t have the capacity to conduct raids and process deportations on a massive scale. What can happen is that  a person found in a place where there are processes under way can be detained. That’s why what’s most important now is to get informed and find out if in your particular case there are options for regularizing your status.¨

Due to the violent situation in El Salvador, the majority of migrants don’t even consider returning to that country as a viable option. Many of them don’t want to take their teen-age children to a place where they could be exposed to gangs and crime and few have prospects of employment to support their families.

“I would like to go to El Salvador to visit my parents, but these days returning to my country is not an option,” Miguel said. “Nobody can guarantee our security in our country. There are places that are pockets of violence and extortion, and I don’t want to go through that.”

“This decision pushes us to continue the struggle that we started months ago,” said Cecilia Martínez of the National Alliance. “We won’t rest until we achieve our goal of permanent residency. In the last few months we have given the tepesianos (‘TPSers’) a face, and we’re going to keep on fighting.” TPS beneficiaries and the civil organizations that support them have been lobbying U.S. legislators, and as of now have the support of 33 members of Congress and many local politicians from areas where large groups of of migrants live.

“We already have the precedent of the 300,000 Salvadorans who obtained  their residency through the Nacara law, which is why we’re going to continue lobbying senators and local politicians,” said Omar Hernández of the National TPS Alliance. “In New York State we have the support of Senator Kirsten Gillibrand, who has asked Governor Cuomo to come out in favor of the tepesianos.”

The Nacara law, passed in 1997, provided a legal status option for citizens of Nicaragua, El Salvador and Cuba after the breakup of the Soviet Union. Although this law can be an option for some tepesianos today, not all of the immigrant community is informed about it.

Furthermore, there are immigrants protected by the TPS who do not meet  the requirements that U.S. law has established for obtaining a status change after their protection is rescinded. Miguel is one of those.

For a TPS beneficiary to start the residency process, he or she must be married to an American citizen or to a permanentt resident. Miguel  is single. They can also  change their status if their U.S.-born children apply for residency for their parents. But the majority of the children of tepesianos are still adolescents. Miguel has no children.

The TPS cancellation is not the only recent move that affect primarily Latin American immigrants. In September of last year, just  weeks before the cancellation of  TPS for Nicaraguans and Haitians, the Trump administration also canceled DACA, the program that has benefited thousands of young people who came into the United States as minors during the Obama administration.

As he did with TPS, Trump put an end to DACA, but he left it in the hands of Congress to come up with the legal means to allow these Dreamers  (DACA beneficiaries) to stay in the United States. That is also happening with TPS. Four days before the TPS cancellation announcement, Trump met with Senate Republican leaders. White House spokesperson Sarah Sanders confirmed that the president also met with representatives of the Democratic Party. Although there are few details about what was discussed at the meeting, Trump made it clear that any negotiations between Republicans and Democrats about the future of the Dreamers, and about any other legal options for immigrants, must also include funds to build the long-promised border wall. It has been speculated that this negotiation would also include the future of the TPS beneficiaries.

“We’re going to have a wall, remember that,” Trump said. “We need a wall to keep out drug traffickers, violent criminals and the criminal cartels. Any legislation on DACA must secure the border with a wall. We have to stop illegal immigration.”

Since his election victory in November of 2017, Trump has held fast to his campaign promises that reflect the anti-immigrant views expressed in his campaign. His cancellation of DACA has left thousands of young students, parents and employees in legal limbo. His previous and latest cancellations of TPS have put more than 350,000 immigrants from Honduras, Nicaragua, El Salvador and Haiti in danger. Even the visa lottery for citizens of those countries has been ended.

Carmen Rodriguez is a reporter and photographer who reports on immigration and other issues in the United States and a member of the CIP Americas Program collective www.americas.org. 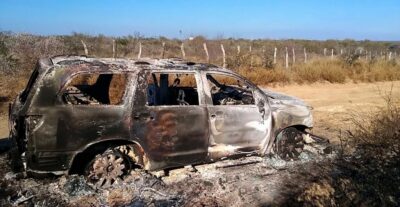