It was back in the days of enormous computers. Massive machines that occupied several rooms calculated the surface area of the earth needed to feed the planet’s population, and the area lost due to urbanization and other uses. The computers vibrated and spit out their results: in a matter of a few years, a situation of abundance could give way to one of food shortages due to supply that cannot satisfy the exponential growth in demand.

Today, similar warnings have become common, but what is shocking about this case is the fact that they come more than 30 years after the book The Limits to Growth. This study, published in 1972 by Donella Meadows and colleagues at the Massachusetts Institute of Technology, questioned whether environmental limits render continuous economic growth possible.1 Immediately, controversy arose on all sides. Conservative groups and businesses rejected the existence of the effect of ecological limits on exponential economic growth, and they also minimized the reduction of natural resources and the importance of environmental impact. But many left-wing groups during that period also questioned the study, seeing it as a bourgeois imposition or a neo-Malthusian demand that would impede the development of third world countries.

Today the food crisis and the question of peak oil once again expose those warnings on environmental limits and confront conventional defensive strategies for continuous economic growth.

Current evidence on the limits of the availability of resources is so overwhelming that even the skeptical must accept it. Possibly the best-known case is that of hydrocarbons. For years now there have been no new important discoveries while consumption continues to rise. The price of a barrel has increased to more than $100 a barrel, and even if there are many factors to explain this dynamic, nobody can deny that one such factor is the reduction in known global reserves.

In the case of grains and other foodstuffs, production has shown a tendency toward growth. For example, it is estimated that global production of cereals will increase by 2.6% in 2008, reaching a new record of 2,164 million tons, according to the Food and Agriculture Organization (FAO). But, at the same time, global reserves will fall to their lowest levels for 25 years, reaching 405 million tons in 2007-08. This represents a fall of 5% compared to the previous cycle.

Meanwhile, international food prices have not stopped rising. While in 2006 a ton of maize cost US$100, at the beginning of 2008, the price had reached US$250. Wheat had cost approximately US$200 per ton but had risen to almost US$500 per ton during the same period, and the cost of rice nearly doubled. This explains the fact that the FAO’s index of food prices registered an increase of 23% in 2007 compared with the previous year’s figure, whilst 2006 prices were also higher than those in 2005. In the first months of 2008, the prices are continuing to rise.

This situation is mirrored in the increase in prices of food agriculture. We can cite the case of investment funds and speculation in futures markets. But once again, we also observe how growing demand makes these resources scarce.

The current increase in the price of commodities ends up feeding extraction practices across the continent. The scope of these increases, witnessed not only in the case of hydrocarbons and agricultural products, but also in other products such as minerals, has led to us be entangled in a "commodities super cycle."

A "super cycle" refers to a real increase in the price of commodities, unleashed by sustained demand, over the course of at least the last 10 years. This hypothesis is defended by some analysts in the financial world, such as, for example, Citibank’s global markets group.2 The concept was first used in 2005 with particular reference to the increase in the prices of minerals such as copper and gold. But the indicators of the prices of agricultural products are also showing substantial increases (for example, the CRB index for agricultural products has shown significant increases).

This led to another peculiarity of the current situation. While in the past the problems revolved around the loss of export markets or the deterioration in the price of raw materials (one of the most notorious examples was the denouncing of the terms of exchange), now there is high demand for expensive products. Many Latin American countries enjoy this situation and in such countries the debate now centers on the distribution of economic surpluses produced by this international windfall.

This international context might appear to be very attractive but it is in fact distorting the situation. The prices continue to be volatile, especially due to investments made by agents from the financial world that generate increases as well as crashes. The proliferation of financial instruments in the big agricultural products exporting countries (including Argentina, Brazil, and Uruguay) such as contracts for future soy production both contribute to this volatility.

International competition of many commodities is based on intense social and environmental externalities. For example, bio-ethanol in Brazil achieves lower production costs but it does this by employing a workforce paid very low salaries and working in very poor conditions. Meanwhile, the increase in the production of agricultural products is done by encroaching on untouched land, thus generating an enormous detrimental impact on biodiversity, or it is done through intensifying use of land used for cultivation and farming. This will, however, generate other environmental impacts, such as those due to the increased use of chemical fertilizer: it is estimated that the use of these products will increase by 2.7% annually until 2012). In some areas, the use of agro-chemicals reaches the same levels as that in Germany or France. Also, a good number of the most fertile areas on the banks of the Paraná and Uruguay rivers have the same rates of anthropization as that observed on the large agricultural plains of the United States.

These examples indicate that there is not only the problem of the scarcity of resources but also one of accumulation of social and environmental impacts. In other words, even in the case of resources not being scarce, due, for example, to the discovery of new oil deposits, it is clear that this type of development generates strong negative effects, on both a global scale (in the case of climate change) and a regional scale in Latin America (through the reduction of forest areas, massive changes in ecological cycles, and pollution).

Resistance in the Face of Limits

None of the warnings relating to the environmental impacts and limits is new; indeed they have existed since the 1970s. Despite this, however, attitudes that reject or minimize these problems persist in Latin America, leading to the myth that the continent is a region of abundant resources, waiting to be exploited. Latin Americans would consider themselves safe from ecological restrictions because the continent has enormous areas to be cultivated, huge mineral reserves, and extensive forested areas to cushion the environmental impacts.

This defensive posturing also has a long history, and a good example of this was the Latin American response to the report written by Meadows and colleagues. In effect, 1975 saw the publication of the "Latin American World Model"3 by the Argentine Bariloche Foundation. This model rejected almost all conclusions reached by the Meadows report, in that it maintained, for example, that restrictions on food production could be extended by the expansion of farming on forested areas, such as the Amazon basin, whilst the energy limits would cease to exist due to large scale nuclear energy use, which would meet our needs to a near-indefinite point.

Such points of view are currently being repeated. These ecological limits are not being questioned; indeed there is an attempt to expand the exploitation of commodities in order to take advantage of the current international situation and generate greater rates of economic growth. Following this position, increased agriculture is accepted, the use of genetically modified organisms is defended, mineral exploration rights proliferate, and discussions on nuclear energy use are restarted. This is happening throughout the political spectrum, from the defense of mining as advocated by Alan García’s government in Peru, to Lula da Silva’s rejection of those that are trying to stop the building of dams in the Amazon in order to "save a few catfish"; from the support of the coalmines in Colombia to the nuclear proposals of Michele Bachelet in Chile, and so on.

A good number of the political actors think themselves to be immune to such ecological limits. Indeed they feel that their moment in history is upon them and that, furthermore, they should take advantage of the high international prices in order to feed economic growth in their countries. The hypnotic effect of this material growth, of the appropriation of nature to nourish financial flows that nurture a consumer society, is so intense that time and time again evidence of the effect of growth on ecological limits is rejected.

Examples from other continents aren’t very encouraging either. For example, the famous economist Paul Krugman admits that the rise in the prices of commodities is reigniting the debate on the exhaustion of resources and the limits of growth, despite the fact that this opinion has "hardly been heard" since the 1970s.4

In reality, Krugman is mistaken on one crucial point, as discussed above: warnings about environmental restrictions and unlimited growth have been repeated time and time again in the last 30 years, along with both new information and new voices. The problem, therefore, is not that not much will be heard on the matter, as if there were no contributions to be made to the debate, but rather, that traditional economists, political actors, both conservative and progressive, and many other social groups, have not wanted to listen to the debate. The current crisis of high prices offers a new opportunity to revisit the conceptual bases of development strategies. It will be necessary to begin by learning to listen to other voices. 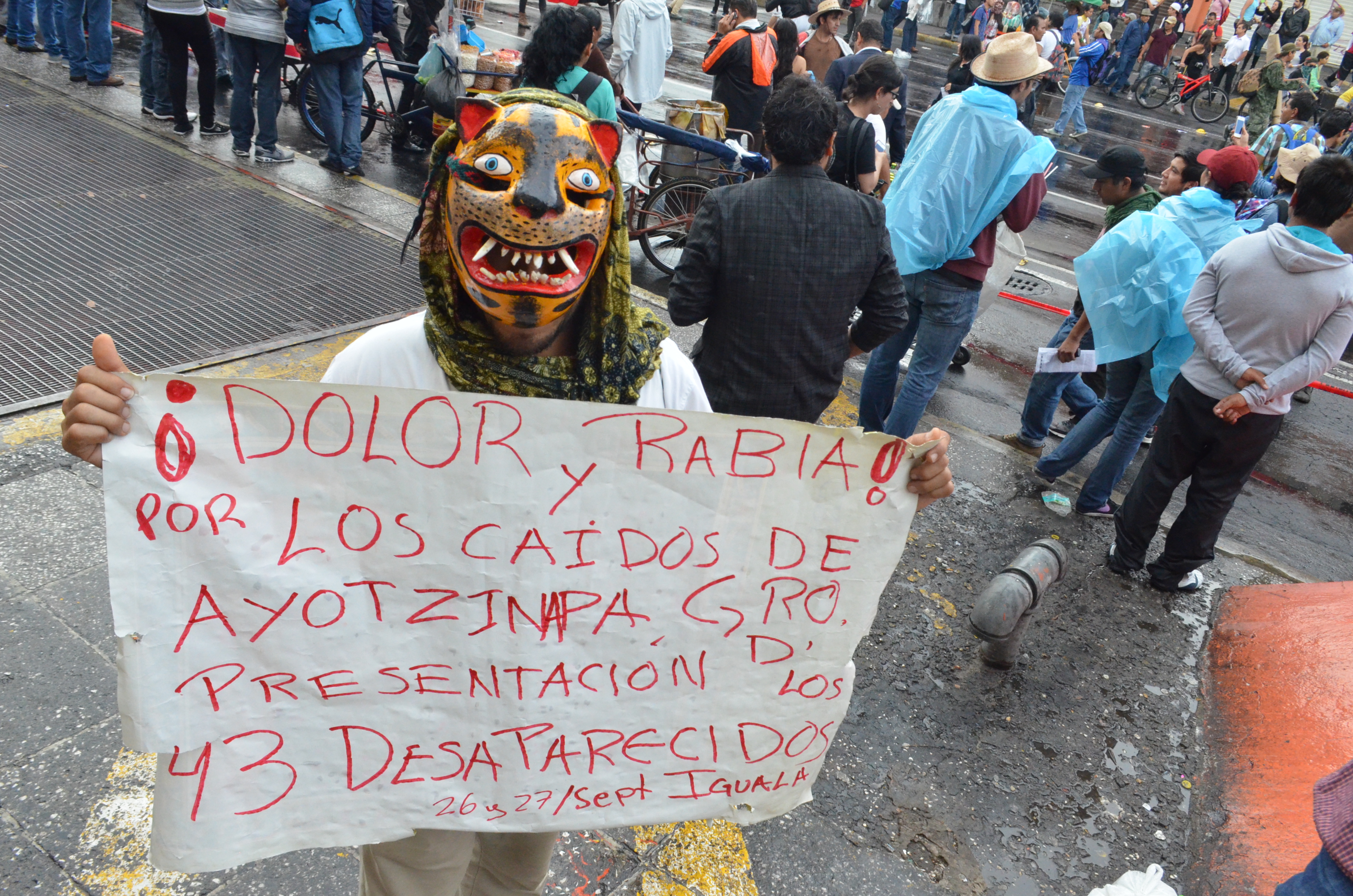 Mexican Youth Remember 1968 Massacre and Mourn Their Own Dead