We are pleased to present a new series of short reports on subjects concerning biodiversity in the Americas. These reports, written by Carmelo Ruiz, our long-time collaborator on environmental subjects and an expert on the region, bring together information on the most significant threats to biodiversity as well as on grassroots resistance to them.

We hope that this series will help you understand the risks for the planet and will aid efforts to create networks to protect it. As always, we invite all our readers to send their thoughts, comments, and opinions to: americas@ciponline.org.

2. Peru: No to the Andean Free Trade Agreement with the European Union

4. Mexico: The Struggle Against Mining in Michoacán

The insecticide Fipronil is to blame for the demise of thousands of beehives in Uruguay, provoking strong condemnation by the Apicultural Society of Uruguay (Sociedad Apícola de Uruguay, http://www.sociedadapicola.org.uy/) and environmental groups like RAPAL-Uruguay (http://webs.chasque.net/~rapaluy1/). Ninety-five percent of the country’s honey production is for export.

Fipronil, originally developed by French company Rhone-Poulenc, is a systemic insecticide, which means that it persists throughout the biological chain and ends up in the foods that are produced in the areas where it is used.

Rhone-Poulenc sold Fipronil to the German firm BASF; however, other versions of the pesticide are available in Uruguay, made by the German corporation Bayer, and imported from China.

This toxic agricultural chemical was approved by the government in response to locust infestations arising from a recent drought that destroyed areas of the countryside used for ranching and livestock.

The Uruguayan beekeeper Ricardo Carrera, in an interview with Radio Mundial Real, confirmed that 5,000 commercial beehives have been destroyed by Fipronil.

"Fipronil and similar products have been banned for use in Italy, Germany, the United Kingdom, and other countries, for its systemic character," reports Radio Mundo Real. "That means that although it is applied directly to seeds, the active ingredient is retained in a plant’s flowers, fruit, and seeds, and transmitted down the food chain to livestock, for example … and also to bees. In France it has been banned since 2004."

In the face of these condemnations, in March the government of Uruguay limited the use of Fipronil, but continues to permit its usage as a pesticide in the vast forest plantations that today dominate the country’s rural zones.

"Fipronil should be completely banned in Uruguay, a situation that would surely come to pass if organized beekeepers continue to defend their right to produce," declares RAPAL-Uruguay. "In arriving at this situation, the country will once again find itself before the serious dilemma of having to choose between replacing this insecticide and redefining the type of agricultural production in order to ensure the future of all."

Peru: No to the Andean Free Trade Agreement with the European Union

Indigenous and peasant organizations, along with other Andean social organizations, including the Andean Committee of Indigenous Organizations (CAOI, Coordinadora Andina de Organizaciones Indígenas) and the Confederation of People of the Kichwa Nationality of Ecuador (ECUARUNIARI, Confederación de Pueblos de la Nacionalidad Kichwa del Ecuador, http://www.ecuarunari.org/) met in Lima in March for "The People’s Meeting: TLC-CAN-UE, What They Are Not Saying," uniting their voices to condemn the free trade agreement that is currently being negotiated between various Andean governments and the European Union.

The participating organizations denounce the agreement out of hand for facilitating attacks on water, mineral, hydrocarbon, and forest resources, as well as biodiversity, and for enabling "biopiracy" of indigenous knowledge and biogenetic resources.

In their final declaration they state that "the Andean Community is a region that houses the majority of the world’s ecosystems: the Andean cordillera, tropical glaciers, mountains, the Amazon River region, highland plateaus, wetlands, grasslands, maritime currents such as El Niño, highly concentrated and diverse species, and reserves that are among the main sources of water on the planet. It is not a coincidence that biological diversity occurs alongside a wide cultural diversity. The environmental services for the people in the Andean-Amazon region are strategic and decisive. All of these facts demand an end to the mega-projects and Free Trade-style economic integration that is destroying Mother Earth through commodification and pollution. [The coalition] demands a different form of social integration that guarantees the survival of the people of the region and, at the same time, of humanity."

The participants emphatically reject the notion that they are opposed to everything and that they are not presenting alternatives: "Yes, we have concrete proposals on the Integration for Good Living. It is the transnational neoliberal powers that don’t have alternatives. They repeat the same rhetoric of privatization, deregulation, free trade policies, pollution, and consumerism that has not only brought us the current economic and financial crises, but above all has created the climate crisis, an environmental apocalypse that is planetary suicide. It is now time to return to Mother Earth, to reciprocity, to Good Living, to unifying in our diversity. It is time for alternatives by and for the people and to move into the future by following the footsteps of our ancestors."

This work contains reports from all of the Spanish-speaking American countries and Brazil, and includes overviews of the laws and rules, information about relevant public and private institutions, ecological and social impacts, and opposition campaigns.

"Genetically modified soy is much more harmful to the environment than other crops like corn and BT cotton (GMO). In addition to the direct effects derived from production methods, principally the copious use of herbicides, the required infrastructure projects, and mass transport (waterways, roadways, and ports) impact ecosystems and facilitate the opening of enormous expanses of territory to economically degrading practices. These practices include deforestation, land degradation and pollution, and the displacement of the rural population to frontier regions or toward urban areas, forcing the poor population to become concentrated in cities."

For more information on the book, write to: ebravo@rallt.org.

Mexico: The Struggle against Mining in Michoacán

Communities of fruit growers, livestock farmers, and capesinos in the Coahuayana region of the Mexican state of Michoacán, are ready to fight to oppose an open-pit mining project planned by the Italio-Argentinian company Ternium (http://www.ternium.com).

According to Radio Mundo Real, "The company has already unjustly caused harm to the municipality of Coahuayana through the process of capturing, storing, and releasing the rainwater that sustains the life of the entire zone. The community is opposed to all of Ternium’s activities at the mine, called La Colomera, after observing that the mining operation has increased contamination of the river El Saucito over the last few months, as well as contaminating the jungle and other organisms living in the vicinity that, according to their demonstrations, ‘are a part of our communities; this foreign firm doesn’t care about the destruction of the jungle or the river.’ The main worry is that: ‘in 10 years we will be communities without life’."

The community opposition, led by the collective Guardians of the Jungle (Guardianes de la Selva), demands that the zone be classified as a Municipal Ecological Reserve in order to mitigate further damage to the local natural resources and in order to rescind the operational grant given to Ternium in Cuahuayana.

"We don’t want to negotiate, nor do we want money or the work that has been promised by the firm; there isn’t enough money or work that could pay for the life that they are destroying here. We only want respect for our right to have clean water and respect for the dignity of the river and the jungle," the opposition to the mine announced. They added, "We are not opposed to the development of our municipality, provided that the development is not a threat to our environment or to basic natural resources such as water."

In Mexico the debate over the creation of highly detailed participatory digital maps, a practice denounced as "geopiracy," continues to heat up. These maps contain dense layers of information about cultural and natural resources in different regions.

Groups that are producing this content maintain that it is of great benefit for environmental conservation and for improving the quality of life among local populations. But detractors, such as ETC Group (1) and the Union of Organizations of the Sierra Juarez of Oaxaca (Unión de Organizaciones de la Sierra Juárez de Oaxaca – Unosjo) are afraid that the real agenda behind creating these maps is the facilitation of counterinsurgency strategies and questionable exploitative activities such as biopiracy and mining.

At the center of the controversy is the Indigenous Mexico Project (2), whose participants, among other institutions, include the University of Kansas, the Autonomous University of San Luis Potosi, various branches of the Mexican government, and the military technology firm Radiance Technologies (3). The project is financed by the U.S. Foreign Military Studies Office (FMSO) (4).

"The Indigenous Mexico Project is not unique: it is a prototype for the American Geographical Society’s Bowman Expeditions," says Silvia Ribeiro, of ETC Group. "Following the highly successful experience of Indigenous Mexico, expeditions continue in the Antilles (from Haiti and the Dominican Republic to the islands off the coast of Venezuela), Colombia, Jordan, and Kazakhstan, all with the participation of the U.S. Foreign Military Studies Office, which has carried out similar projects in Afghanistan and Iraq. Lieutenant Coronal Geoffrey Demarest, a graduate of the School of the Americas, is in charge of the project for FSMO and is also the author of numerous documents on counterinsurgency and ‘the architecture of control,’ defending private land titles, and outlining the dangers of indigenous movements and the urban poor, among others."

No to GMO corn!

The organizations and communities of indigenous and rural people, environmentalists, popular educators, grassroots organizations, clergy, producer groups, members of urban movements, academics and scientists, and political analysts of the Maiz Defense Network, energetically reject the planting of genetically modified corn in Mexico. It is an historic crime against the people of the corn, against biodiversity and nutritional sovereignty, against 10,000 years of peasant and indigenous cultivation that bequeathed this seed for the wellbeing of all the peoples of the world.

For the people of Mexico, corn is not a commodity; it is the cradle of civilization and the subsistence base of rural lives and households.

We will not allow our seeds to be lost, nor will we allow them to be contaminated by the modified genetic property of transnational corporations. We will not comply with unjust laws that criminalize seeds and rural life. We will continue to protect corn and the life of the people.

We hold the corporations that produce genetically modified seeds accountable for the loss and damage done to Mexican corn, along with the legislative powers that approved the Biosecurity and Genetically Modified Organism Law (Ley Monsanto) in favor of the companies, the Mexican government, the Ministries of Agriculture and the Environment, and the Inter-Secretarial Commission on Biosafety of Genetically Modified Organisms (CIBIOGEM), all of whom are responsible for the final measures that create the elimination of legal protections for corn:

For all these reasons:

We call on the population to demand that the foods that we eat on a daily basis are guaranteed to be free of genetic modifications.

We call on the international community to condemn Mexico for this violation of the ancestral rights of peasants, of biodiversity, and of food sovereignty, and of the precautionary principle in regions where basic foodstuffs and the global economy are based.

NO TO GENETICALLY MODIFIED CORN!

(This is a summary of the "Declaration against the Planting of Genetically Modified Corn in Mexico" by the Red en Defensa del Maiz). 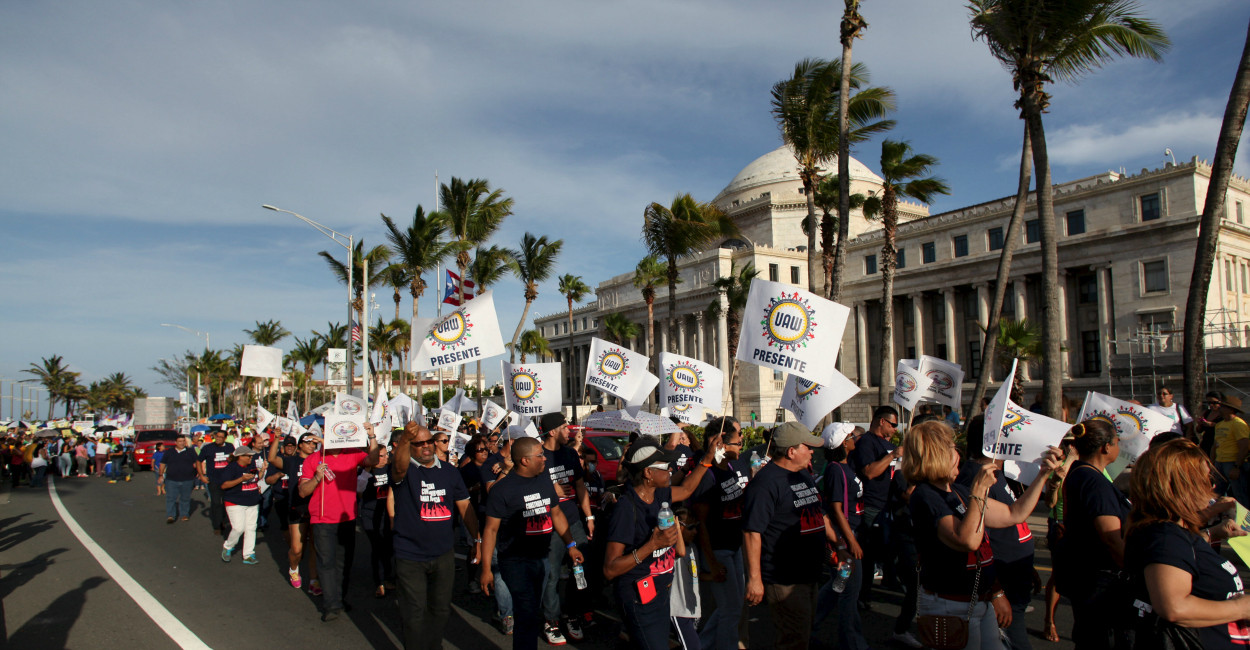 Puerto Rico: Who Really Owes Whom?