On Wednesday and Friday afternoons, hundreds of poor children find their only meal of the day at Haiti’s Sainte Claire’s Catholic Church. On Wednesday October 13, they were joined by masked and heavily armed police who handcuffed their pastor, Rev. Gérard Jean-Juste, and dragged him out through a window and off to a police station. The police did not show the warrant required by Haiti’s constitution, nor was Fr. Jean-Juste brought before a judge within 48 hours as the law requires.

A Priest’s Battle Against Injustice

Jean-Juste, known in the United States as “Father Gerry,” has spent a quarter-century preaching non-violence and fighting against illegal arrests and other injustice in Haiti and the United States. He was ordained in the U.S., but felt compelled to return to Haiti to face the injustice of “Baby-Doc” Jean-Claude Duvalier’s regime. He was soon forced out of Haiti, but he fought back in the courts. Jean-Juste won a lawsuit against Duvalier in Miami Federal Court. He also co-founded Florida’s Haitian Refugee Center, which helped thousands of refugees and challenged unjust immigration policies all the way to the Supreme Court.

Jean-Juste returned to Haiti having learned lessons from the United States about non-violent political organizing and fighting injustice through the courts. During Haiti’s nine years of elected government (1994-2004), he worked with victims of past dictatorships to channel their anger into lawsuits. From the pulpit and from the microphone of his popular radio show, he spoke out forcefully and eloquently against all kinds of violence, whether perpetrated by the constitutional government’s opponents or by its supporters. In one particularly memorable moment, when opposition political party offices were attacked after Jean Dominique’s April 2000 funeral Fr. Gerry talked on the radio for two hours straight, imploring everyone to go home, calm down, and learn to fight without violence.

Jean-Juste continued to stand up for justice after the unconstitutional interim regime replaced Haiti’s elected government last February. Although friends and relatives told him to go into hiding, he refused to leave his parish work. Nor did he let fear prevent him from denouncing human rights violations in the Haitian and international press. He was the only summoned witness who dared appear in the August 16 trial for the killing of pro-democracy activist Antoine Izmery. Everyone knew the trial was a fraud–Amnesty International called it “an insult to justice”–and Fr. Gerry knew he risked arrest at the courthouse. But he could not ignore a judicial order, so he showed up at trial.

Haiti’s Minister of Justice, Bernard Gousse, alleges that Fr. Jean-Juste associates with people engaged in violence. Prime Minister Gérard Latortue claims there was a warrant. Both have made these statements in press interviews, not legal proceedings. If the government really believes Fr. Jean-Juste is arming the hungry as well as feeding them, they should be willing to test that belief in court.

Clamping Down on the Opposition

The police register lists Jean-Juste’s crime as “disturbing the peace,” which carries a maximum sentence of four days in prison and a 17 gourdes fine (about 50 cents). But if past is prologue, Jean-Juste will have a long wait for his day in court. He joins a long line of political prisoners arrested since March, including former Prime Minister Yvon Neptune, Senator Yvon Feuillé (who is entitled to parliamentary immunity), former Deputy Rudy Hérivaux, a teacher, two musicians, nine union leaders, and a host of former officials.

All have been accused of a connection to violence in press conferences, but only one has been permitted to challenge his detention in court. When that one, local official Jacques Mathelier, went to court on July 12, the judge ordered his immediate liberation. Prison officials then gave him an immediate transfer out of that judge’s jurisdiction and he remains in jail.

The prominent political prisoners may be the lucky ones. Since it took power following the ouster of Haiti ’s elected government on February 29, the interim government and its paramilitary allies have systematically attacked Haiti ’s democracy movement, especially President Jean-Bertrand Aristide’s Lavalas party. Over 700 political prisoners too poor to be noticed by the outside world rot anonymously behind bars, according to the Catholic Church’s Justice and Peace Commission. Well over 1,000 more democracy supporters have been killed.

The interim government’s violence has increased over the past few months. On September 7, the Inter-American Commission on Human Rights expressed its concern “over several key areas in which the basic rights and freedoms of Haitians remain weak and imperiled.” On September 16, Interim Prime Minister Gerard Latortue lashed out at his critics during an interview on Radio Caraibes, complaining that human rights criticism was making his relations with donor countries difficult. Later that day police officers raided the offices of the Confederation of Haitian Workers (CTH) labor union and arrested nine union members, all without a warrant. The official justification for the arrest was that the defendants were “close to the Lavalas authorities.” All were still in custody as of November 8.

On September 30, police interrupted a legal demonstration commemorating the anniversary of Haiti’s September 30, 1991coup d’etat. Human rights observers accompanying the demonstration reported that police fired on the march, after trying to disperse it. On the morning of October 1, interim Prime Minister Latortue conceded in a radio interview that the police had shot at protesters and individuals had been killed. He asserted that the authorities would continue to take forceful action against protests.

On October 2, the police raided a radio station and arrested two Senators and a former Deputy from the Lavalas party who had criticized the interim government during a radio debate, as well as a lawyer who came to represent them. Those arrests were also made without a warrant and “justified” outside of the judicial process with vague statements about connections to violence. The lawyer and one of the Senators were released on October 5, but the others remain in jail.

The police continue to raid poor neighborhoods, considered bastions of support for Haiti’s constitutional government, using arms searches as a pretext. They invariably arrest suspected dissidents but find few, if any, guns. One raid on Wednesday, October 6, a purported arms search in the poor neighborhood of Bel-Air, yielded 75 illegal arrests and not a single weapon.

The United Nations troops in Haiti have not intervened to restrain illegal police behavior. UN troops guarded the perimeter of the radio station during the October 2 arrests, and routinely accompany police on illegal raids. According to a BBC translation of an interview broadcast October 8 on Haiti’s Radio Metropole, the UN Commander General Brazilian Augusto Heleno Ribero Pereira, in discussing police raids in poor neighborhoods, declared that “we must kill the bandits but it will have to be the bandits only, not everybody.”

The term “bandits” in Haiti sometimes refers to presumed criminals, but also more generally to poor urban young men, especially those who support Lavalas. General Pereira later blamed the recent upsurge in violence on a March 2004 speech by John Kerry, expressing support for democracy in Haiti.

The United States, Prime Minister Latortue’s principal international patron, is well-placed to rein in these abuses, and should use its leverage to pry the political prisons open. The State Department did scold Haiti’s authorities after July’s arrest of Prime Minister Yvon Neptune, but it was more bark than bite. Assistant Secretary of State Roger Noriega declared that “sooner rather than later the authorities in Haiti are going to have to give Neptune an opportunity to defend himself before an independent judge.” That was July 17; three days later the U.S. pledged $230 million to the authorities in Haiti, and four months later Neptune has not seen the judge who issued his arrest warrant.

The police at Sainte Claire’s may have given the most honest explanation for the arrest of Fr. Jean-Juste, and the attacks against the democracy movement. They said Jean-Juste was accused of “troubling the public order.” When “public order” means widespread violence, political arrests reminiscent of the Duvalier era, and hunger unprecedented in modern times, Fr. Gerry’s preaching peace, working for justice, and feeding children may indeed make him guilty as charged. 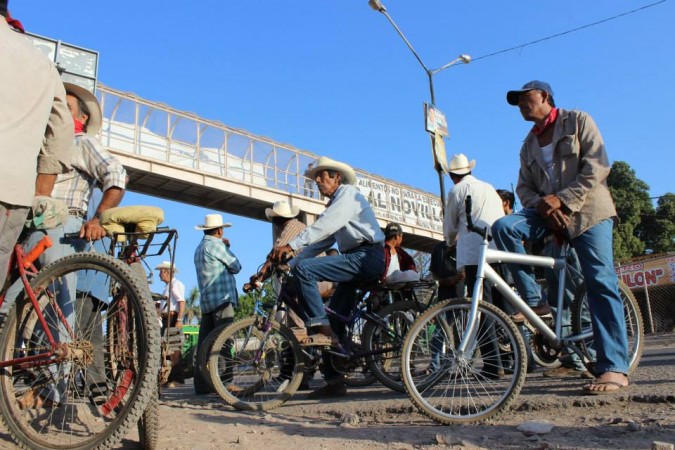 Road Blocks to Stop Robbery of Water from Yaquis