A beautiful green and gold checked carpet hides the tragedy of the Yaqui Valley. This northeastern region of Mexico has been devastated by intensive use of agrochemicals under a capitalist model of agriculture that has polluted the air, soil and water, and lethally affected the lives of its people for more than half a century.

The Yaqui Valley covers an area of 225 thousand hectares of canal-irrigated land in the southern part of the state of Sonora. Most of it is sown in wheat, corn, cotton, vegetables and animal feed. Together with Baja California, the region produces 65 per cent of Mexico’s annual wheat output.

I was born in a small farming town south of Ciudad Obregón, and lived there until my adolescence. Several times I saw my father come home from work in the fields with the symptoms of poisoning. He operated agricultural machinery, including tractors fitted with equipment to spread pesticide, defoliant and fertilizer. He died of brain cancer not long after his 61st birthday. A malignant glioma extinguished his life in less than six months, before the powerless eyes of his loved ones.

The criminal irresponsibility of companies that make and sell agrotoxins continues to be an open case. Given the complete lack of information available to farmworkers, the people who apply the chemicals, and the general public, just pasting a warning label on is not enough to alert them to the substances they’re exposed to. After being applied without any kind of protective gear, the containers are abandoned wherever and pilots clean out the tanks of their planes by discharging residues from the air, even over populated areas.

Where I grew up, as soon as children are tall enough to carry sprayer tanks on their backs or strong enough to hold a flag to direct a fumigator plane they start to work in the fields. For a few pesos a day, children work at jobs that mean they are surrounded by a cloud of poison for hours on end. Even if they manage to escape immediate poisoning, the harmful effects of cumulative exposure are felt soon after.

Since childhood, I have carried in my olfactory memory the smell of weed-killer as a macabre form of nostalgia.

It is well known that children develop best when nourished with milk from their mother’s breast. This indisputable medical fact, however, is not so true for children growing up in the Yaqui Valley. Research over the last two decades has documented the presence of organochlorine pesticides in the breast milk of Valley residents. A 1990 study commissioned by the municipality found that 85.71 per cent of samples from lactating mothers in Pueblo Yaqui contained between one and three types of pesticide.  The compounds detected were aldrin, HCH (lindane), technical DDT and p,p’-DDE, with average concentrations of 0.11, 0.17, 0.27 and 1.90 parts per million respectively. The research showed that levels of lindane, technical DDT and p,p’-DDE were above limits for milk, as established by the UN’s Food and Agriculture Organization and the World Health Organization.

Subsequent studies have confirmed these dramatic findings. Three years ago, another study carried out among Pueblo Yaqui residents traced for the first time the transfer of pesticide through the placenta from pregnant women to their newborn babies. Samples of the mothers’ blood, amniotic fluid and umbilical cords contained the pesticides alpha-HCH, gamma-HCH (lindane), HCB, dieldrin, endrin and DDE.

Three-month-old breastfeeding babies in the area showed the same pesticides in their blood. At six months, the substances were still present. Some had been partially broken down, but concentrations of lindane and dieldrin exceeded levels found in people with normal exposure.

Chronic exposure to agrotoxins, even at low doses, causes grave damage to human health, including cancer, chromosomal changes, congenital malformation, problems with the nervous system and disorders in the endocrine system, among others.

Recently some governmental and educational institutions have been pressured by public opinion into half-heartedly investigating the topic and teaching about it. They have created special waste bins for poisoned containers with the idea of promoting the safe use of agrochemicals. The problem with this idea is that it lacks foundation – there is no safety from agricultural poisons, whether you are a farm worker, a rural resident or a consumer of the products of industrial agriculture.

Once applied, agrochemicals contaminate rivers, aquifers, coasts, air, soil and food. Human beings are exposed to them through inhalation, ingestion and physical contact.

Each year around the world there are three million serious poisonings from agrotoxins, killing at least 300,000 people. Ninety-nine per cent of these deaths occur in developing countries.

A Nobel Prize for the Green Revolution

The main author of this environmental and human disaster was awarded a Nobel Peace Prize. Norman Ernest Borlaug, was a U.S. researcher whose techniques for genetically improving wheat became the basis of the Green Revolution. His techniques were developed in test fields paid for by the Mexican government – in this case, the Northwestern Center of Biological Research, in the heart of the Yaqui Valley.

Borlaug brought in a new model of agricultural production, promoted since the mid-20th century and based on the intensive use of hybrid seeds, chemical fertilizers and pesticides. The model also required extensive mechanization of the countryside to facilitate the expansion of agribusiness. When World War II ended, these were the tactics imposed by the military-industrial complex to maintain hefty profits. Explosives were turned into nitrogenized fertilizers, lethal gases into pesticides, and war tanks into tractors.

After that, the use of agrotoxins became widespread in agriculture with the justification that increased yields would end hunger. Their use extended beyond agriculture into industry, and even into public health campaigns, such as the effort to combat diseases like malaria through the massive use of pesticides.

The agribusiness model generated a mindset, it extended single-crop farming, it spurred the concentration of land in the hands of a few large landowners, and it consolidated the political power of the big producers. This increased labor exploitation, country-to-city migration and rural unemployment. At the same time, it increased the capitalist profits of large rural landowners along with transnational chemical, metallurgical and biotechnological companies. From the start, they had strong support from the government and scientific and technological institutions. For instance, a law was made worldwide to subsidise the multinational companies with public money.

Along with the myth of the agricultural Titans–the supposed pioneers of the opening of the valley to irrigation and cultivation—Borlaug’s fame grew. He became almost a lay saint to the big landowners in Sonora. They built streets and statues in his name and continue to pay him homage in some parts.

Not long before the end of Borlaug’s long life, I asked him if the Green Revolution fulfill its promise to end hunger. He admitted that we had reached the limit of increasing yields with Green Revolution technologies and said it was necessary to confront the problem with policy decisions. This was in the early nineties. Today, it could not be clearer that the solutions to the food crisis do not lie with technology, but with a radical transformation in the patterns of food production, distribution and consumption.

For Borlaug, the environmental harm of agrotoxins linked to the technological package of his revolution wasn’t important.

As a result of the model, there are 20 large agrochemical manufacturers in the world today, with sales volume exceeding 40 billion dollars a year and producing 2.5 million tons of poison annually.

The main companies in this market are Syngenta, Bayer, Monsanto, Dow Agrosciences and Du Pont. Latin America is an important and growing market for them, where turnover from the sale of agrochemicals grew by 18 per cent between 2006 and 2007 and 36.2 per cent between 2007 and 2008.

A study of chemicals used in the Yaqui Valley between 1995 and 1999 found the most common to be herbicides (34%), carbamates (27.53%), organophosphates (27.53%), fungicides, organochlorines and pyrethroids. The total amount of active ingredient released into the valley was 3146 tons, 616 kg. Chemicals were used most in 1998 when 806 tons,123 kg were released. Illnesses suffered by people in the valley included bone-marrow aplasia, acute leukemia and non-Hodgkin’s lymphoma. (Valenzuela Gómez, L. 2000. Tesis Profesional. ITSON. Ciudad Obregón, Son.)

A working agronomist who preferred to remain anonymous said the pesticide he uses most at the moment is glyphosate, produced by Monsanto and marketed in Mexico as Faena (Roundup, elsewhere). According to a recent study, glyphosate formulae and metabolic products cause the death of embryos, placentas and human umbilical cells in vitro, even in small amounts.

In the Yaqui Valley, according to the anonymous source, parathion and malathion are still being applied. The former, which is extremely toxic, is prohibited in several countries and by the Rotterdam Convention. As for the latter, the USA Occupation and Health Administration has set a limit of 15 milligrams per cubic meter of air at work, for shifts of eight hours a day and 40 hours a week. These recommendations are almost impossible to observe.

Agrotoxins are the key ingredients of industrial agriculture. They are made up of poisonous chemical substes including pesticides, defoliants, herbicides and fungicides. Chemical fertilizers come under this grouping, as their polluting effects degrade soils and their components work their way into the food chain through swamps and waterways. Genetically modified seeds should also have a place in this category, linked as they are to the intensive use of carcinogenic pesticides including glyphosate, and to plants that produce their own insecticide.

Starting from this definition and with abundant information charting the size of the enemy, representatives from all the countries belonging to the Latin American Coordinating Committee of Rural Organizations (Coordinadora Latinoamericana de Organizaciones del Campo-CLOC) met in August 2011. In a peasants’ education center located in Viotá, Colombia, they analyzed the problem from the point of view of their different regions: the southern cone, the Andes, Central America, North America (Mexico) and the Caribbean.

The group decided to launch a public education campaign under the slogan “Agrotoxins Kill”, to inform public opinion, end the myth that using agrotoxins can ever be safe, and fight for their definitive eradication.

The campaign aims to challenge agrobusiness ideology, influence public opinion and reach communities and families. They hope it will create a united front for environmentalists, peasants, the working class, students, consumers and anyone who wants food production to respect the environment.

Using all kinds of media available, representatives will explain how and why countries should focus efforts on producing diversified food that is healthy for everyone and based in agroecology. In the same way they will name and shame the companies that manufacture and sell agrotoxins, and wake society up to the need to change our food-growing model, which currently produces poisoned food, destroys the environment and delivers bumper profits for a small few.

An organization was designated to lead the campaign for each region, with the participation of all CLOC’s organizations. In Mexico, this will be done by the National Union of Autonomous Regional Peasants’ Organizations (Unión Nacional de Organizaciones Regionales Campesinas Autónomas). A team will be put together for continental collaboration, supported by a Quito-based operational secretariat.

The campaign will be launched on December 3, Global No Pesticides Use Day, with a pre-launch during the International Agroecology Conference in Havana, Cuba in November.

It is urgent that we begin to break the perverse circle of agricultural production whereby the same transnational company produces the seed and the toxins, and then brings its poisons to our table. 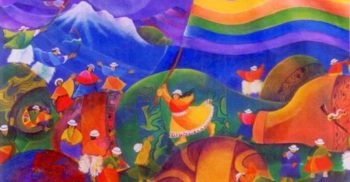 Patagonia, the Mapuche struggle for the survival of the planet