Mexican human rights defenders have been under attack over the past weeks. The murders of Nepomuceno Moreno of the Movement for Peace with Justice and Dignity (MPJD), whose son was forcibly disappeared apparently by government security forces in Sonora; and Trinidad de la Cruz, leader of the autonomous, indigenous community of Santa Maria Ostula, Michoacan; and the shooting of Norma Andrade, leader in the movement to bring justice to the victims of femicides and the disappearance of young women in Ciudad Juarez, sent shock waves through the human rights community. We were left with the loss, and a sense of fear and impotence that can only be countered with action.

Each case below ends with actions of solidarity. Not only is it vital to demand justice in these cases, there is an URGENT need to protect surviving relatives and activists. We have already seen too many cases of entire families (like the Reyes of Valle de Juarez) and communities systematically murdered or displaced because we did not protect them or demand an immediate end to the persecution.

In addition to the specific actions, please take a moment to send organizational letters of condemnation and solidarity to  info@americas.org  We will channel them to the organizations at risk and to the authorities responsible for bringing these crimes to justice. Add your voice to the indignation and pressure to solve these crimes and protect human rights defenders in Mexico.

The murder of Nepomuceno Moreno Nunez on Nov. 28, 2011 caused much consternation here, even in a nation accustomed to murder. Nepo, as he was called, was very well-known within the Movement for Peace with Justice and Dignity; he accompanied both caravans for peace and spoke out frequently at demonstrations regarding the forced disappearance of his son. According to Mr. Moreno’s testimony on July 1, 2010 his son Jorge Mario Moreno Leon was taken into custody by state police near Ciudad Obregon, Sonora. His family has not heard from him since. By available evidence, his disappearance was a crime carried out not by members of organized crime, but by police. Even with the clear implication that security forces were involved in the disappearance, the state Governor, Guillermo Padres, refused to meet with Mr. Moreno and there have been no effective investigations of the crime. Jorge Mario Moreno remains missing.

Mr. Moreno had received numerous death threats related to his demands to find his son and his protests against the government for its possible involvement in the crime and failure to act. He requested protective measures from the government, and delivered the case of his son and the request for protective measures directly to President Felipe Calderon at the second meeting with the Movement for Peace with Justice and Dignity (MPJD). For his efforts, he was shot dead in broad daylight in the capital city of Hermosillo, Sonora. State government officials added insult to injury by immediately declaring that the main line of investigation had to do with supposed ties of the victim to organized crime. Smearing the name of the murdered to cover up government responsibilities has become a common procedure in this war on drugs that reveals itself more each day as a war on the people.

The MPJD issued a statement Nov. 29 saying “the bullets that killed him were the only response Nepomuceno received to his love as a father, his desire for justice and his decision to join the movement for peace in Mexico… We hold the federal and state  authorities responsible for the death of Nepmuceno, for omission, since they failed to respond to our friend’s demands for protective measures. We demand that the state of Sonora solve the homicide case and arrest the guilty parties, as well as providing the measures necessary to ensure the security of Nepomuceno’s relatives… ”

ACTION: Write in English, Spanish or your language to demand justice in the case of the assassination of Nepomuceno Moreno and the safe return of Jorge Mario Moreno Leon. Send mails to:

Human rights organizations and defenders strongly condemn the recent attack on Norma Esther Andrade, president of the organization Nuestras Hijas de Regreso a Casa, A.C. (Bring Our Daughters Home), committed on Dec. 2 in Ciudad Juarez, Chihuahua, and demand full protection for her and members of her family.

We demand justice and full protection for the Andrade family, an immediate impartial investigation and punishment of those responsible.

We demand respect and security for all human rights defenders in Ciudad Juarez.

Norma Andrade has a long history as an organizer against femicides, and for justice and women’s rights. After the assassination of her daughter, Lilia Alejandra, in 2001, she co-founded with Marisela Ortiz the organization Nuestras Hijas de Regreso a Casa (NHRC), to bring to justice the cases of women murdered and disappeared in Ciudad Juarez.

According the report from NHRC, the attempt on her life occurred “when she was getting into her van to drive to work. At that moment and in the company of her two grandchildren, an unidentified assailant approached her and fired a gun repeatedly, shooting her five times in the abdomen, right shoulder and right hand.”

Since NHRC was founded, its members have received thirty threats and acts of harassment, none of which have been investigated by the authorities despite the fact that the majority were reported. Since 2008, four members of the organization have received precautionary measures from the Inter-American Commission on Human Rights (IACHR). The seriousness of the threats and attacks has forced members of the organization to change residence, and some of them to seek refuge in the United States.

The attack on Norma Andrade is not an isolated incident. It forms part of a disturbing pattern of attacks on women human rights defenders who denounce violence against women and impunity in Mexico, especially in the state of Chihuahua.

We reiterate that it is the responsibility of the State to provide protection for human rights defenders and guarantee the safety and security of individuals at high risk due to their activities to promote human rights and justice.

We charge the Mexican government with assuring the life, security and physical and psychological integrity of defender Norma Andrade and her family. We join in with the NHRC and other organizations and networks of human rights to  demand:

Update: Ms. Andrade was released from the hospital in Ciudad Juarez before full recovery because the hospital administration claimed it could not guarantee the safety of its staff due to threats. Her daughter, activist Maria Luisa (Malu) Garcia Andrade issued a statement denouncing that the Federal Police protection for her mother has been withdrawn and municipal police protection has been faulty.

Along with organizations of the National Network of Women Human Rights Defenders in Mexico we are seeking signatures to the following declaration. Please send signatures to natalia@justassociates.org as soon as possible. Thank you for your support, CIP Americas Program, Just Associates, AWID

The following is information compiled mainly from our partner Desinformemonos, a Spanish-language e-magazine. Their team of reporters committed to social justice has spent long periods writing on and accompanying the people of Ostula.

On Dec. 6, Trinidad de la Cruz Crisóstomo was captured, beaten and kidnapped. His body was found shortly thereafter.  Trino–as he was known to many–accompanied members of the Movement for Peace with Justice and Dignity to the Nahua autonomous community of Xayakalan, in Ostula, Michoacan that day. The group was kidnapped by an armed commando; the other members were released unharmed but Trino was brutally beaten in their presence and subsequently murdered.

The National Association of Democratic Lawyers has termed the crime an “extrajudicial execution”. The cars traveling to Xayakalan were originally escorted by Federal Police. As they approached the town, the police reportedly announced that they would go no further “due to the presence of armed groups” and withdrew. The group reached the village but was abducted shortly after leaving to return to Santa Maria Ostula. The abandonment by the official escort–mandated by law–was a critical contributing factor to the crime.

Trinidad de la Cruz, 73, was the head of the indigenous Nahua community communal guard and a leader in 2009 when the group recovered some one thousand hectares along the Michoacan Pacific coast by law belonging to them but coveted by powerful interests– drug traffickers, tourism and mining developers, and government.

Trino’s murder eliminates a key defender of human rights but also is aimed at weakening a community that has risked everything to defend its natural resources. The community opposes the government’s top-down development plans that hve not even been revealed to the community. Among these are a project to build a new highway as part of the Sustainable Regional Plan for Michoacan and that includes the construction of hotels and residential areas. The Plan also includes large tourist developments along the famous surfing beaches of the area. The community has begun small-scale tourist projects but refuses to cede its land to large developers. It also opposes the government’s rural land program Procede as a form of privatization of communal lands and has refused to enter into negotiations with mining interests, out of concern over the social and environmental effects.

The forty families who inhabit the village of  Xayakalan, in Ostula, Michoacán, are totally unprotected faced with threats from the armed group that assassinated Trinidad de la Cruz Crisóstomo. Although they put out a alert regarding their situation informing that they fear another attack, up to now the Secretarty of the Navy in charge of the zone has not initiated rounds, despite having established a checkpoint just minutes from the town.. thi is a violation of the agreement of lat Nov. 28 in a meeting between members of the community of Ostula, among them Trino, and representatives of the federal and state governments, in which they promised to apply security measures for the population, including rounds.

In this context, the current offensive follows the neoliberal manual on indigenous territories that stipulates first instilling terror through assassinations and disappearances, until families are forced to abandon their lands and displacement is complete…

We demand immediate guarantees for the security of the community of Xayakalan, investigation and prosecution for the murders,  and the legal resolution to disputes over the lands that belong to them, providing clear title to the community.

http://www.change.org/petitions/gobierno-federal-mexicano-y-al-gobierno-de-michoacn-alto-a-la-guerra-de-exterminio-contra-la-comunidad-nahua-de-sta-ma-ostula
Translation: Stop the war of extermination against the Nahua community of Santa Maria Ostula, Michoacan

2. Send statements of support, demanding government protection and justice in the assassinations to info@americas.org 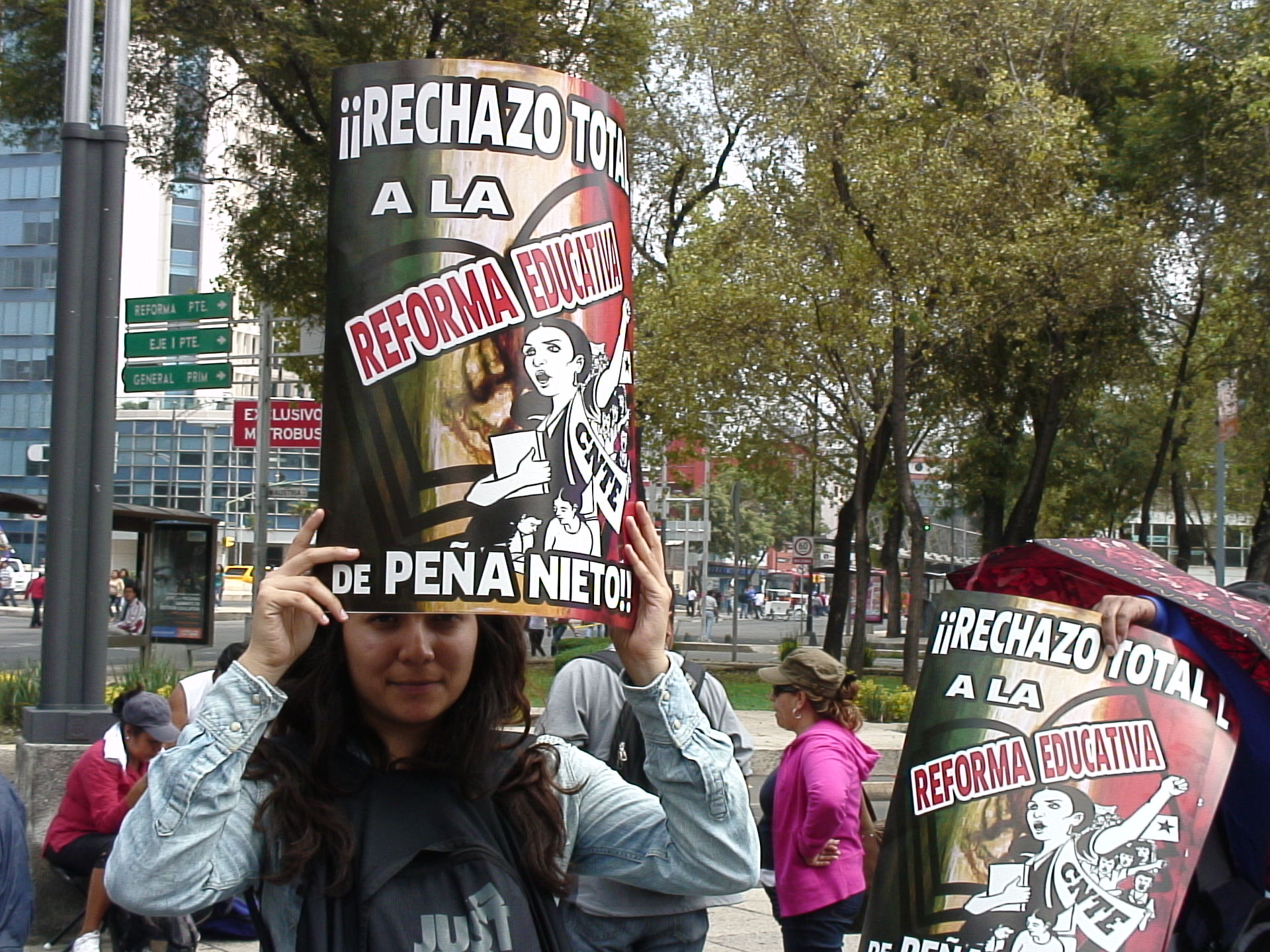 Women in the Teachers’ Movement: A Lesson in Resistance