The Americas Program has been following the crime of the murders and disappearances of Ayotzinapa since day one. We have appeared on Democracy Now, BBC, Al Jazeera, CCTV and scores of US and Mexican radio programs to comment on the case. We have covered events and interviewed parents and students in Guerrero and Mexico City and done public speaking events in Europe, US and Mexico.

We have strongly agreed with youth and families that this is a crime of the state. That has profound implications for Mexico, the citizenry and international relations. With the experts report confirming this, now is the time to stand with the parents and demand accountability. We urge you to read and view the materials here and take action.

No more lies around Ayotzinapa! We demand the government accept the recommendations of the GIEI investigative report!

I am Omar Garcia, one of the normal teaching school student survivors of the attacks that resulted in the disappearances of our 43 comrades by Mexican security forces. Together with family we have organized this petition after confirming that the Mexican government lied about the whereabouts of our comrades.

They said that they had been killed and burned in the Cocula dump. We were told that was the historical truth. And now, after the Interdisciplinary Group of Independent Experts (GIEI) published its report, we know that we were lied to.

There is only one way to know the true fate of our children, siblings, friends and comrades—accepting all the recommendations made by the GIEI and allowing them to stay in Mexico to monitor the investigation.

Help us to demand this of all the Mexican agencies, in particular the Presidency, PGR, SEGOB and CEAV. We want you to get the President Peña Nieto to make a public commitment to accept all the recommendations of the GIEI and ensure that the group remain indefinitely in Mexico to accompany the investigation.

We need you know more than ever. We won’t stop until we find them. And you?

The School of the Americas Watch’s THUNDERCLAP Campaign to Suspend U.S. Aid to Mexican Security Forces

This Thunderclap campaign is intended to coincide with the one-year anniversary of the enforced disappearances of the 43 Ayotzinapa students on September 26-27, 2014. Recent reports published by independent experts (the GIEI report) and UC Berkeley investigative journalists persuasively show that the Ayotzinapa crimes involved both Mexican police AND military. But the Ayotzinapa families CONTINUE to be denied truth and justice because Mexican officials – including the President and the Attorney General – have been lying and covering-up for the security forces for the last year.  Yet the U.S. continues to enable this culture of corruption and impunity by funneling arms, training, and billions of tax-payer money for to Mexico security forces responsible for human rights violations.

Please spread the word and take online action (http://thndr.it/1KiUkb5) to contact your Members of Congress, the White House, State Department, & Sen. Marco Rubio (presidential candidate who oversees the “Drug War” in the Senate) to SUSPEND ALL AID NOW to Mexican military & police.

Please demand the truth about Ayotzinapa now. Please demand all suspension of military and police aid to Mexico (including application of the “Leahy Law“). U.S. tax dollars should not support crime, cover-up, and impunity. The families of Ayotzinapa and millions of other Mexican families deserve better.

One Year After the Disappearance of the Students of Ayotzinapa
The Justice Brigades of Ayotzinapa
Ayotzinapa Calls for Mexico’s Transformation
The L.A.-Ayotzinapa Connection
Led by Latinos, US Cities Organize to End Plan Mexico and Support Ayotzinapa
Students March for Ayotzinapa and for Their Future
Ayotzinapa Protests: Report from Ciudad Juarez
Mexico’s Youth Under Siege
Mexico in Crisis: U.S. Drug War Funding, Ayotzinapa and Human Rights Violations
Disappeared Youth Spark Protests in Mexico’s Worst Political Crisis in Decades
Report from Guerrero: The Real Criminals
Mexican Youth Remember 1968 Massacre and Mourn Their Own Dead
Zapatistas march for Ayotzinapa in San Cristobal
Oaxaca in solidarity with Ayotzinapa students 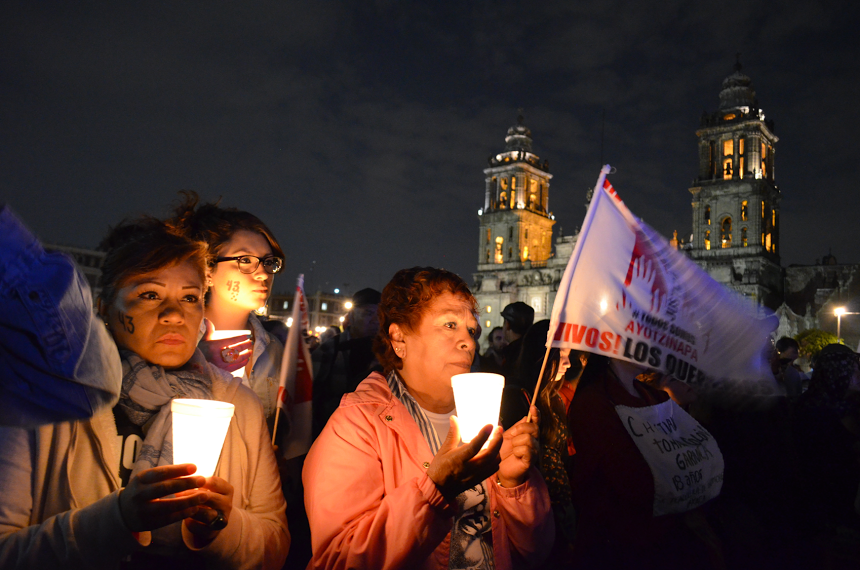 On Government Lies, Human Bonfires and the Search for Truth