In 2009, Mariano Abarca was murdered for his activism against a Canadian mining project. Tired of waiting for justice from the Mexican State, his family is taking the case to the Organization of American States

Seven years and seven months have passed since Mariano Abarca joined the ranks of the dozens of environmental defenders that have been killed in Mexico for resisting the destructive mining projects that are tearing apart the Mexican countryside.

In that time, the Mexican government has not brought anyone to justice for the murder. On June 26, Abarca’s family, having lost all faith in the Mexican justice system to prosecute the case, sent a petition to the Inter-American Commission on Human Rights (IACHR). The petition accuses the Mexican government of violating Abarca’s right to life, his right to judicial protection and several other rights included in the American Convention on Human Rights.

If the IACHR admits the case, the Mexican government will need to respond to the petition, and there may be a hearing before the Commission. The Abarca family is optimistic that the case will be admitted.

“It’s indisputable that there was a violation of the right to life, that there has been no serious, deep investigation, and that no one has been punished, so in this sense the responsibility of the Mexican state is clear,” said Miguel Ángel de los Santos, a professor at the Autonomous University of Chiapas (UNACH) and legal representative for the Abarca family, in an interview with the Americas Program.

“It’s also clear that the state didn’t fulfill its obligations to guarantee Mariano’s rights, and that the rights of the family are still being violated. Their search for justice has not ended, and that represents frustration, anguish, which also constitutes a violation of human rights.”

The Abarca family is joined by three co-petitioners: the Mexican Network of Mining-Affected Communities (REMA), of which Abarca was a founding member, Otros Mundos Chiapas, and the UNACH human rights center. As a member of REMA, Abarca was on the front lines of a battle against a barite mine operated by the Canadian company Blackfire Exploration in his hometown of Chicomuselo, Chiapas.

A series of investigations from 2013 by Mining Watch Canada and the United Steel Workers tell the story of the conflict over the mine, showing the complicity of the government of Chiapas, Blackfire Exploration and the Canadian Embassy in the events that lead to Abarca’s death.

Blackfire Exploration, a small, privately-held company based in Calgary, Alberta, obtained mining concessions in the Chicomuselo municipality of Chiapas in 2005.  The concession overlapped with the territory of two ejidos, Ejido Nueva Morelia and Ejido Grecia, which both initially opposed to the project. Officials from the Canadian Embassy traveled to Chiapas several times before the mine went into production, and managed to help Blackfire negotiate land-use agreements with the Ejidos, although many ejidatarios still felt that they had not consented to the project. In late 2007, Blackfire started extracting barite, a mineral used in oil and gas exploration.

Over the next two years, the mine’s operation led to a series of conflicts, relating to barite being extracted from along an access road that the company had built through Ejido Nueva Morelia, in violation of the land-use agreement between the company and the ejido. Abarca, as a leader of REMA in Chicomuselo, organized ejitadarios to defend their territory, and began investigating the company’s connections to local government and the Canadian Embassy.

Several times throughout 2008 and 2009, the inhabitants of the Nueva Morelia Ejido blocked Blackfire’s access road, demanding that the company comply with the terms of the land-use agreement, stop extracting barite from along the road and pay the ejido for the barite that had already been extracted. The roadblocks created headaches for Blackfire and local government, and they responded with a series of escalating threats and attacks against the activists that culminated in Abarca’s murder.

In one incident from August 2008, armed men wearing Blackfire uniforms broke into Abarca’s house, held his wife at gunpoint and beat him and one of his sons. A year later, Chiapas state police arrested Abarca at Blackfire’s request and held him for eight days without charge.

Knowing that his life was in danger, Abarca began to raise his public profile. In July 2009, he traveled to the Canadian Embassy in Mexico City to deliver a message about Blackfire’s conduct and the threats to his person. A video from that visit shows him telling an embassy representative that Blackfire is using its employees as shock troops for violent attacks on activists.

On Nov. 23, Abarca submitted a complaint to Chiapas government against two Blackfire employees for threats and harassment. In the complaint, he stated, “If something happens to me, I hold the Canadian mining company Blackfire responsible.”

Six days later, he was killed.

“It was a death foretold,” said Libertad Díaz Vera, a representative from Otros Mundos Chiapas, in a press conference announcing the petition to the IACHR. “We made statements on several different occasions that Mariano’s life and his family’s security were at risk that there were robberies and attacks on his family. He even went to the Canadian Embassy and said that he was receiving threats, but even then, they didn’t listen.”

Three men–one current employee of Blackfire, and two former employees–were arrested for the murder, but they have all since been released.

“This case is important not just because justice for Mariano is an end in itself, and because his group was very important in resisting mining in southern Mexico, but also because it brings together many phenomena having to do with processes of criminalization across Mexico and Latin America,” said Gustavo Lozano, a spokesperson for REMA. “It took place in the context of a model of extraction where corporations, in this case mining companies, dispossess communities of their territories to get access to the minerals under the ground.”

In the past two decades, foreign mining companies, most of them Canadian, have been granted cheap concessions of hundreds of thousands of hectares of Mexican territory under terms of the North American Free Trade Agreement (NAFTA) and related neoliberal reforms by the Mexican government. Mining concessions now account for more than 10% of Mexican territory, and foreign companies remove over ten billion dollars’ worth of minerals from the country a year. As mineral extraction often implies dispossessing local communities of their territory and common property, conflicts like the one in Chicomuselo have become all too common in Mexico.

The Abarca family and their supporters hope not only to achieve justice for their father and husband, but also to help defend environmental activists in the intensifying conflicts against mining companies. Although there are many cases of the Mexican government failing to investigate cases of murdered environmental activists, Mariano Abarca’s is the first to be  brought before the IACHR, and could create a precedent where similar cases could be considered human rights violations on the part of the state in question.

“Protecting environmental defenders is more important than ever, and we hope that Mariano’s case will break the pattern of violence and impunity,” said Díaz Vera. “People will keep resisting, and this precedent is important because the fight is not going to end; it’s only going to get more intense.” 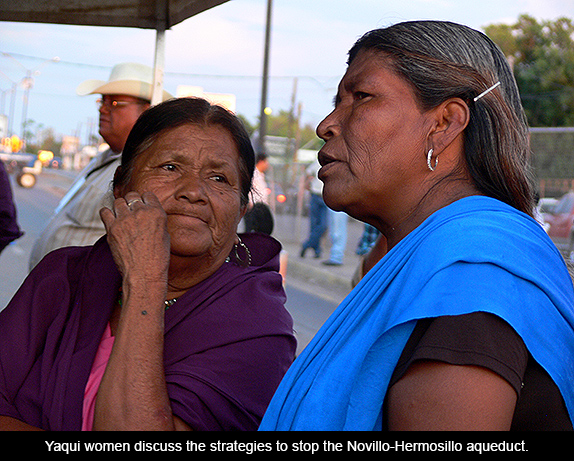