On August 19th, 2011 a uniformed Colombian police officer shot and killed sixteen year-old Diego Felipe Becerra who, along with a group of friends, was spray painting street art in north Bogota. The facts, murky then, are now the subject of an investigation into the shooting. According to those who were with him on the night of the shooting, Diego began to run as soon as he saw the police. That’s when the officer opened fire, mortally wounding Diego in the back. The version that the police would have you believe is that Diego was part of an armed gang of criminals who were trying to rob a city bus— thus justifying the police officer’s actions as defensive and appropriate

In the days following the shooting, the National Police offered up evidence to back up their version of the story. They claimed to have located a firearm and the supposed bus driver gave his testimony of the events on a popular Colombian radio station. However, subsequent investigations have shown that Diego wasn’t a criminal, nor was he carrying a firearm when he was taken to the hospital that night. These inconvenient facts lead one to question if the police’s official story isn’t just a huge cover-up —one that could involve high-ranking officials in the National Police in “justifying” the error that took the life of the young artist.

But the debate in Colombia about this case isn’t only centered on the cover-up, which in the best of cases, attempts to blur and obfuscate the actions of the officer, and in the worst of cases could constitute a criminal act involving high-level officials. It is also about the jurisdiction of the civil justice system. At one point in the case, the military intervened and took control of the investigation, but thanks to pressure from the Human Rights Commission in Colombia and a finding by the High Judicial Council (Consejo Superior de la Judicatura),, the case returned to the civil justice system. The timetable for its continuation, however, has still yet to be resolved.

The case of Diego Felipe is only one of the more than 1,700 documented homicides that have been perpetrated by police officers and the military over the last 27 years in Colombia. These often anonymous victims are known only as “false positives” or collateral damage in the efforts against terrorism and subversion, giving the impression that a certain number of deaths is completely justifiable.

In 2008 the media revealed a shocking scandal where poor youth from impoverished neighborhoods had been coaxed into accepting fake jobs (some legal, some illegal) by a complex web of people, which included members of the armed forces. Those who accepted the “jobs” were never actually employed. They were murdered and passed for fallen anti-government guerrillas so that the military could make their claim to economic incentives and demonstrate results of their operations in the “Democratic Security” policy of ex-President Alvaro Uribe.

In public debate over the homicides, diverse positions arise regarding whether the armed forces should have jurisdiction. These arguments never have anything to do with what the constitution says, and, in fact, look more like the kind of corruption and criminality that should be the subject of prosecution itself. The crux of the issue is beyond the debate about jurisdiction, however. What’s really at the heart of the matter is the sense of impunity that follows the military and police forces when they apply sentences that are not only lax, but are also handed down through a secretive process that gives rise to all sorts of irregularities and corruption.

Paradoxically, the military needs the support of the people to carry out its mission of fighting crime, but it generates mistrust through its actions. Colombia went ahead and finished 2011 by passing a controversial bill that strengthens the role of the military in the justice system. This law not only is a step backward for guaranteeing human rights, but it also opens a dangerous new path to impunity.

This is the other side to the “successful” model of fighting terrorism and anti-government groups that has been showcased around the world and that some want to export to places like Central America and Mexico. It’s the guiding influence in projects like the Merida Initiative.

But if not by force, how do we lower the levels of crime and violence that plague our countries? Colombia doesn’t only have the drug war model to offer the world; it is also home to initiatives that seek to connect at-risk youth to ways to regain self-esteem and to get them out of the only livelihood that doesn’t require academic credentials— crime.

A program called “Caring Legion” has connected with more than 2,000 youths from twenty violence-stricken areas in Colombia in the last eight years. The program, recognizing that inequality and the lack of opportunities are what push people into crime, helps to form young leaders through participation in art, music, and culture. This non-militaristic approach has not only been successful in raising spirits in the community and the country at large, but has also sparked a reduction in the number of violent deaths in the areas in which is has been implemented.

In the city of Barrancabermeja, located in the region that witnessed the rise of notorious 1990s paramilitary squads, a group of young people formed a peaceful organization named “The Fifth Commandment”. Named after the Christian commandment that declares “Thou shall not kill,” the organization has been a model of how a diverse group of people from different ethnicities, genders, sexual orientation, and political affiliation can work together to oppose violence. They stand together in conscientious objection against all types of recruitment, legal or illegal, because they believe that war cannot be a part of the country that they want to build. The Fifth Commandment emphasizes art and culture, and the idea that direct work with the community can rid them of the war and the violence. Their work is done voluntarily and in support of finding peace. Everything is done from the platform of “active non-violence,” taking a path that diverges from the passivity and helplessness that the proponents of violence try to force upon them.

But in Colombia, unfortunately, there are many enemies to peace, and harassment and fear are their best weapons. Fifth Commandment has been the recent target of the gang “Los Rastrojos (The Bearded Ones). This group started off as a paramilitary group and has also threatened other social organizations in Barrancabermeja, targeting them as “guerrillas,” “communists,” and “sissies” (see below). This is the same thing that has been happening elsewhere in the country where peace initiatives are harassed and pursued by different criminal gangs that are acting in zones where the guerrilla has been losing control, as they are battered by the military and Colombian government. It’s worth pointing out the recent operation that culminated with the FARC’s head man Alfonso Cano this past November.

Citizen support for the guerrillas has dropped precipitously. It’s not only because of the ongoing dramas of the kidnappings, but for the blind cruelty of using anti-personnel mines that mutilate and kill soldiers, peasants and children alike. The image of the altruistic and idealistic rebel has faded in step with their complicity in drug-trafficking and their perversions of a conflict that is approaching its 50th birthday. On the other side of the political spectrum, however, the extreme right has reduced every progressive citizen demand to “terrorism,” turning journalists, human rights defenders, social leaders, and even fans of the internet into “terrorists”.

The question that some figures in Colombian society have dared to ask—including members of the Catholic Church like the archbishop of Cali, Darío de Jesús Monsalve Mejía— is whether finding peace will require a total military victory over the so-called “terrorists” or whether reconciliation should arrive as a result of a national policy to overcome the deeper issues of inequality and impunity, guaranteeing better governance and institutional legitimacy.

It’s hard to believe that a country that condemns its working class youth to be either victims or victimizers, before the indolence of the privileged classes, will find an exit to its historic violence through a military conquest. Especially when the same military campaign has led to the birth of criminal organizations since the demobilization of the paramilitary in 2005. Today these organizations run a collection of scams: from controlling public finances with puppet politicians, to trafficking, to extortion of merchants and shopkeepers.

The security that Colombia provides today seems like something alien and long lost for the many citizens that suffer from the daily fear of organized crime and homicide. Last year there were a total of 13,155 murders as well as 74 arms seizures per day. The “advances” in security mostly came about in areas that were bloodily pacified for the exploitation of natural resources and foreign investment, generating the displacement of more than 3.8 million people, one hundred thousand of whom were displaced violently just last year.

Finding ways to provide opportunities for the thousands of young Colombians who are swept into the military and could otherwise be rebuilding the credibility of the country is a great challenge in the long journey that still lies ahead in finding true peace. The impunity in cases involving members of the armed forces is only the reflection of a weak government that creates victims instead of protecting them.

That same vital force of young people who are looking for alternative measures and space for real participation in the reconstruction of the country demand that institutional action be up to their expectations. They demand something more than education for the privileged and a model of citizenship that reduces each person to the worth of their production, negating everything about their creative capacity.

Perhaps the most significant social movement of the past year was led by public university students. Opposing a structural reform of higher education that was looking to give private capital a greater role in the system, the students called a meeting to discuss a change in their strategy (which had been called “belligerent” by the sensationalist media). They decided on a radical proposal—showing more affection towards the police. In an “abrazatón,” dozens and dozens of unarmed students were photographed hugging the police.

This strategy forced the media to not only focus on the damages and outrage of the marches, but also on a few of the obvious questions about the future of public education in the country. Finally the government removed their proposal, postponing, at least for the time being, what seems like an imminent transformation of the education model. The question of how to guarantee peace in a country of inequality and marginalization remains unanswered.

Alex Sierra R. is an anthropologist who has also worked as and independent investigator and consultant on issues such as human rights and international cooperation efforts for development and public policy in Colombia. He has worked in active conflict zones and with vulnerable communities in Colombia for the last twelve years. He is a monthly columnist with the Americas Program.

Resistance and Repression in Oaxaca 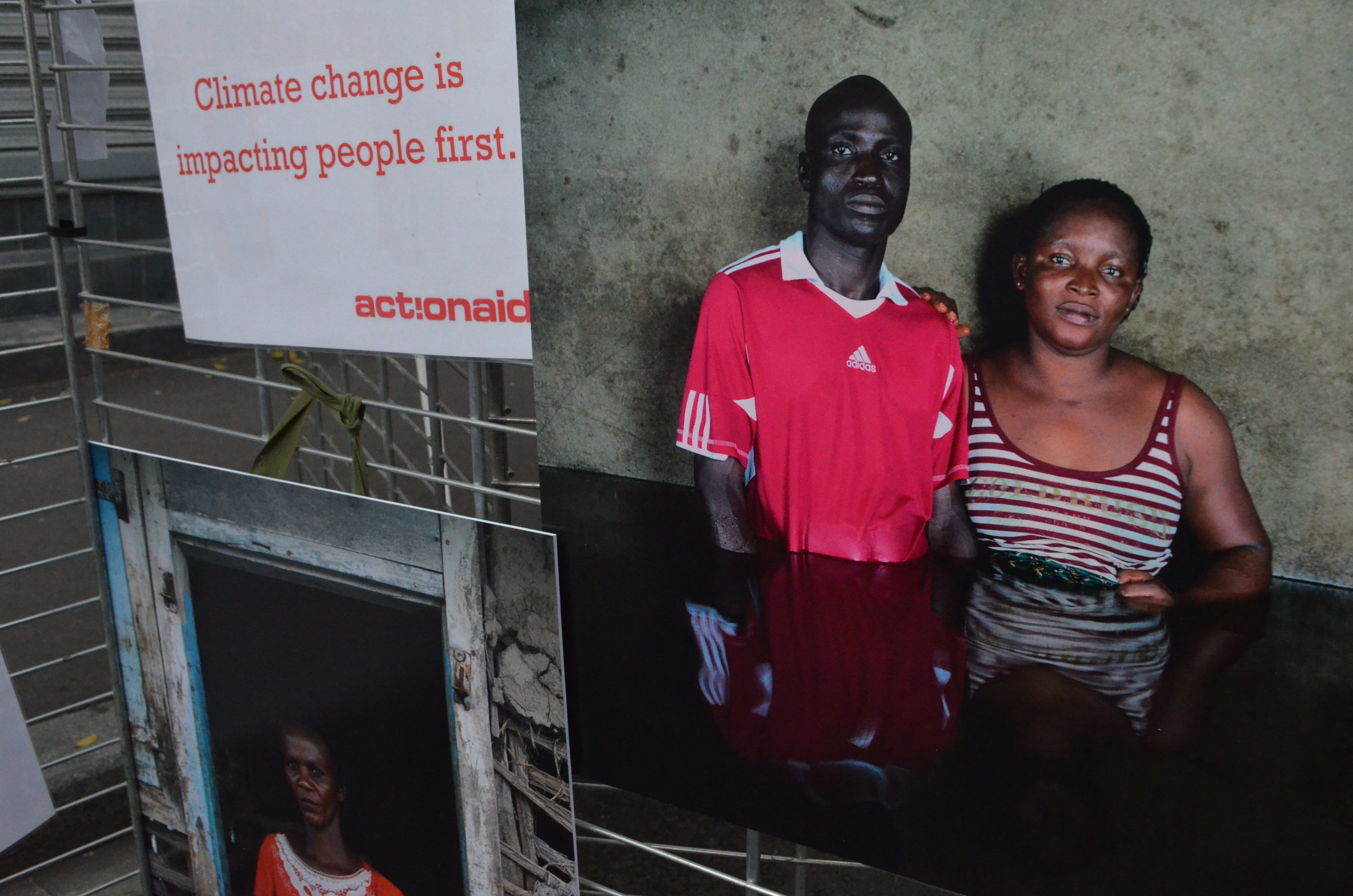