This week three things happened simultaneously, worlds apart. From the border city of Ciudad Hidalgo, Mexico, about 30 Central American mothers set out to look for their migrant children who had disappeared in their journey north through Mexico. Alive or dead, imprisoned or free, victims of organized crime or of the security forces themselves, they have no idea. They only know that their life’s mission is to find their children.

Meanwhile, in Puerto Vallarta delegations of the member countries of the United Nations met under the slogan of the “Global Compact for Orderly, Secure and Regular Migration”. The purpose of the meeting was to follow up on the September 2016 New York Declaration that states: “We declare our profound solidarity with, and support for, the millions of people in different parts of the world who, for reasons beyond their control, are forced to uproot themselves and their families from their homes”, its determination to save lives, and a commitment to “combat the exploitation, abuse and discrimination suffered by many refugees and migrants.”

And finally, in Washington DC, Donald Trump withdrew his government and hence his country from this non-binding pact, declaring that its principles are “inconsistent with US immigration and refuge policies and the immigration principles of the Trump government.” Indeed, solidarity, saving lives and eliminating exploitation and abuse are not concepts anyone would associate with Trump’s immigration policy. According to the official statement presented to the UN,  the Trump administration also argued that its immigration policies are not subject to discussion in any international institution or forum, since they are a matter of national sovereignty.

The lines of battle are drawn in what has already become the defining struggle of the 21st century. As the humanitarian crisis deepens, states debate between a model of national security that represses the majority and a model of human security that prioritizes them. In many countries, racism and xenophobia have openly taken over government decision-making bodies. And the tragedies multiply every day.

The meeting in Puerto Vallarta, even without the U.S., reflects the many contradictions. Protesters outside the official meeting warned that the pact could end up affirming mass deportation policies and lead to more deaths and disappearances. The purpose of seeking more humane strategies in accordance with human rights conventions could be abandoned if “border control” takes over the agenda of state policies, with its clear fascist overtones.

For the Central American mothers, crossing borders from their countries of the Northern Triangle and following the migratory routes that many of their sons and daughters followed is the hope of finding them. Some have been missing for decades. The Caravan of Mothers, in its thirteenth year, has found more than 270 missing relatives. This year isn’t an exception. Witnessing the reunion between a mother and  daughter after years of not knowing, is a very emotional moment and a reminder that public policy and laws should promote family unity and loving bonds between people–not destroy them. Safety is knowing that your children are safe, and that the people you love do not face hunger, death threats or abuse. National governments, before seeking to expand their power and interests, must fulfill this basic obligation.

In this challenge, all the governments on the regional transnational migration route – from Central America to the United States – have failed. Migrants flee Guatemala, El Salvador and Honduras, “where economic insecurity, combined with the impact of mega-projects of extraction of minerals and other resources, create a situation of structural violence and forced displacement. This economic insecurity occurs in a context of acute violence in these countries, which have the highest levels of homicide and gender violence in the world”, as stated in the communiqué of the Mesoamerican Migrant Movement that organizes the caravan.

Upon arriving in Mexico, migrants are victims of extortion, robbery, rape, disappearance, murder, general violence and sexual violence, kidnapping and human trafficking, at the hands of organized crime, but also by corrupt authorities who commit crimes with impunity.

They travel along a circuit of human rights violations. If they make it to the United States, their undocumented status increases the vulnerability and the difficulty of exercising the rights and freedoms that other people take for granted – a situation that is getting worse under Trump. If they are detained and deported, they often have to leave behind family members and spend long periods in jail. The they face an uncertain future at best sent back to countries some can barely remember.

So while officials debated at the UN in the tourist paradise of Puerto Vallarta, and Donald Trump unveiled the latest anti-immigrant measure in his strategy of forging a United States by, for, and of billionaire white men, thousands of migrants went unheard. In many ways, they are the ones who suffer the first signs of distress in a global breakdown–they are refugees from tyrannies and vanishing democracies, from natural disasters and environmental destruction, from inequality and want. Many more will follow and their plight will become more difficult to ignore. Not even tanks and controlled media will be able to hide the numbers or their rightful demands.

The refusal to see their reality with a modicum of empathy not only hurts migrants. It erodes the fundamental values of the kind of society that we all want and need. 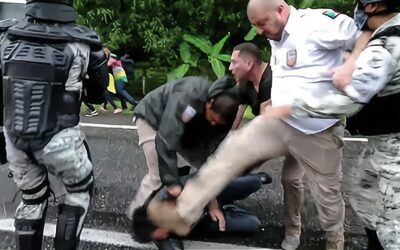