Hundreds of people streamed onto Avenida Reforma from Mexico City’s Museum of Anthropology, further proof that Mexico’s peace and justice movement has the capacity to draw citizens out to protest the drug war. Protesters demanded that the Mexican Congress throw out proposed reforms to the National Security Law that is designed to provide legal underpinnings for continuing the war on drugs strategy launched by President Felipe Calderon in December of 2006. Movement leader, poet Javier Sicilia, marched alongside the relatives of victims in white t-shirts, followed by university students, indigenous groups, an especially lively group of jaraneros (playing a traditional, guitar-like instrument called a jarana), citizens and press. The trail of several thousand marchers snaked up the downtown avenues to the gates of the Presidential residence, Los Pinos. Several veterans of Mexico City demonstrations commented that security forces had never allowed them to approach the entry to Los Pinos, let alone with so little security.

But this is a movement that has defined itself as a interlocutor, rather than an adversary, to power. The congregation listened quietly to Julian Le Baron’s warning against complacency, in his now-familiar, lilting Chihuahua accent. He recounted the events leading up to the kidnapping of his little brother and the murder of another brother and his friend, addressing the crowd from atop a truck. His speech was followed by the customary moment of silence led by Sicilia. The usual jeers and anti-government slogans were notably absent.

The march then wound back down the hill and came to a stop in front of the Senate building, after being joined by hundreds of marchers from the “No Mas Sangre” movement. Both houses of Congress have approved the national security reforms “in general” (meaning specifics will still be debated). Since the reforms were the main subject of the dialogue with the movement, The movement views approval of the measures in the midst of dialogue  as a betrayal of terms. However, Sicilia announced that a liaison committee will renew dialogue with the legislature this Wednesday.

Representatives of the peace movement stated the objections to the National Security law in a flier, summarized below:

1) It legalizes presidential decisions to attack insecurity with repressive measures that react to symptoms rather than address causes;
2) It is unconstitutional since it redistributes public security and national security functions among the Armed Forces and the police without adequately defining both.
3) The Armed Forces would be allowed to coordinate public safety activities when the constitution clearly only allows them to participate as auxiliaries in crisis situations.
4) The incorporation of military personnel in public safety opens the door to substitute local and state authorities for federal Armed Forces and security personnel, which affects states’ rights and sovereignty.
5) Federal security officials can declare states of exception, which permit authoritarian government.
7) Military personnel could be tried in civil courts only when the the military decides it is appropriate.

My analysis of the National Securit 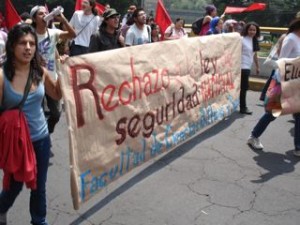 y Law coincides with this analysis. I believe there are very serious flaws not just in the particulars of the reforms but in the entire framework. Experts within Mexico, including the National Autonomous University (UNAM), have been working on models of a law of citizen and human security that replaces the Bushian concept of national security, and takes a look at the causes of insecurity in communities and long-lasting solutions. By promoting Calderón’s out-dated and repressive National Security law, with its obvious similarities to the Patriot Act in the suspension of civil liberties, the Congress has pre-empted the valuable efforts of the citizenry and academic experts to devise a more democratic alternative.

The proposed reforms deepen, rather than resolve, the confusion between police public safety functions and the army’s national defense mandate. This opens the door even wider to corruption of the armed forces, human rights violations without access to justice, and the militarization of Mexican communities. It also opens the door wider to Pentagon involvement under a pseudo-legal regimen that is constitutionally prohibited (for good reason) in the United States and most other countries and violates fundamental and constitutional precepts of national sovereignty in Mexico.

Most of the event in front of the Senate didn’t focus on the legal reforms to the National Security Law, but told the stories of the victims, by the victims. This has come to be the hallmark and the moral strength of the movement. The cases of assassinations, disappearances and abuses reflect an almost even split between suspected cartel involvement and security forces’ involvement, among a large number of unknown causes since most cases have never been investigated. The common denominators are pain and frustration with “a bunch of corrupt judges”, a legislature that “doesn’t know what it’s like to lose a son or daughter to this absurd violence” and government negligence “that is just the new way to cover up corruption”, in the words of the growing number of victims. Diana Gomez, an analyst with the Americas Program and a victim whose father, Jaime Gomez, was disappeared and murdered in Colombia, spoke of the links between Plan Colombia and Plan Mexico, or the Merida Initiative, imposed by the U.S. government. Her father, she noted, was killed in the context of the “Democratic Security” plan of the U.S. and Colombian  governments.

“Colombia is not the model to follow”, she warned. She pointed out that militarization under the pretext of the drug war in Colombia led to the death of her father and thousands of others, including the “false positives” killed by the military, with many more disappeared and displaced.

Gomez is a leader of the organization Sons and Daughters for Remembering and Against Impunity. Her words as a victim, as an academic expert and in solidarity with the Mexican movement brought into focus the larger picture of the drug war. This is a model that benefits powerful interests at the expense of the people, especially the poor and opposition leaders. And it is a model that is being actively promoted by the U.S. government despite evidence of its failure to achieve its stated objectives.

As the dialogue is renewed and part of the Mexican movement engages Congress in a new round of dialogue, others are organizing public education and protest events around the construction of the U.S.-funded international police academy in Puebla, a Forum Against Militarization, and student discussions.

It will be interesting to see where the many initiatives for peace lead in Mexico’s unprecedented protests against the drug war.

As criticism of the drug war grows deeper so does the possibility to build non-violent alternatives. If the Mexican peace movement succeeds in stopping the drug war and reversing trends toward rising violence and human rights abuses, its communities wills suffer less bloodshed. And the rest of the world will have an example to point to, of how to reject military/police states in favor of security based on the guiding principles of human rights, citizen participation and strong democracy.

Zapatistas: 18 Years of Rebellion and Resistance