The human column files into Avenida Insurgentes in the south of Mexico City and marches toward the national university. It’s neither the largest nor the smallest march this city has seen, accustomed as it is to demonstrations that voice grievances and tie up traffic nearly every day.
But it’s immediately evident that there’s something different about this march. The marchers aren’t for the most part seasoned political activists or labor leaders. They are thousands of young people, men and women,  who have come out of their classrooms and homes to demand an end to the violence that has become the hallmark of the society they inherit.
For them, the war on drugs launched by President Felipe Calderón has created a bloody present that portends an uncertain and risky future. Besides the daily violence, today’s young Mexicans – as they state in the declaration read on Feb. 17 – live in “a society strangled by poverty, injustice, inequality, unemployment, corruption and indifference…”
The No More Blood protest is made up of contingents of university students from across the city, preparatory school students and women organized against femicides that have increased under the cover of drug war violence.  Other groups that have confronted militarization and repression by the state or paramilitary elements linked to it march with the students: the Mexican Union of Electricians, the National Coalition of Education Workers, indigenous Triquis from San Juan Copala in Oaxaca, among others.

Dark-suited government officials watch the young men and women with obvious disdain. They speak in hushed tones on their cellphones while following the marchers, noting the “property damage” caused by spray-painted messages along the route. Plainclothes police officers walk hurriedly alongside the protesters, looking for problems real or imagined.

But there are no acts of violence. This is, after all, a march against violence. The march’s short route begins at the Parque de la Bombilla, where for years former president Álvaro Obregón’s dismembered arm was publicly displayed–well before the war against the narcos made the public exhibition of body parts fashionable. It ends up in the explanade of the National University, and along the way there isn’t not a single broken window, not a single rock or ugly epithet hurled. Instead, the streets fill with stencils, graffiti against militarization, protest art and flash street theater performances. “No more blood”, images of a soldier with the words “Call him by his name: MURDERER”, “No more femicides” are the slogans that demonstrate the participants’ commitment to non-violence in the face of state violence.

More than the mass media, it’s thanks to the Internet and social networks that the budding peace movement learns what’s happening in the rest of the country and organizes. Ciudad Juarez, the government’s chosen war laboratory and home to Operation Chihuahua, figures prominently in the Mexico City march. The city has become Calderón’s Frankenstein, an uncontrolled bloodbath that has made Juárez the most violent city in the world and a dangerous environment for young people.

The marchers chant in solidarity with the border city. “Juárez is not a barracks, get the army out!” Women from Chihuahua dressed from head to toe in black put together a makeshift shrine on the sidewalk with a magazine bearing the image of Marisela Escobedo, candles and miniature coffins. Escobedo was a tireless anti-femicide activist in Juarez, murdered last Dec. 16 while protesting the unpunished murder of her daughter in front of the Government Palace. Another stencil demands the “Safe return of the Reyes Family”, a reference to three people kidnapped on Feb. 7 in a military- controlled area, all relatives of Juarez Valley anti-war organizer Josefina Reyes. A spraypainted message makes an anonymous promise to the fallen activist: “Josefina, your fight is not in vain.”

The march was organized by the Metropolitan Coordinator Against Militarization and Violence, a group formed after the Federal Police shot student Darío Álvarez on Oct. 29 at the International Forum Against Militarization and Violence in Ciudad Juárez. It is part of a growing network of student and citizen anti-militarization organizations that demand an end to the war against narco-trafficking and seek non-violent ways to confront organized crime and rebuild the frayed social fabric. The movement asserts that the war leads to militarization and violence, and that the resources dedicated to the losing fight against drug-trafficking come out of social spending. One of the most popular chants is “We want schools, we want jobs, we want hospitals, we don’t want soldiers.”

First-year UNAM student Federico explains: “Our demands are: no more blood, end the war, and send the army back to its barracks. They tell us that this war is the only way to confront organized crime and that we’re winning – and I’d like to ask the President, “what country are you living in?”
Luis, another marcher from UNAM, says that students from the capital have established contacts with student groups near the border and they see the war’s impact in the most affected communities. He says that the university students must be the first to organize to bring an end to the violence.
It is sadly the case that in some places the situation is approaching “youthicide” – the selective killing of young people. It’s difficult to ascertain the number of youths killed in the drug war because their deaths are mixed up in with the government’s invented figures that claim that 90 percent of victims are involved in organized crime. The statistic is presented without distinguishing age or clarifying how they determine who’s involved in crime without investigations. The march’s young men and women reject this official justification of their peers’ murders; throughout the march they shout: “Once again, the same story. We’re not assassins, we’re students!” It was Calderón’s comment that the youths massacred in Villas de Salvárcar, Ciudad Juarez had links to organized crime that provoked the indignation of the community and gave birth to the young people’s movement against the war.

The statistics talk about at least 7,000 youths and children killed in three years, and of states where the youth murder rate has increased three to five times since the start of the war. According to the government, more than half of those killed whose ages are determined are youths.

The graffiti trail leaves a graphic picture of how bad the situation is: One message in black exorts, “Get organized, before they kill you.” For many of the young protesters who have come from the border, the advice doesn’t sound exaggerated and is in fact the main reason they came. In Juárez, for example, almost everyone has friends or acquaintances that have been killed. Another banner reads: “Why are they killing us if we’re Latin America’s hope?”

Several messages criticize the role of the U.S. government for fomenting the largest market in the world for illegal drugs and being the primary source for the cartels’ weapons while promoting the war in Mexican territory. “The United States provides the guns, the Mexican people the dead,” reads one. Some speakers express their rejection of the Mérida Initiative, the US aid program for Calderón’s war on drugs.

At the end of the march, speakers memorialize the students and activists killed in the war: Bernardo, from the University of Sinaloa; Darío Álvarez, shot by the Federal Police, Marisela Escobedo. While the war’s grim tally is read through megaphones, the majority  stand still watching the small flames of thousands of candles flicker along the explanade of UNAM’s Rectory. Everyone has contributed  their candle in accordance with the grand plan – a design drawn on the tiles indicating the placement of each one with a chalk ‘x’.

By the time the last candle is placed, a vast field of light has taken shape and with effort one can make out large letters reading “END MILITARIZATION”. Behind it, they say the hundreds of candles form a map of the country, but without a bird’s eye view it is simply a sea of light wavering in the darkness.
It’s probably too soon to evaluate the political impact of the march in Mexico City or its future prospects. But, as one student from Ciudad Juárez said, Feb. 17’s march was a “good start” for a movement just being born. 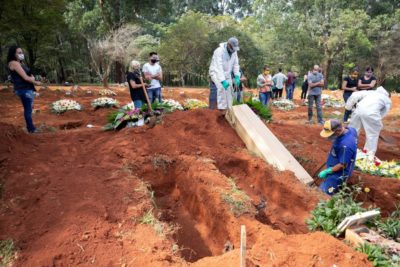