Monsanto is an exception to the rule. Usually even the worst things in life have some positive aspect, but the actions of this multinational producer of genetically modified organisms and toxic pesticides are so evil that it’s become an easy mark for global wrath toward capitalist corporations that are ruining the economy, biodiversity and people’s health.

Worldwide demonstrations against the company took place following the “Monsanto Protection Act” passed by Congress and signed into law by President Barack Obama in March1  and the recent decision by the U.S. Supreme Court in favor of patents on living organisms2 Millions of people gathered across the world on May 25, outraged by the complicity of the governments with the interests of the transnational corporation.

Monsanto has immense power to corrupt. A company that last year grossed more than $14 trillion dollars3 and spent $6 million in lobbying4 can be very convincing for the U.S. Supreme Court or the president, not to mention its influence over Mexican government officials and legislators. Portrayed as a technologically innovative company, it is a monopoly whose objective is to control at all costs food agro-food production by diverting laws and manipulating patents to legalize looting peoples and nations.

But the biotech giant, based in St. Louis, Missouri, is in the eye of the hurricane since studies came out recently regarding the dangers posed to human health and life by genetic engineering of food. Last year a study from the University of Caen in France documented the effects of genetically modified (GM) corn NK 603 and the weed killer Round-Up or Faena (glyphosate) on mammals, both products made by Monsanto. Rats fed with these ingredients for two years, in doses equal to their exposure in the environment, developed breast cancer and chronic hormonal, kidney and hepatic dysfunctions, as well as premature death.

Just last April, scientist Stephanie Seneff of the Massachusetts Institute of Technology and an independent colleague, Anthony Samsel, concluded that glyphosate, the most widely used weed killer in the world, interferes with the biosynthesis of nutrients in the human digestive apparatus and is at the root of fatal diseases associated with the western diet: gastrointestinal illnesses, obesity, diabetes, cardiac disease, infertility, depression, autism, cancer and Alzheimer’s.6

Concerned for their health and that of their children, Mexican activists in favor of healthy food and in defense of maize and the environment responded to the global call for a day against Monsanto. They organized the “Carnival of Corn” in Mexico City on May 25 and demanded that President Enrique Peña Nieto refuse to be bought or pressured by the agrochemical giant and protect the well-being of the population.

Hundreds of young people from political, social and environmental organizations and artists’ collectives held cultural events and paraded from the Palace of Fine Arts to the Monument to the Revolution. It was a festive atmosphere, with drummers and street theater, music, performance and  dance. Handmade signs ranged from the humorous to the furious: “Monsanto, Go home! (Hell)”, “We are not your f*** scientific experiment”. The most popular hash tag in the social networks was #FueraMonsanto  (#MonsantoOut)

The street festival caught the eye of vagrants and passers-by, attracted by the joy and color of the artistic expressions. The slogans in defense of food and culture broadened the traditional repertory of march chants. “Queremos frijoles, queremos maíz, queremos a Monsanto fuera del país” (We want beans, we want corn, we want Monsanto out of our country”) Youth comprised the overwhelming majority of participants. Laura Carlsen, director of the Mexico-based international think tank the Americas Program, noted “a new generation of activists that reject GMOs and is convinced corporations like Monsanto are a threat–not only to our food but to life on this planet. On the global scale, it’s really important the way in which these movements that started in several countries are finally coming together. In the United States people are beginning to react, there are many grassroots networks. They´re not just NGOs but citizens that are organizing and could even annul the infamous Monsanto Protection Act. It’s a battle that has a lot of symbolism and both sides have a lot at stake.”

Mexico is the global center of origin of maize.  Even so and defying the warnings of scientists, producers and consumers, the past administration of Felipe Calderon authorized open-air cultivation of GM corn in the experimental and pilot phases. In 2011, Monsanto and other transnationals filed for permits to cultivate commercial GM corn on more than a million hectares in Sinaloa and Tamaulipas in the northern part of the country. Apparently the government did not respond to the requests during the allotted time period. But Monsanto raised the stakes this season, applying in March for more than 11 million hectares for commercial cultivation in the northern states of Chihuahua, Coahuila and Durango.7

Mexican officials and legislators are inclined to favor Monsanto’s petition. Since 2005 they have been paving the legal road for the invasion of GM crops. Only broad and organized public opposition and concerns about the political cost of the move have kept them from speeding up the process.

By organizing from the grassroots, Mexico has made some positive steps forward, including local and national efforts to establish the conditions for food sovereignty,  community seed banks to preserve native seed,  protection and consolidation of production for family and community needs in areas not controlled by Monsanto, and an increase in public awareness of the strategic importance of defending native corn.

For the May 25 demonstrators it’s clear that accepting Monsanto’s designs would be a frontal attack on food sovereignty, conservation of the agro-genetic wealth of Mexican corn varieties, and the right of peasant farmers to maintain their important labor as food producers. In short, an attack on the right to life.

Over this year, actions to resist Monsanto and GM corn have multiplied in Mexico. A nine-day hunger strike staged at the foot of the Angel of independence statue in Mexico City in January by the National Union of Regional Autonomous Peasant Organizations (UNORCA, by its Spanish initials) brought public attention to the demand to block GM corn production. It was followed by a large march on Jan. 31.

The movement Sin Maíz No Hay País (Without corn there is no country), the Mexico chapter of the Union of Concerned Scientists and Greenpeace Mexico, among others, have made public statements, organization demonstrations and carried out high-impact actions in defense of native corn. Greenpeace recently hung a huge banner reading “NO GMOs” on the downtown monument called the Tower of Light– a structure notorious throughout the country for its scandalous cost overruns and considered a monument to governmental corruption.8

The activities have been inspired by deep concerns for the health of the people and the environment, based on verifiable information obtained from careful studies carried out by respected scientists without a conflict of interest.

But the more evidence that emerges showing the dangers or possible dangers of Monsanto products, the more the company spends on efforts to slander the messenger, defame the scientists who carried out the studies and deceive the public. A decent corporation would respond with concern, commission unbiased investigations and withdraw products from the market to protect the population. Monsanto is not a decent corporation. The one merit that can be attributed to it is that it has sparked a dynamic global movement against it that is demanding accountability for who grows our food and how they do it.

Alfredo Acedo is Director of Social Communication and adviser to the National Union of Regional Organizations of Autonomous Small Farmers of Mexico and a contributor to the Americas Program www.americas.org on food and agriculture issues. 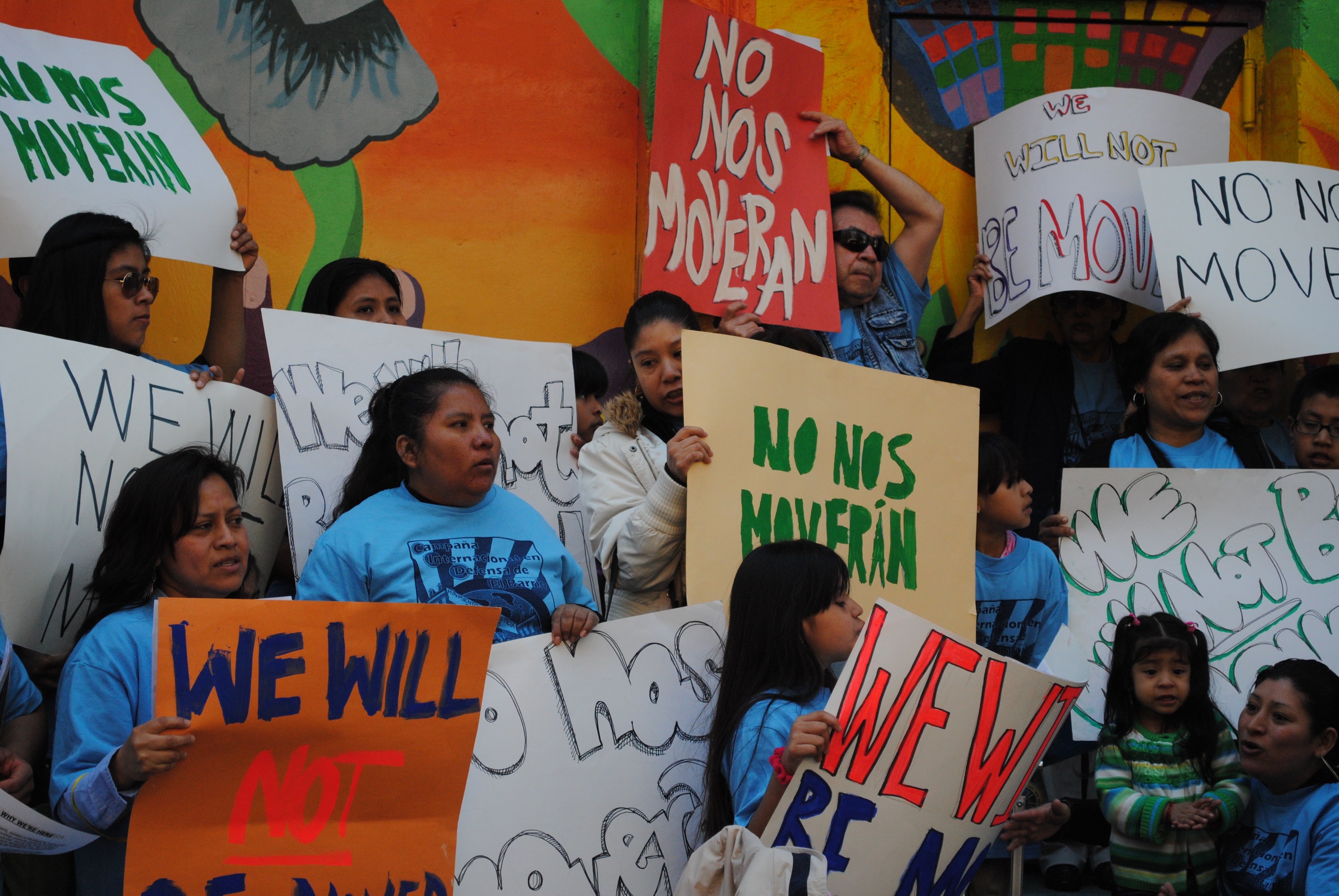 New Film: Movement for Justice in El Barrio at the Women’s Freedom Conference