Mexico’s President Enrique Peña Nieto has gone where no other Mexican president has dared to tread since the nation’s wildly popular oil nationalization in 1938. Late last year, he pushed through an historic measure to reprivatize much of Mexico’s energy sector.

The constitutional reforms to grant private companies rights to oil and gas exploration and exploitation passed last December. Peña Nieto delivered the package of secondary legislation that establishes rules and procedures to the nation’s Congress April 30. His Institutional Revolutionary Party (PRI) says the measures could be approved by June, removing the last legislative hurdle to implementation.

Mexican government officials reject the term “privatization” for the proposed scheme. When oil and gas is in the ground (and has no monetary value), they say, it belongs to the Mexican people; when it is extracted and worth millions, then it belongs to transnational corporations. They also note that Pemex, the state energy company, is not being sold outright, although they admit that many of its assets could be sold in the future. Meanwhile it will lose some concessions it is currently working, as well as rights to most future sites.

Although the laws are expected to pass through an alliance between the PRI and the conservative National Action Party, the controversy will not end there. National pride, concerns about lost sovereignty, anti-neoliberal sentiment, and an aversion to foreign oil companies have combined to form massive opposition to the government’s privatization plans. Opponents are collecting signatures to put a referendum on the reforms on the ballot in the July 2015 federal elections. If they do, some polls show they have a good chance of winning.

The privatization and break-up of Pemex has long been a chief aspiration of neoliberal planners in North America. Promoters of the “free-market” model and supporters of NAFTA—including the World Bank, the State Department-funded Wilson Center, and the Mexican business association Coparmex—have predictably celebrated the reforms.

The Mexican government argues that Pemex is ailing, production is falling, refining and high-tech extraction capacity is low, and corruption is rampant. No one contradicts any of these points. However, if Pemex is in dire need of help, the government has no one to blame but itself.

For years, critics have accused successive governments of milking Pemex. The para-state company consistently provides nearly half of Mexico’s national budget, with 53.8 percent of its $123 billion in net sales going to the federal government in 2013. Experts have noted that a thorough overhaul of Pemex could achieve the goals set forth by privatization supporters. But critics claim that the government has purposefully weakened Pemex by failing to invest its revenues in future operations and expansion, setting the stage for privatization while running up a $63-billion debt as of the end of last year. Opponents have presented a counterproposal to reform Pemex that does not amend the constitution.

Another specious argument in the privatization debate is the idea that the private sector will automatically reduce corruption. This defies public knowledge of how transnationals operate in the world and in Mexico itself. Shell, among other companies, is facing a lawsuit from Pemex for purchasing Mexican condensate smuggled by organized crime groups. Oceanografia, a private Mexican company subcontracted by Pemex, is under investigation for fraud for using its association with the state-owned company to cheat Citigroup-Banamex for bad loans worth hundreds of millions of dollars.

As Bloomberg reports, “Chevron, Shell, Exxon Mobil Corp., and Repsol SA are among major producers that have expressed interest in Mexican oil fields.” The environmental and social records of these companies are dismal. Moreover, the joint Shell-Pemex venture at Deer Park—which officials hold up as an example for the future—has been criticized for a lack of transparency and minimal technology transfer, another supposed selling point of the reform.

The Mexican government has promised transparency and anti-corruption mechanisms in the reforms, including sanctions against corrupt companies. But given the failure of the Peña Nieto government to attack Mexico’s already rampant corruption, skeptics abound. With oil resources in foreign hands, Mexico will have less direct oversight and capacity for intervention in operations.

A related concern is what the entry of these powerful corporations means for Mexican sovereignty. Once foreign companies have gained massive concessions to oil and gas exploration, they will have far greater control over Mexican territory and resources, acquiring tremendously more political and economic power. The Oscar-winning director of Gravity, Alfonso Cuarón, expressed this concern in an open letter to Peña Nieto. “Oil transnationals in the world have as much power as many governments,” he wrote. “What measures will be taken to ensure that our country’s democratic process is not trapped by illicit financing and other pressures from powerful interests?”

U.S. oil and financial interests will undoubtedly benefit from greater access to Mexico’s national resources as well. This creates compelling incentives for corporations—and the government officials in league with them—to actively promote these interests in Mexico. According to the Snowden leaks, the NSA ran a spy operation on Pemex, presumably to give U.S. transnationals a competitive advantage and to assist with U.S. strategic energy planning.

Mexico appears to be banking on a fossil fuel boom built on the rapid expansion of deepwater drilling, shale oil development through fracking, and refined extraction techniques in old sites—all fueled by foreign investment.

There are so many reasons that this is a bad idea, it’s hard to know where to begin.

First, fossil fuels are non-renewable. The Mexican plan mortgages future generations through a more intensive depletion of the country’s oil and gas reserves. Cuauhtémoc Cárdenas, Mexican politician and son of the president who nationalized Mexico’s oil, asks in a recent newspaper article, “Where is a rational policy for managing reserves that gives security to the country in the long term for a resource that is finite and should be protected from the natural ambition, some would say, to loot reserves only to then abandon the oil fields, like happened in the past?”

Second, the social and environmental impact of fracking on northern Mexico would be devastating. Arid Northern Mexico has already suffered water shortages that have sparked conflicts. In some places, large-scale agricultural and mining operations have covertly partnered with organized crime to take over local water supplies. In the border state of Nuevo Leon, preliminary reports warn that fracking could wipe out traditional cattle ranching in the region and threaten the water supply for basic human consumption. Scientists warn that fracking would also cause an increase in seismic activity.

As U.S. imports flooded in under NAFTA and foreign investment bought off or broke down production chains, organized crime made unprecedented inroads in the region. And after the “war on drugs” escalated in 2007, its operations became uncommonly bloody. In a recent report, researcher Victor Quintana concludes, “The drastic transformation of public agricultural policy, brought about by structural adjustment programs and the trade opening, especially NAFTA, generated the conditions for the emergence of the many forms of violence we see in the Mexican countryside.” He cites impoverishment, displacement, reduction in social programs, and reliance on the global market among the reasons. All signs indicate that the oil reforms will exacerbate this situation.

Finally, pouring that additional oil into the global market will do double damage through climate change. The land, sea, and atmosphere will suffer irreparably from the proposed goal of doubling Mexican crude oil production from 2.4 million barrels a day to twice that.

As Mexico makes plans to go all out in production, the global pendulum is slowly swinging in the opposite direction. Although the fossil fuel industry has so far managed to block real measures to reduce emissions and move toward conversion, protests against the role of fossil fuels in climate change have intensified as the evidence against them becomes more damning. Students in the United States are mounting an increasingly effective fossil-free campaign to divest from fossil fuel companies. Environmental disasters waiting in the wings of the shale boom will undoubtedly wake up more citizens to the urgent need to move to another energy model.

Even if the secondary legislation passes, widespread opposition—and the possibility of a referendum to repeal the privatization—creates an unstable panorama for investors. Diana Villiers Negroponte, a fellow at the Brookings Institution and a proponent of the reforms, confirmed this in a January interview. “I doubt that any international company will be ready to invest until after that referendum,” she said.

Other questions cloud the future of the reforms as well. One regards the ability of transnationals to “book reserves” in Mexican oil contracts despite not actually owning the oil—which the Mexican government insists, however lamely, will still belong to the Mexican people. An article in Forbes last year quotes Deputy Energy Minister Enrique Ochoa saying, “The plan is that companies will be allowed to register the economic interest of the risk‑sharing contracts under SEC rules that allow converting that value into volume while the state maintains full ownership.”

To many Mexicans, it sounds like a euphemism for privatization. But investors can never be too careful.

Another lingering question is just how interested foreign companies will be in Mexico. In just the past few years, U.S. oil and gas production has surged due to fracking. Bloomberg reports that “By 2016, U.S. crude production will expand to 9.5 million barrels a day, the highest since the peak in 1970.” The pressure for finding new fields abroad has lessened considerably as oil companies are up to their elbows in Texas and North Dakota shale oil. The U.S. boom also means Mexico’s most important market is slipping away.  The Wall Street Journal reports that U.S. imports of natural gas and crude oil have fallen 32 percent and 15 percent, respectively, in the past five years. For the first time in decades, in fact, Mexico itself has become a net importer of U.S. petroleum products.

The Peña Nieto administration has launched a multimillion-dollar publicity campaign to promote private energy investment. It has promised that gas prices will decline in a maximum of two years, that Pemex will create 2.5 million jobs for Mexicans in the next 10 years, and that GDP will grow by 1 percent before 2018.

But will future generations reap those benefits? Mexico is confronting the challenge in precisely the opposite way of some of its southern neighbors. Bolivia nationalized its own oil industry in 2006. Despite dire warnings of capital flight and economic collapse, the Bolivian Center for Research on Labor and Agrarian Development (CEDLA) in 2012 found that six years after the revenue-sharing reforms, foreign companies have not left, their profits have remained steady, and the state has increased annual hydrocarbons revenues—from an average of $332 million prior to nationalization to more than $2 billion after. The money has been used for social programs that have decreased inequality in the impoverished Andean nation.

There’s another, semi-hidden layer to Mexico’s oil privatization. What both the Mexican government and the private companies covet in Mexico’s privatization scheme is not so much the oil flow as the capital flow.

The Wall Street Journal reports, “Much of the growth in fossil-fuel production comes from companies that need to sell shares, take on debt, or sell assets to plug a gap between spending and their revenue. According to an estimate by Barclays PLC, 50 major U.S. oil and gas explorers needed to raise $50.3 billion last year to close that gap. ‘The dollars needed have never been larger,’ said Maynard Holt, co-president of Houston-based investment bank Tudor, Pickering Holt & Co. ‘But the money is truly out there. The global energy capital river is flowing our way.’”

As capitalism’s growth imperative pushes speculation toward the next financial meltdown and fossil fuel production toward planetary destruction, Mexico’s political and economic elites are eager to jump in the game.

It was never about the public good. Underneath the rhetoric, it’s about making sure that the “river of capital” flows into the pockets of power.

Laura Carlsen is director of the Americas Program www.americas.org. 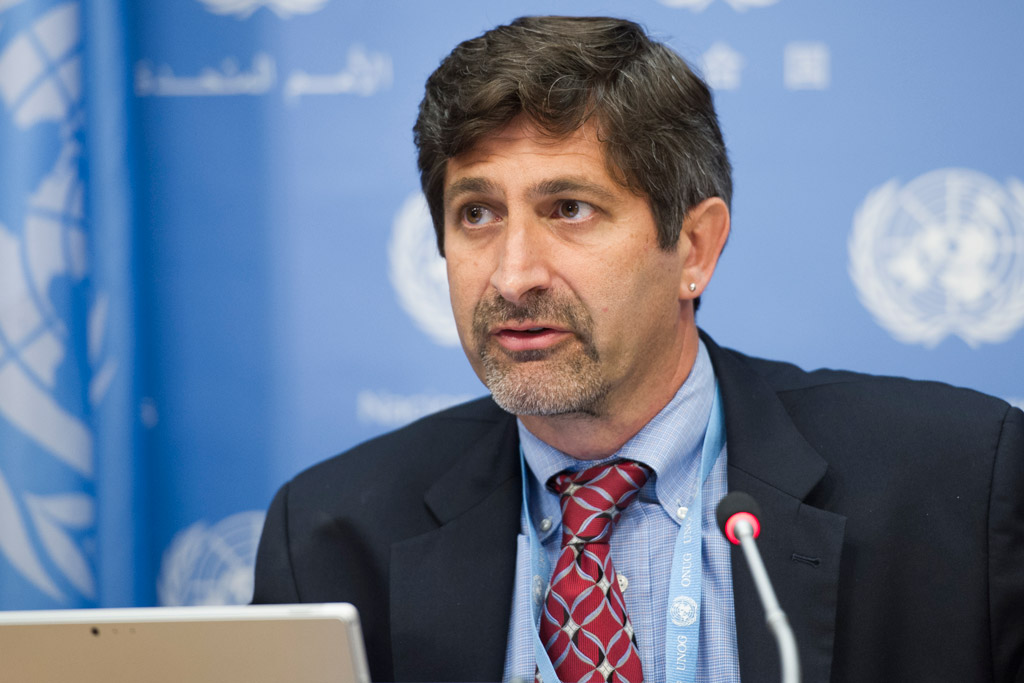