Recently, I attended the Gathering of Mesoamerican Peoples where I heard this:

“Faced with the threat that the mining industry represents in Mesoamerica, we call out to the peoples and communities of Honduras, Guatemala, El Salvador, Puerto Rico, Argentina, Canada and Mexico to strengthen our networks of resistance and to build broad alliances based on our knowledge, within which the defense of territory forms the basis of our connections.”

Declaration from the Gathering of Mesoamerican Peoples: “Yes to life, No to Mining” January 17-20, 2013 – Capulálpam de Méndez, Oaxaca, México

“Today Capulálpam finds itself in a constant struggle against mining operations. It is not that we are against progress,” Municipal President Juan Perez Santiago told the four hundred to five hundred-strong people as he opened the conference. “We are against irreversible consequences that this type of activity leaves behind. After many years of mining activities, we’ve lost thirteen (13) different water sources, contamination of the rivers, we’ve lost the fish. A lot of the waters sources have been contaminated by toxic materials. Today we are saying NO to mining because our environment is in need of our protection. We need generations who are not at risk of suffering the decisions made by the previous generations.”

Capulálpam and several surrounding communities have chosen to confront the many decades of underground mining which has negatively impacted their central river and contaminated close to 50 % of their artesian springs and aquifers that sustain the life of the communities.  While the community-unified mining alliance successfully forced the Mexican government to address the toxic run-off and the stream degradation through the Federal Environmental Commission suspending the rights of the concession-holder, these suspensions are not always permanent.

Capulálpam is concerned that recent gold discoveries under its remaining springs will destroy their last source of pure water. Municipal President Santiago says, “The most important aquifer that maintains our community is at risk. This is the aquifer that sustains life throughout this watershed. It provides life to the watershed of Capulálpam.”

Up to the 1990’s, the mining industry was limited for foreign private interests until the Mexican government introduced the National Mining Modernization plan. This released 1.8 million hectares of mining concessions previously held by the Mexican government. Along with reforms to Article 27, which sets out the legislative frameworks for mining under the Mexican Constitution, existing communal lands could now be leased or sold for resource exploitation, “reversing the right of Mexican citizens to the communally-administered natural resources necessary to sustain life.”

When the North American Free Trade Agreement (NAFTA) was signed by Canada, Mexico and the United States and came into force on January 1, 1994, two (2) years after its implementation, the process for mining concessions had been streamlined and foreign ownership limits lifted in Mexico, bringing a huge increase to the number of concessions being granted.

Exploration concessions are valid for six (6) years and if a concessionaire wishes to go into production before the expiration of the 6 years, they may request an exploitation concession, which is valid for 50 years and can be renewed once for the same amount of time. Thirty percent (30%) of the national territory has been sold in blocks of fifty (50) year mining concessions by the Mexican government, mostly to Canadian corporations. During the Capulálpam conference, there were stories of intimidation, assassinations and environmental degradation perpetuated by the mining industry throughout Mesoamerica.

There are lessons to be learned for us as we discuss and contemplate mining development. Here in Canada, legislation has also been passed under Omnibus Bills C-38 and C-45 without consultation, limited debate, if any, and limited time for review, changing over one (1) hundred different pieces of legislation and regulations that will have significant impacts to the environment and Aboriginal and Treaty rights. They also change the public’s rights.

Approximately 99% of the lakes and rivers have lost their protection for navigation and environmental assessment meaning 32,000 rivers and 2.25 million rivers and could be vulnerable to industrial impacts and development.  Many of these waterways include lakes, streams and rivers that have and continue to sustain the indigenous way of life.

Last April 2012, the federal government announced natural resource projects will be moved to “one project, one review” policy with “fixed timelines” for major economic projects where Environmental Assessments (EA) are being “fast-tracked and streamlined.”

Aside from being rushed through the Canadian Parliament as an add on to an Omnibus Bill, getting the free, prior, and informed consent of the Indigenous Peoples recognized under Article 19 of the United Nations Declaration on the Rights of Indigenous Peoples (UNDRIP), to which Canada reluctantly signed under world-wide global pressure, did not occur.

UNDRIP Article 19  says that, “States shall consult and cooperate in good faith with the Indigenous Peoples concerned…in order to obtain their free, prior and informed consent  before adopting and implementing legislative or administrative measures that may affect them.”  [Emphasis added]

While Canada considers the United Nations Declaration on the Rights of Indigenous Peoples “non-binding” and nothing more than an “aspirational document,” it purports to uphold the “rule of law” while ignoring many legal rulings by the Supreme Court of Canada, such as this one triggering the Crown’s duty to consult:

“The foundation of the duty in the Crown’s honour and the goal of reconciliation suggest that the ‘duty arises when the Crown has knowledge, real or constructive, of the potential existence’ of the Aboriginal right to title and contemplates conduct that might adversely affect it.” There are a lot of outstanding lands claims dealing with land by Indigenous Peoples.

This Supreme Court of Canada obligation for consultation and accommodation was never properly discharged to the peoples to whom it is owed regarding Bills C-38 and C-45.

When the Crown in Right of Ontario attempted to allow mineral exploration projects to proceed in Kitchenuhmaykoosib Inninuwug (KI) without properly consulting the community, the Ontario Superior Court stopped the project saying that, “allowing the project to continue without consultation was a violation of Treaty # 9. The objective of the consultation process is to foster negotiated settlements and avoid litigation. For this process to have any real meaning it must occur before any activity begins and not afterwards or at a stage where it is rendered meaningless.” (Para 89)

Kitchenuhmaykoosib Inninuwug was the site of the signing to the adhesion to Treaty # 9 on July 5, 1929 of which KI is an original signatory. KI viewed the signing as developing a new relationship with His Majesty and His Subjects as equal partners not a mass land surrender as reflected in the treaty text. KI elders tell us that they agreed to share the land and its benefits. They did not entertain nor subscribe to engaging in a legal fiction to sign away land and resources which have been handed down through generations or to knowingly sell their birthright.

KI continues to ask for the law pertaining to its rights be respected and the land issues be resolved in a fair and just manner. Meanwhile it has had to insist that the rule of law pertaining to its rights be followed, pressuring the Ontario government who ended up having to pay out 2 mining/exploration companies and forcing Ontario to unilaterally withdraw land from prospecting and mining claim staking in KI territory, similar to what Capulálpam had to do to get the Mexican government to address the environmental degradation brought on by decades of mining in their territory. The site where KI asked the last exploration company to leave was an old mining site which has never been rehabilitated and its environmental and health impacts undetermined.

The federal government Bills C-38 and C-45 remove many protections for water, fish and the environment seemingly to push development at all costs while attempting to discredit and silence the voices who speak out as “radical” that “ threaten to hijack our regulatory system to achieve their radical ideological agenda.”

Throughout the globe and here in Canada, legislation is being enacted by governments to enable resource-hungry companies to exploit the natural resources at all costs. These resources are often located on the homelands of the Indigenous Peoples who are currently harvesting the abundance and surviving from the lands into which they were born.

The United Nations Declaration on the Rights of Indigenous Peoples Article 32 says that, “States shall consult and cooperate in good faith with the Indigenous Peoples concerned…in order to obtain their free, prior and informed consent prior to the approval of any project affecting their land or territories and other resources, particularly in connection with the development, utilization or exploitation of mineral, water or other resources.” [Emphasis added].

The Indigenous Peoples of Mesoamerica, including KI are taking similar stands “in defense of life, our sacred spaces, our forests, rivers, hills, sources of water and our children,” and are reaching out to people globally to support, ““A change in the economic and political development model that currently permits the looting of territories as well as a change in the authoritarian, colonial, military and patriarchal structure of governance. Respect for the decisions of peoples should be a fundamental part of the new relationship with nation-states. This means exercising the right to self-determination of Indigenous, campesino and rural peoples.”

Municipal President Santiago speaking from experience spoke eloquently against unbridled development and unsustainable mining practices: “We say No to mining because with mining we are exchanging life for death, life for destruction, the life that we see in our mountains and our forests. We want to make sure that the community of Capulálpam and all of the communities present here are supported in their struggle against mining.”

Here in Canada, legislation has been enacted to expedite resource extraction while provincial and federal governments make deals with companies in other countries for the untapped resources often located on indigenous homelands like the Ring of Fire in Northern Ontario. These deals are being made on the premise that there is unfettered access to the territories, which are lined with outstanding legal obligations through treaties and other constitutional mandates. At the same time, credible science offered by various environmental groups have fallen on deaf ears. Globally, the call of Capulálpam for building alliances and building the network of resistance echoes into Canada aligning with the cry – when injustice becomes law, resistance is the outcome.

John Cutfeet is a spokesperson for the Kitchenuhmaykoosib Inninuwug (KI) First Nation in the Canadian province of Ontario, author and indigenous rights activist. 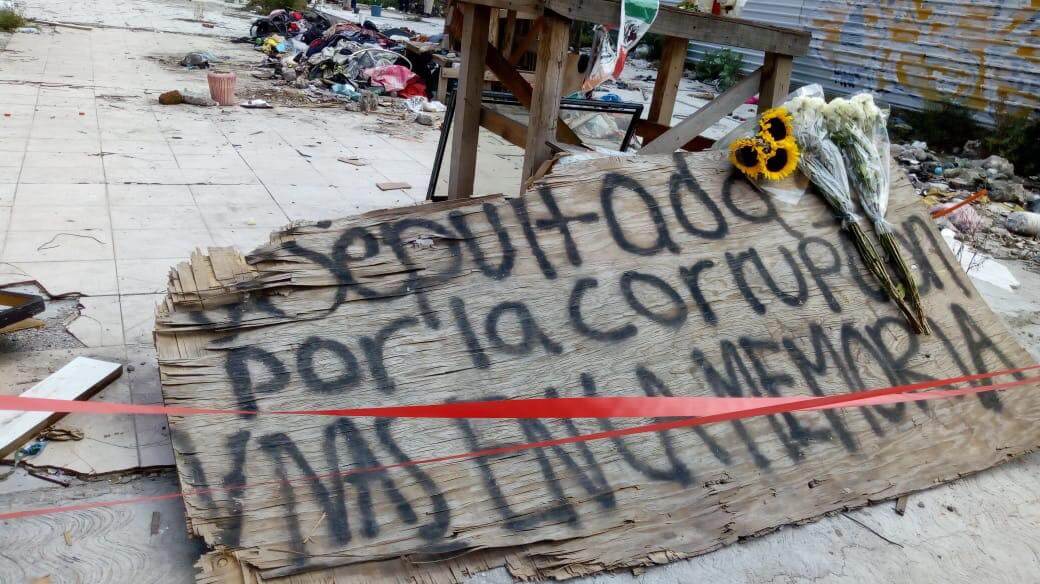