Against the sharply contrasting backdrop of violent conflicts in the streets and carefully staged official events, Enrique Peña Nieto took office yesterday. The general outlines of the plan for his six-year term, although still not detailed, reveal proposed changes not unlike the new president–mostly cosmetic and devoted to appearances on the surface.

After taking the oath of office in the Chamber of Deputies at San Lazaro and swearing in his cabinet, the newly inaugurated president appeared before guests at the National Palace in the central plaza to deliver his first speech as Chief Executive.
Peña Nieto began his speech with a rapid pass through Mexican history, citing prehispanic and Spanish culture, the liberal and revolutionary currents and “the recent past”. Without mentioning the PRI, he emphasized the orderly change of power since 1934 and “accelerating democracy”, ironically dating from 1968–the year his party massacred hundreds of students in Tlatelolco.
He concluded with what would be the tonic of the speech-that Mexico is “ready to take off” and “everyone agrees that we have an historic opportunity.” His speech centered on the “Mexican Moment”, the idea of a turning point when Mexico would finally enter into a period of peace, prosperity and global recognition.
He did mention the challenges along the way, stating that Mexico is a nation that “grows at two speeds, one of progress and development and the other in backwardness and poverty” and citing the lack of employment and educational opportunities. His speech included a number of specific if not detailed measures that provide fodder for analysis.
Peña Nieto began with the “five strategic points” of his new government:

1.     Mexico at peace: Peña offered to “put the citizen at the center of security policy.” He referred to this as a “change in paradigm”, without mentioning the drug war by name or the 60 to 80,000 killed under this model during the Calderon administration. He promised greater coordination between agencies and an effort to combat impunity and concluded,  “There can be no security as long as there is no justice.”

2.  An inclusive Mexico: Peña Nieto promoted to build an “inclusive” Mexico and close the gap of inequality so all mothers and fathers can support their families. He said Mexico should become a fair, middle-class society.

3.  Quality education for all: that educates students to be responsible and committed to their communities.

4.  Economic growth: through greater competitiveness, more credit, more investment in infrastructure, strengthening the domestic market and expanding the global market so Mexico can take its place as an emerging economy.

5. Mexico as a responsible global actor: Participation in the world through modern diplomacy, so Mexico becomes a factor of stability in the world and a voice that defends liberty. He also used this point to thank the leaders from abroad present.

Behind the promises
The five points are formulated in vague terms, as is usually the case with presidential promises. However, we can use what was said to anticipate the challenges and possible contradictions they pose, and gauge the political will to carry them out over the next six years.

Security policy. Peña Nieto explicitly referred to “a change in paradigm”. This is notable, since it is what the peace movement and critical analysts (CIP Americas Program among them) have been calling for for years. But there is very little in the strategic point or the “13 decisions” listed afterward to back it up.

A real change in paradigm would require two measures that the Peña government has said it will not take: withdrawing the armed forces from counternarcotics efforts and renegotiating security cooperation with the U.S. government. Peña has proposed a “gendarmery”, which is a militarized police force, or a military force charged with police duties among civilian populations. This is what Mexico already has, as the lines between police and military have been blurred precisely by the drug war. Without a plan for reducing militarization, promises to “rethink” the drug war pale.

The U.S. government has actively promoted and supported the drug war model of enforcement and interdiction through the Merida Initiative and spearheaded the massive expansion of U.S. counternarcotics activities in the country. Although both the US and Mexican governments have privately (in Wikileaks cables) and publicly admitted that the strategy has not worked — they insist it’s just a matter of time–the response is to continue with no major adjustments or real evaluations.

U.S. defense, intelligence and security companies depend on the Mexican drug war to obtain multi-million dollar government contracts. The Pentagon and other U.S. agencies have achieved unprecedented freedom to act and even direct actions on Mexican soil as a result of the Merida Initiative. The hawks in government and the war industry will not give that up easily. Peña Nieto knows that and he also knows that his nation’s economy is highly dependent on its northern neighbor. U.S. politicians worried aloud that his government would attempt to negotiate deals with drug cartels, an option which is practically impossible now due to the changes in structures of organized crime. Peña Nieto has reassured the U.S. that his administration will continue the drug war.  That means continued deaths, disappearances and social upheaval. There is no mention of redefining security or human security, although the concept of putting the citizen in the center, rather the state, could be construed as coming closer to that concept.

Referring to the need for justice and eliminating impunity is a politically correct but unsubstantiated move. Impunity underlies government institutions and the corruption of the justice system historically is a PRI construct. Impunity has to be attacked from above, because it has been condoned and even promoted from above for so long. The examples of what has happened to former PRI governors accused of serious crimes against the population such as Ulises Ruiz in Oaxaca and Mario Marín in Puebla and even Peña Nieto himself for his role in the murders and rapes in the community of Atenco are illustrative. Nothing at all has happened to them. The teflon coating of PRI politicians has been carefully preserved, with a few notable exceptions such as ex-governors Tomas Yarrington (charged and on the run) and Mario Villanueva (extradited to the U.S.), who have been prosecuted for drug war crimes at the behest of U.S. authorities.

Economic policy: Making Mexico truly “inclusive” would require some structural changes in economic policy that are not likely to come about in a Peña government. The goal of this strategy is largely contradicted by the formula for economic growth indicated in the fourth point and in other statements by the new president.

He has committed to deepening rather than fixing NAFTA, meaning the countryside will continue to be decimated by unfair competition with subsidized U.S. agricultural imports and the state is barred from basic measures such as favoring national industries in purchases and contracting or protecting vulnerable sectors from oblivion. Strengthening the internal market while expanding the global market sounds great, very balanced, but in reality they require different, and often contradictory, policies.

For example, building a strong domestic market requires supporting national production, which is logical and needed but prohibited under neoliberal trade rules, where Mexico is a world leader in signing draconian free trade agreements. It also requires having a population with purchasing power, while emphasizing foreign investment and being competitive on a global market rigged against workers requires suppressing salaries–something Mexican governments have been doing over the past three decades of PRI an PAN governments.

The laudable goal of investment in infrastructure begs the question of ‘investment for who?’ and leaves open how the administration will deal with controversial infrastructure projects that violate indigenous and human rights. More credit would be a good idea, but up to now what little has been available has gone overwhelmingly to large and powerful producers, further skewing the distribution of income.

Improving education: This requires two major moves–devoting more public resources to education and taking on the entrenched leadership of the corrupt teachers’ union. Several analysts have stated that the appointment of Emilio Chauyfett as Secretary of Education is a blow to Elba Esther Gordillo, the life-long leader of the teachers’ union (SNTE). I am not convinced.

Gordillo is a political operator who climbed to the top by wielding the power of an enormous machine for generating votes and political clientele. This machine was created and sustained by the PRI. Her capacity to exchange favors allows her to call the shots in the nation’s education system. To change that would require democratizing the union. The principle forces to democratize do, and must, come from below. The CNTE, organized to crack open the patronage and corruption of the union, is largely anti-PRI and opposed Peña Nieto. His administration is unlikely to do anything that would strengthen the grassroots union democracy (his party blocked the transparency in union matters part of the labor reform) or permanently alienate the SNTE leadership.
Global affairs: So little of substance was said here that it’s hard to know what the Peña administration will change. The written version speaks of restoring Mexico’s rightful place in the concert of nations” as a “country supportive and committed to the best causes of humanity”. It’s anyone’s guess what that refers to. Peña Nieto told Wolf Blitzer of CNN, who pointedly asked what relations with Castro and Hugo Chavez would be like, that he would be building relations in the south and north. This is a recognition that the PAN governments were early exclusively oriented northward to the U.S. and hostile to center-left governments of the South.

Mexico has at times acted as a U.S. proxy in the region, causing other countries to view it with certain suspicion. The U.S. government has actively used the Mexican government in this sense. As the Obama administration pushes divisions in the region with the Pathways to Prosperity program that allies only nations that agreed to sign free trade agreements with the US and increasing military presence of allied countries under the drug war strategy, it will not be easy for Peña Nieto to trace a neutral or balanced foreign policy within the hemisphere, if that is indeed the objective.

Opposition organizations have vowed to shift their efforts from challenges to the elections to challenges to policies they believe harmful to the country. The center-left leader and former candidate Andrés Manuel López Obrador refused to recognize the new president and is building a new party. The youth movement now is stunned and angered by the violent response of the police. while also calling on its members to reject violent confrontation.

The most commonly heard phrase from analysts following Peña Nieto’s inaugural speech, is “the devil’s in the details”. Although Peña Nieto followed up on these five strategic points with 13 decisions that included more specific actions, he still left much room to speculate.

Political promises are often, if not usually, set aside when the real task of governing begins, and one is left to wonder if they were sincere and not practical, or designed to build an image, not a government. The PRI is well-practiced in the art of simulation, of developing a public discourse and a backroom practice.

In any case, the country and the rest of the world now have more clues as to what the return of the PRI will mean for Mexico, for the United States and for the region. 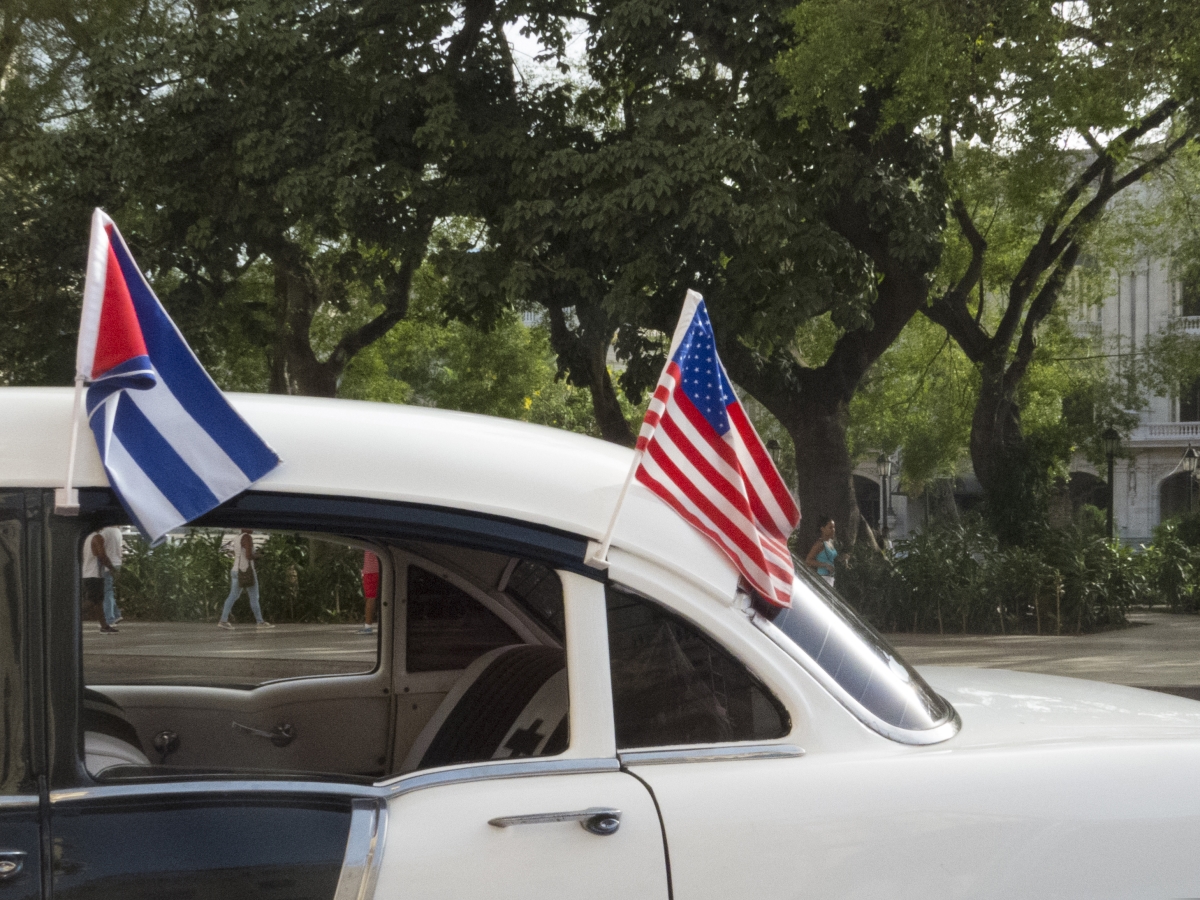 The Diplomatic Breakthrough in Havana

Fathers, Mothers and Lost Children Travel Together on the Caravan for Peace