Mexican law and the country’s official adherence to international standards uphold the rights to freedom of union association and collective bargaining. But for Mexican electronics workers, the right to freely unionize doesn’t exist in practice.

“It’s a very serious situation that no possibility exists of unionizing, even though the law says differently,” contended David Foust, Guadalajara coordinator for the Mexican Labor Rights and Action Center (CEREAL).

CEREAL, a Jesuit-backed organization that informs workers of their rights and advocates with employers on behalf of their interests, recently released its seventh report on employment conditions for the estimated 600,000 workers in the large Mexican electronics industry, especially in the country’s Silicon Valleys of metropolitan Guadalajara and the Mexico-U.S. border cities of Tijuana, Mexicali, Ciudad Juarez and Reynosa.

Besides the lack of freedom to organize unions, the report explores the ongoing trend of “flexibilization”, that includes the widespread use of temporary workers and few or no guarantees of working hours and compensation, violations of overtime law, the use of false or “protection” unions to contain labor force discontent, discrimination against women workers, and health and safety dangers in workplaces that employ chemical solvents and other toxic materials. The study finds that a number of specific multinational corporations that boast of their commitments to international labor standards, sustainable environmental practices and good business ethics through their membership in the Electronics Industry Citizenship Coalition (EICC) are guilty of these practices.

The report includes the responses of several companies to the issues raised by CEREAL, including Foxconn and IBM.

The daily working realities examined by CEREAL are not unique to Mexico. On the contrary, they represent trends sweeping the globe.

“The flip side of flexibilization is an increasingly difficult climate for unions and union members,” Bjorn Claeson, coordinator of Electronics Watch, an Amsterdam-based NGO that monitors the global high-tech industry, wrote in an e-mail.

“Unions of course demand predictability, stable hours, shorter shifts, the right to refuse overtime, and union workers cost more (in the short term, perhaps not in the long term) than ‘flexible’ workers.”

Virtually all of the electronic products manufactured in Mexico are exported abroad. CEREAL’s assessment of labor-management relations in the industry concludes that the so-called audit process, in which multinational corporations voluntarily pledge to respect and monitor codes of conduct and best practices up and down the global supply chain, has reached an impasse. For years, CEREAL has participated in EICC meetings ostensibly held to build better workplaces.

CEREAL worked with CANIETI, a Mexican electronics industry trade association, in a process that “helped many workers to solve problems and to improve their quality of life,” according to the labor advocates, adding, “This dialogue was praised as good practice by leading companies.”

Last year, however, CANIETI announced it would work instead through an official Mexican labor-certification process.

According to Foust, CEREAL annually advises between 1,000 to 1,500 workers, mostly from the electronics industry, about their rights. The group also conducts workshops and assists with legal complaints.

CEREAL’s report documents worker protests in the electronics industry, including the historic movement for livable wages, independent unions and decent work that erupted in Ciudad Juarez in 2015.

At that time, hundreds of workers from Lexmark, ADC/Commscope, Foxconn and Eaton factories took to the streets, waged hunger strikes, organized camp-outs in front of the plants, and filed petitions for independent unions with the government’s Labor Arbitration and Conciliation Board (JLCA). Many of the workers involved in the protests were fired from their jobs. In one work stoppage, police came in to intimide the workers.

Foust called the 2015 Juarez movement “an awakening” that brought “much hope” to the border city. Nonetheless, many of the activist Juarez workers later accepted monetary settlements from their employers in return for dropping their complaints, leaving the critical demand for independent union representation largely unfulfilled.

“We can’t consider it dead,” Foust cautioned about the state of the Juarez workers’ movement. He added that labor organizing continues below the radar.

In an interview earlier this year, Brian Finnegan of the AFL-CIO noted that foreign electronics and other companies are ramping up production in Juarez, where labor costs have sharply declined compared to countries like China due to the plunge in the value of the peso to the dollar and other factors.

The AFL-CIO joined more than 30 international labor, human rights and student groups that sent a letter to Lexmark management last March in support of Juarez workers who had maintained a months-long protest encampment across from company property.

But Finnegan said such movements are difficult to maintain in the absence of a national labor organization that can provide a protective umbrella and practical support to striking workers, who live hand-to-mouth even in “normal” circumstances.

Investors, on the other hand, gained rights under NAFTA in that they can sue in special NAFTA tribunals as opposed to simply appealing to the voluntary will of member governments, he stressed.

Many Mexican electronic workers are officially represented by unions that the employees do not even know exist. “These are unions that have been duly formed and registered in front of a labor authority, but actually, they only exist on paper,” the CEREAL report states.

“They do not hold meetings or assemblies, and do not organize elections or negotiate contracts with these companies. Their boards of directors include people no one has ever met; they never go on strikes or stop production….”

The presence of “ghost” or “protection” unions as obstacles to the formation of representative unions and usually affiliated with the ruling Institutional Revolutionary Party is certainly not new in Mexico, but it’s noteworthy that CEREAL documents the continuation of this practice in the 21st century in an industry that crafts an image as hip and futuristic.

In Guadalajara, for instance, CEREAL reports that electronics companies have formal union agreements yet the city has experienced no strikes in the sector during the last ten years, despite discontent over pay and other working conditions.

Foust said the sweetheart agreements could be considered a variant of protection schemes.

“We see cases where there is a payroll deduction (for the union) and cases where a company simply pays directly to the union,” he added. “It’s not like you’re paying Al Capone, but it’s in the sense that the place that should be occupied by the workers is occupied by a yellow-dog union.”

IBM is quoted in the CEREAL report defending its current collective bargaining pact on the grounds that it allows worker representation that prevents “abuses to Mexican Labor Law” by a “hostile labor union-not selected by the employees-that can extort the company and the employees themselves.”

However, in a 2015 random survey of 120 IBM employees, CEREAL found that not a single worker questioned knew the name of the union that had signed the collective bargaining agreement with their employer.

In profiling the lot of workers in Mexico’s vibrant electronics production business, CEREAL detected a host of problems and irregular conditions ranging from repetitive motion injuries to unsafe transportation. As an industry, electronics is perhaps the crown prince of the global supply chain: production is contracted from a brand company to another producer company, which in turn frequently sub-contracts employees from a temp agency.

After interviewing Jalisco electronics workers, CEREAL researchers determined that 52.9% of the respondents were recruited by 10 different labor outsourcing firms, with the transnational company Man Power representing 33.4% of the outsourced workers.

Getting the workers to and from the production facility is also another task of outsourcing-and a dangerous part of the job. In production centers that include Tijuana, Ciudad Juarez and Guadalajara, sometimes fatal accidents involving transportation companies are common. In one 2014 Baja California incident reviewed in the report, a Samsung worker described how the apparent blowout of a tire on a contractor’s bus led to a crash, killing one person and injuring 25 workers.

“…When we went to the IMSS (Mexican social security) hospital, somebody from our company, or the transportation company told the staff that we were coming from Rosarito, and that this was not a labour-related accident. They did not want to pay the full compensation from labour-related risks,” the report quotes a worker.

According to CEREAL, the same company was involved in another fatal accident transporting workers in 2015.

Low pay remains a core complaint of workers, forcing many to work overtime or engage in moonlighting to survive. Between April and June 2015, CEREAL found that 58 percent of electronics workers earned an average of 114 pesos per day, or less than ten dollars per day at the time. The pro-labor group noted that 114 pesos covers only 30 percent of the basic food basket as defined by National Autonomous University of Mexico researchers.

Up against a global juggernaut, Mexican electronics workers are nevertheless waging myriad battles aimed at improving their employment circumstances and achieving decent treatment in the workplace. In a gradual but steady way, their struggles are finding common ground with others and receiving more international attention.

Another innovative form of solidarity is seen with public procurement campaigns, where public institutions are pressured to purchase goods solely from companies with decent labor policies and sustainable environmental practices.

“I do believe this can be characterized as a growing trend at least in Europe and North America,” said Electronic Watch’s Claeson.

Claeson added that he’s unaware of public institutions “taking action to hold contractors accountable for labor rights breaches in (Mexican) electronics factories,” but that a precedent had been set by U.S. cities acting on rights violations in Mexican apparel plants.

Foust also identifies public procurement as a key arena in the labor movement, estimating that the U.S. government alone purchases 7% of global electronics products. The Mexican worker advocate stressed the importance of different forms of global action, whether it’s through letters like the one sent concerning the Lexmark protests, or consumers demanding better labor conditions from companies that produce the products they buy.

“International solidarity is fundamental because it’s globalized,” Foust said. “All of capitalism is globalized, but especially this industry–it’s the most advanced example. Workers have to respond in the same way. As someone said, ‘We have to globalize hope.’” 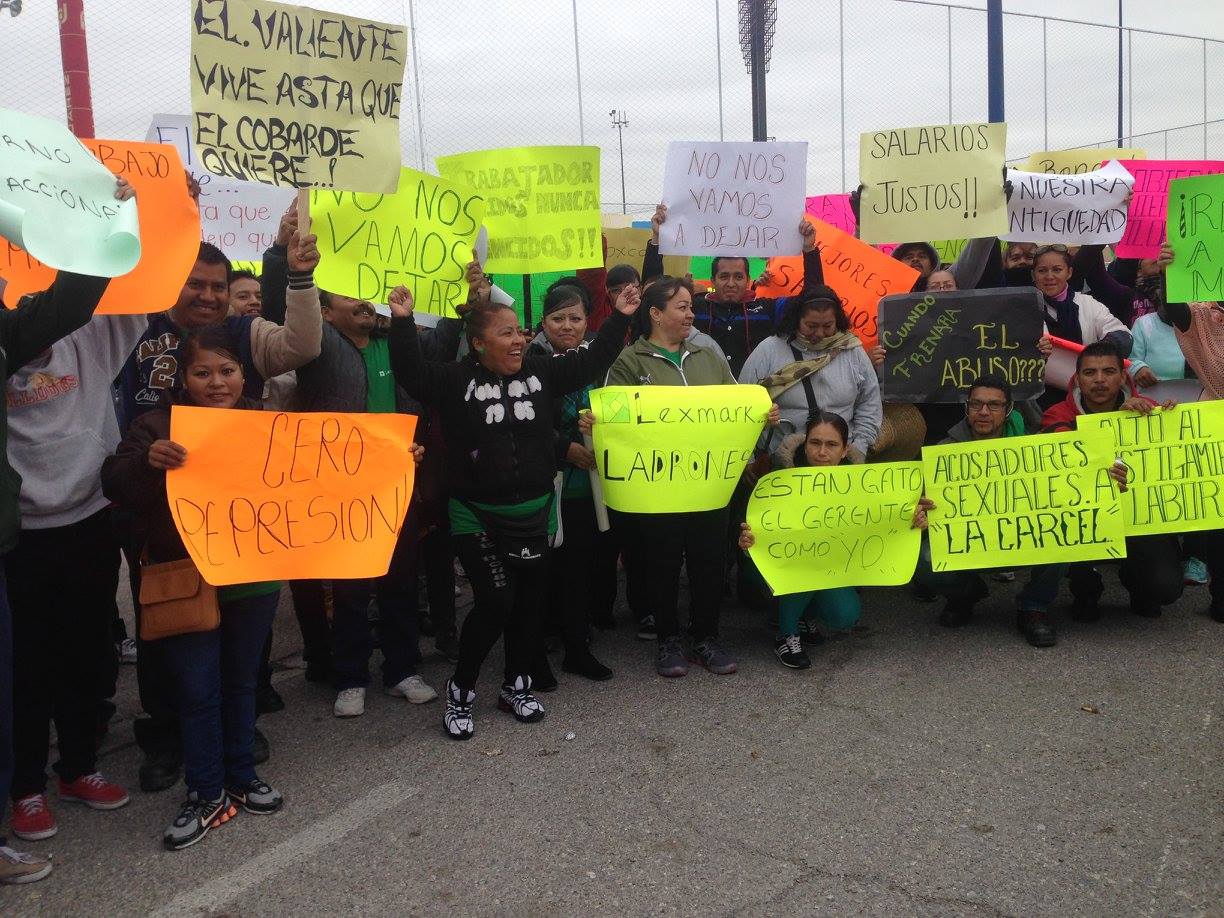