The uprising in Ecuador that occurred on September 30 shook the world and sparked a debate about the reason for the unrest. Groups of police and members of the armed forces, disgruntled over a law that, among other aspects, eliminates police bonuses, took to the streets in protest. When President Rafael Correa went out to talk to the police, he was attacked with tear gas and later held captive in the police hospital as police officers continued to attack unarmed citizens.

A military command freed the president later that day. Three people are reported dead. Correa immediately spoke to the crowd and media that night, denouncing the incident as a coup attempt and vowing to investigate and prosecute the instigators.

There’s no question that the police uprising went way beyond a labor dispute. The president was captured and held against his will for half a day until the armed rescue operation by the military. Correa stated that the armored car he rode in after his rescue was fired on repeatedly. A recently released recording of police band communications contains statements urging the assassination of the president, which Correa claims was “Plan B” if destabilization failed. He accused former president Lucio Gutiérrez (2003-2005) of being behind the attempted coup.

The Organization of American States issued a press release on Sept. 30 calling on governments to “stop the coup d’etat from becoming a reality.” Recognizing the seriousness of the situation, the organization resolved “to repudiate any attempt to alter the democratic institutional system in Ecuador.”

The U.S. State Department also released a brief statement during the stand-off in Quito, calling for “the peaceful restoration of order.” On Oct. 1, Secretary of State, Hillary Clinton spoke with Correa to express support. State spokesperson P.J. Crowley backed off of calling the uprising a coup but did admit that “to some extent, [it] did represent a challenge to the government.”

The Ecuadorean coup attempt presents a challenge to the U.S. government to review its actions and reaffirm its commitment to democracy in the Hemisphere. Words are not enough.

The U.S. State Department played a major role in blocking the return to power of elected President Manuel Zelaya following the rightwing coup in Honduras on June 28, 2009. That coup was allowed to stand for seven months and orchestrate elections for its successor, despite a boycott by the national pro-democracy movement and the refusal of most governments in the region (with the notable exception of the U.S.) to recognize the resulting government of Porfirio Lobo.

Latin American leaders warned that Honduras would set a dangerous precedent for the destabilization of progressive governments. Correa even commented that he had evidence that he was next on the list. Now that this dismal prophecy has been proven correct, the U.S. government has some soul-searching to do. If the U.S. purports to stand for democracy, it must stand for democracy in all cases. Correa’s government has been criticized for its alliance with the Venezuelan-led ALBA group of nations and deemed an enemy of U.S. interests by conservative currents in Washington. But powerful interests must not be allowed to speak for the interests of the rest of us. In fact, Ecuador has made some bold moves recently that can be seen as examples for all people.

Ecuador’s decision to prohibit oil exploration and exploitation in the Amazonian Yasuni National Park is one of the most far-reaching environmental accords in history. Judging that the environmental and social costs of drilling outweighed the billions of dollars in potential income, the nation devised a plan whereby the international community compensates Ecuador for keeping the oil in the ground—thus preventing the destruction of that part of the Amazon and the climate impact of burning the resulting oil. The money would be used for sustainable energy development and protecting the park. It’s one of the first real proposals for a sustainable post-fossil fuels society amidst a lot of talk.

Other ground-breaking measures include the integration of “the rights of nature” in the nation’s new constitution and the refusal to extend the U.S. Pentagon’s lease of the Manta army base. In a historic bid to break the stranglehold of the international finance system on the poor nation, the country conducted an in-depth study and renounced $3.2 billion in illegally contracted debt; after the devastating financial crisis, standing up to big finance is an important example for the rest of the world.

It is too soon to make blanket statements one way or another regarding possible involvement—direct or indirect—of agencies of the U.S. government in the coup attempt. Members of the Correa government have stated that they do not believe the Obama adminstration was involved, though they have not discarded the possibility that rightwing forces in the U.S. played a role.

The U.S. was actively involved in training the anti-narcotics unit and many of the police units that participated in the coup attempt. This is good opportunity to call for a review of these programs. The experience of the School of the Americas—whose graduates have engaged in human rights abuses and supported coups across Latin America—indicates the need for close citizen and Congressional oversight.

As Ecuador restores order, the coup attempt should alert U.S. citizens and government to the need to stand firm for democracy and not permit another Honduras to happen, with its heavy toll in human lives and human rights. Correa’s government must resolve serious challenges in its own country, and the U.S. must make sure none of its actions undermine that effort.

This article was originally published by YES! Magazine, “a national, nonprofit media organization that fuses powerful ideas with practical actions.” 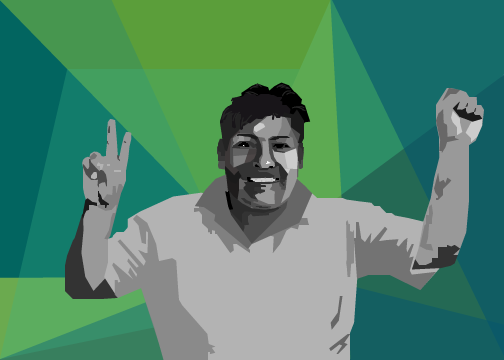 Slideshow: Inside the Tents of the U.S. Occupy Movement