Paris seems ready to birth the historic agreement against global greenhouse emissions that cause climate change. On the eve of the COP21, the official two-week climate summit that will bring together governments from over 190 countries and hundreds of civil society organizations and activists on all sides, the city exhibits its usual mundane rhythm. Only the deployment of small groups of military police in the busiest sites and tricolor flags in windows and building entrances remind that just two weeks ago the city suffered attacks that claimed the lives of 130 people.

There are urgent reasons to arrive at an agreement in Paris. This year was already recognized as the warmest on record and surpassed the mark of 400 parts per millions of carbon in the atmosphere. Climate change also is claiming victims, especially in poor countries. This has generated a movement to avert climate crisis of unprecedented force, with mobilizations throughout the world, such as those that have occurred in the past few days.

The United States and China, the countries that produce the most pollution in absolute terms, have stated that they will climb into the ring against carbon dioxide emissions. The governments of the seven richest countries (G7) have agreed to decarbonize the world economy by the end of the century. In addition, some 170 countries presented their emissions reduction pledges before the Summit.

Everything indicates that Paris will produce an agreement. The problem is what kind.

The agreement could be ambitious, universal, binding, based on real-world solutions that include a necessary accelerated path toward clean energy, leaving most of the known reserves of fossil fuels underground.

Everything indicates that Paris will produce an agreement. The problem is what kind.

Or, if the oil corporation lobbyists win, it could be an agreement founded on chimeric, marginal or commercial proposals such as geo-engineering, that aim to capture and confine carbon, or putting limits on solar radiation.

We should not forget George H. Bush’s statement upon arrival at the Earth Summit in Rio: “The American way of life is not negotiable.” A lifestyle impossible to maintain with equality, whose continuity has cost the world twenty years of failed climate negotiations.

Whoever looks for hope can find it in the increasing public awareness and knowledge of the issue, in the positions of important moral leaders such as Pope Francisco and in the collective global mobilization announced for the days of the climate summit. In any case, Paris 2015 is not the arrival port, but the beginning of a new phase of prolonged and profound struggle.

From Sao Paulo to Mexico and New Delhi, from Kampala to Ottawa and Tokyo, hundreds of thousands will take the streets as part of the more than 60 marches in major world cities and more than 2,300 actions scheduled in over 150 countries to increase pressure on governments and demanding an ambitious global climate agreement.

Following the attacks in Paris, the French government has banned demonstrations. But the people gathered at the conference will carry out dozens of activities inside and French activists have called for people around the world to march on their behalf, in solidarity with them and with the people affected by attacks in Beirut, Baghdad, Mali and elsewhere.

They have proposed creative ways to protest. The Paris metro stations have large signs with the image of the 21st Climate Coalition and the campaign: “Our shoes will march for us.”

Comprised of more than 130 civil society organizations, including Attac, 350.ORG, Avaaz, Confédération Paysanne, Action Contre la Faim, Les Amis de la Terre, Humanité et Biodiversité y Alternatiba, the Coalition launched the “Shoe” Initiative. They collected donated shoes to display them at the Square of the Republic in Paris Sunday, symbolizing those who cannot march because of the emergency measures imposed by the French Government.

They also intend to form a human chain near the Square of the Republic and all the way to the Nation Plaza, along the suspended march route. The human chain will carry posters and slogans whose main message will refer to the climate state of emergency, the demand for a climate of peace and peace for the climate. The action will be held on sidewalks to not obstruct traffic. However, they have not ruled out actions of civil disobedience by direct-action groups.

The coalition has also created a virtual platform to connect protesters from around the world with those who cannot march in France, Lebanon and elsewhere, to create a sense of solidarity, and ensure that those who can march do so on behalf of those who can’t.

The COP21 has just begun.

Sent from Paris. Alfredo Acedo is a journalist and director of communications of the UNORCA. He is a contributing writer to the Americas Program www.americas.org . This report is part of Americas Program’s COP Chronicles series.

“The Paris Accords Will Cause the Planet to Burn”
http://www.americas.org/archives/17774 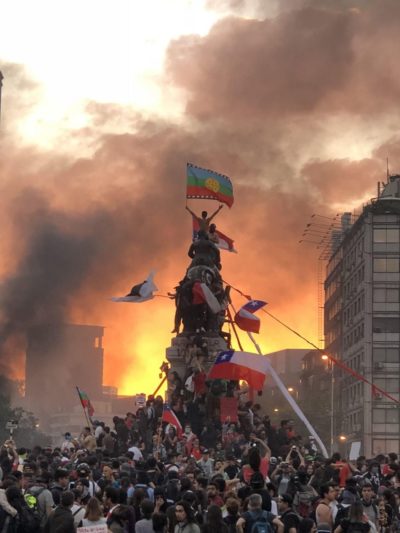