Just days before the general elections in Argentina, the ruling party has bet all its money on winning the election in the first round. The Front for Victory (FPV), with the governor of Buenos Aires Daniel Scioli as its candidate, got 38.4% of the vote in the August primary and the numbers of the most recent poll indicate that he could easily win the elections on Oct. 25. Meanwhile, Mauricio Macri, the candidate for the Cambiamos party, and Sergio Massa, candidate for UNEN, compete for second place, although the polls favor the former, who won 30% of the vote in August.

Macri and Massa are both opposition politicians, but that doesn’t mean they are the same. Massa, a representative of right-wing Peronism, is a former national government functionary who distanced himself from the ruling party during the legislative elections of 2013. Macri and his PRO party represent a new right-wing force that has governed in the city of Buenos Aires since 2007 and is participating in national elections for the first time. On the other side of the spectrum, Daniel Scioli, the candidate for the ruling FPV, presents himself as the continuation of the government of Cristina Fernández de Kirchner.

The FPV has governed the country since 2003, first under Nestor Kirchner and later Cristina Fernandez. During the Kirchner period, Scioli was vice president, president of the Justicialist Party, and representative in the national Chamber of Deputies. Since 2007, he has been the governor of the Province of Buenos Aires, which is the most important electoral circuit of the country, with 37% of voters. Buenos Aires will be very important in the federal elections, where not only the president and vice president will be chosen, but also senators and deputies for the Argentine Parliament and representatives for the Parliament of MercoSur.

According to the Argentine electoral system, there are two ways to win a national election without a runoff: to get more than 45% of the vote, or to get more than 40% of the vote and lead the second place candidate by at least 10%. This is why the election was moved to Oct. 25. Since Scioli won 38.4% of the votes in the Obligatory, Simultaneous and Open Primaries (PASO) in August, , the current objective is to close the six-point gap to get to 45%. The strategy targets the lower middle-class provincial section of the electorate, which does not identify symbolically with Kirchnerism, but which has seen concrete results of national policie such as the universal child allowance, employment growth, and others. However, the FPV is still far from being able to secure 45% in the election. The big question has become whether Scioli will be able to get 40% of the vote and hold a 10% lead over Macri, so that there will not be a second round in November.

Sciolism represents a continuation of Kirchnerism according to its leaders. This characterization is a response to the accusations of the media and the opposition questioning who will rule in Argentina after the Dec. 10, when Fernández’s term ends: Scioli or Fernández? Several important supporters of Kirchnerism are running for legislative offices that are fundamental to the national congress. Such a favorable legislative position would give them a degree of independence from the next executive, but at the same time, would cause the distance between them and the resources and decisions of the Casa Rosada to increase.

Another question is, what is Sciolism? His advisers feel comfortable defending him as a strategic and pragmatic man. A Scioli presidency will have less romanticism than his predecessor’s—cultural battles were prominent during Cristina’s presidency—and more buiding on gains. His cabinet, according to announcements, will be made up of Peronist governors. So, Scioli will form a two-part strategy: he will roll back the territorial power of the governors , expanding his own influence, and, at the same time, to distribute power to those who already have influence in the party.

The key word in the campaign is “development”–to build on what has already been done. Sciolism has its own think tank: the Foundation for Argentine Development (DAR), led by José “Pepe” Scioli, the candidate’s brother. The DAR is a factory for public policies that was founded in 2013 and has headquarters in a modern building in the center of Buenos Aires.

The DAR lists its research issues health, work, education, women, children and factories. According to Scioli’s economic team, the key is in strategic policies affecting the agro industrial sector, because it is the sector with the most capacity to generate income from abroad. And then to invest that income in highways, railroads, telecommunications networks and energy grids.

Mauricio Macri, for his part, is a businessman inside and out. He sees politics as an “administrative technique” to pursue objectives. Macri’s party, the PRO, was born out of two think tanks, Creer y Crecer and Grupo Sophia, after the collapse of the party system in 2001. Only in such a context could someone like Macri, then the president of Boca, appear a plausible candidate for the highest officer in Buenos Aires city government.

Since then, he has worked on creating a new party that has participated in the country’s public debates. They first presented themselves as “non-political,” and later as “the new politics.” They wanted to differentiate themselves from the “traditional,” and the “old.” They presented themselves as uncorrupted, as experts, and developed a new style of political marketing: balloons, fashionable songs, pompous yellow scenery, happiness and little debate.

During the first two terms that they lead the Buenos Aires city government, they were criticized for shortcomings in management, especially in health and education. In the final few weeks, Cambiemos faced a corruption scandal (known as “Caso Niembro”). Notwithstanding, even if the PRO does not win the presidential election, their participation will change the field: it is the first time that a center-right party—although an alliance—has done so well, and it will position the PRO as an important, relevant actor in national politics.

Sergio Massa is another story. He was Cristina Kirchner’s first Chief of Cabinet, entering that position a few months after she took office. However, Massa did an about-face in the legislative elections of 2013, and formed the Frente Renovador. Right-wing Peronists swelled the ranks of this new opposition coalition, and it won the strategic province of Buenos Aires. Two years later, the party’s performance in the primaries (PASO) surprised many, even though it finished third; some analysts had already written off the party as irrelevant, but it won 20% of the vote.

Since then, even Macri is campaigning for Massa’s defeat so that Cambiemos will have a higher chance of winning the election. But it is futile; the two parties keep fighting for second place, with bellicose discourse against drug trafficking as a principle strategy. The numbers are not responding, but they will need to lend attention to the makeup of the congress: as in 2013, when this strategy served them well. This time, it will be their central tool to achieve political power. For its part, the ruling party, who won 54% of the vote in 2011 to reelect Cristina Kirchner, will likely perform well in legislative elections and maintain a majority in the legislature. So, whoever the next president is, they will not have legislative majorities and will be forced to constantly negotiate.

At the end of the campaign, the opposition is striving to create the belief in chaos, breakdowns in authority and internal struggles in Kirchnerism. But although tensions do exist, it seems like the transition will take place in a climate of stability and tranquility.

And such a smooth transfer of power is news in a country that has had five presidents in a single week and has seen office-holders flee in helicopters or step down before the end of their terms. 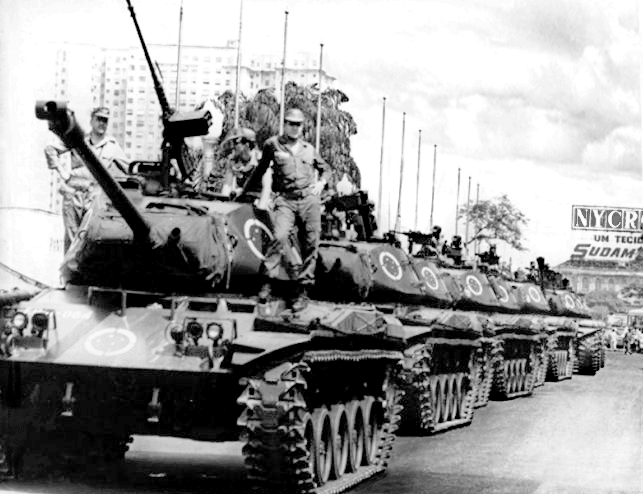