The Peace Accords signed by the government of Juan Manuel Santos and the Revolutionary Armed Forces of Colombia (FARC) at the end of 2016, took into account the need for integral rural development in building peace in Colombia. A major challenge was including the interests and needs of rural people, among them peasant, Afro-descendants, and indigenous women. They did this by including a gender focus in all chapters of the accord.

Isabela Sanroque, an ex-combatant of the FARC and a member of the political party Alternative Revolutionary Forces of the Common (also FARC, by its Spanish initials), explained the importance of the gender focus. “The sub-commission on gender in the negotiations for a Peace Accord allowed a discussion on the positions of the organizations of rural women on what this country should be.” She told the Americas Program that in the FARC the concept of gender equity never came up, so for her taking part in this sub-commission in the Havana negotiations underlined the importance of gender in peace.

Incorporating the issue of gender—and women—in the negotiations was unprecedented.  In the 1998-2002 peace negotiations carried out in San Vicente del Caguán, state of Caquetá between the government of Andrés Pastrana and the guerrilla forces, not a single woman took part in the guerrilla delegation.  In the recent Havana talks the sub-commission on gender included five representatives of the government and five of the FARC.

Despite this improvement, the perspective on gender failed to account for the reality that the women who had to be reincorporated into civilian life are very diverse.  The gender focus missed this fundamental fact and as a result the women of the FARC have been rendered invisible in the reincorporation process, despite comprising 40% of the group’s membership. The gender gap shows up in two critical spheres of life: production and reproduction. Women have special needs and interests and encounter different obstacles different from men in the same process of reincorporation. Women tend to face many more barriers than men, due to the mere fact of being women.

Women ex-combatants faced stigmas in relation to the full exercise of their sexual and reproductive rights while they were in the ranks of the group. Now, the possibility of maternity after the Accord was signed brings with it new needs.

Sanroque says that during the war, the FARC encouraged female guerrilla fighters to terminate pregnancies.  The mainstream media in Colombia contends that they obliged women to abort. A report by Oxfam claims that 1,810 women of the guerrilla group were forced to undergo abortions in 2011. The nation’s Attorney General maintains that the FARC will have to stand trial before the transitional court for 232 investigations into sexual violence within its ranks. Charges include forced abortion, forced sterilization and rape. Women former guerrilla members bear the stigma of a society that often assumes that they experienced diverse types of violence and sexual enslavement in the ranks.

According to Diana Acuña of the NGO Sinestesia, many women put off motherhood during the war, and are deciding to be mothers since the signing of the Accord. Many ex-combatants lack suitable conditions for being mothers at this stage of the reintegration. Motherhood could also may stall other aspects of their psychological and economic reintegration, such as access to education and financing of productive projects. The reintegration program does not posit strategies that articulate these needs, such as access to daycare and kindergartens.

None of the twenty-six Territorial Spaces of Training and Reintegration (Espacios Territoriales de Capacitación y Reintegración, or ETCR) in which ex-combatants of the FARC live within their community project, has child care services, such as daycare or pre-school programs, which means that these labors fall to the mothers. The ETCR of the municipality of Econonzo in Tolima, for example, has 50 children between 0 and 4 years old without programs. Sanroque asserts that there have been no initiatives for pedagogical training for those who might wish to work in establishing the project of child care services for the ETCR. The absence of a gender perspective in reintegration has led to three obstacles for the participation of former women combatants in decision-making:

Diana Acuña of the NGO Sinestesia, believes there was greater equality between men and women in the war than in reincorporation because in civilian life traditional gender roles are being reimposed. This creates the gender gap in trying to accede to decision-making positions.  Women ex-combatants in the political party of the FARC that emerged from the Peace Agreement, face obstacles in seeking seats in the Senate and House of Representatives. In the Senate, with five seats having been allotted, there are two women: Victoria Sandino and Sandra Ramirez. Of the five seats agreed on for the House of Representatives, not one is occupied by a woman.

The reintegration programs’ emphasis on the role of women in the family limits their role in peace-building by reducing it to restraining their partners from taking up arms again. Their options for living as law-abiding citizens must go beyond simply being housewives or mothers.

According to researchers Camille Boutron and Diana Gómez Correal, “Women combatants in effect embody a double transgression:  they not only break the law, they also break traditional gender stereotypes” (University of the Andes, Bogota, 2017). So, while in wartime they are treated more as equals, in reintegration the State obliges them to again take up their traditional gender roles. 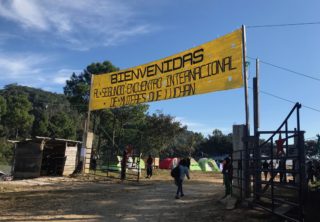 Can Women’s Grassroots Organizing Stop the Rise in Violence Against Women?